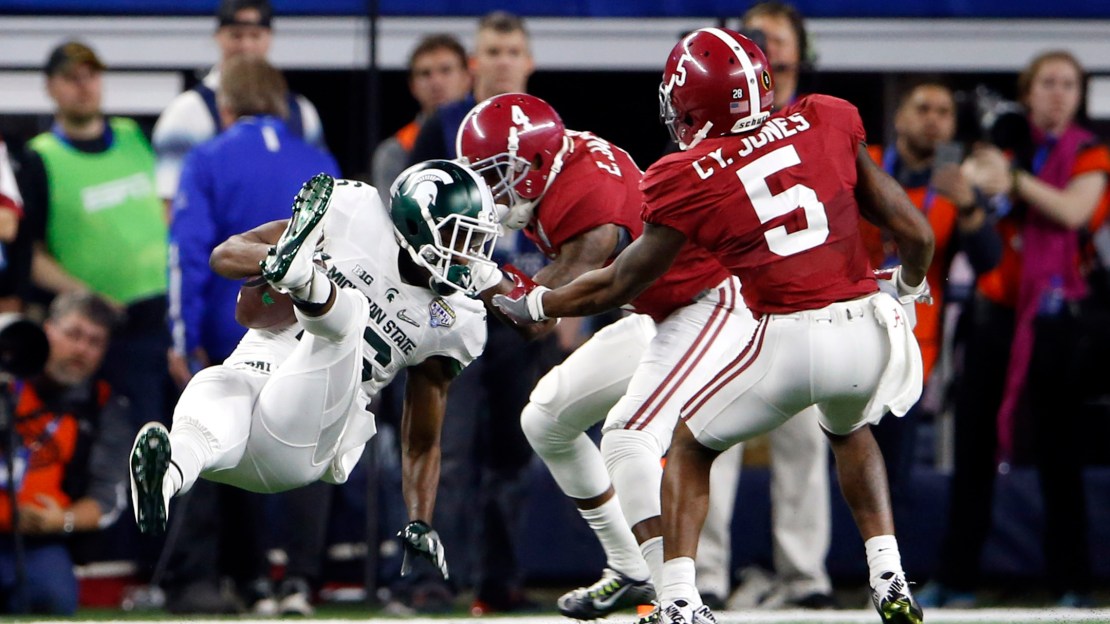 So many storylines dominated the Cotton Bowl matchup. Michigan State was making its first playoff appearance coming off a Big Ten title. Alabama was here last year, getting upset as the No. 1 seed by Ohio State, which went on to win the championship. Protégé (Mark Dantonio) was trying to beat mentor (Nick Saban). On it went.

In the end, it was all Alabama, which cruised to a 38-0 victory at AT&T Stadium in Arlington, Texas.

BEST OF THE COTTON BOWL

Best play: There were none for Michigan State. So, let?s go with the sensational 57-yard punt return for a TD by the Crimson Tide?s Cyrus Jones late in the third quarter that gave Alabama a 24-0 lead. Jones made a nice stutter-step move, a few cuts and was off to the races. Oh, Jones also had a huge interception late in the first half in the red zone to snuff out a MSU scoring drive.

"The Tide can smell that title game."

Cyrus Jones, 57 yards to the house and Alabama is in total control on ESPN.https://t.co/12B2zncVis

Best player: Alabama QB Jake Coker totally out played counterpart Connor Cook, hitting 25-of-30 passes for 286 yards and two TDs. His completions and yards were career-highs. His ability to hit passes down field made up for the less-than-sensational game for Derrick Henry, who had just 75 yards rushing on 20 totes with two TDs. Coker hit some big passes (50 and 41 yards) and didn?t commit a turnover. Huge.

Best moment: Well, from a Spartan perspective, it may have been the merciful end to this game. Otherwise, that 50-yard TD catch and run by the Crimson Tide?s Calvin Ridley late in the third quarter was spectacular, giving Bama a 31-0 lead. Ridley had eight catches for 138 yards and two TDs.

Best stat: 26, rushing yards for Michigan State, compared to 154 for Alabama. You hate to oversimplify things, but this stat succinctly summarizes the lopsided nature of the game.

Offense: F. Entering the game, Michigan State knew it would have a difficult time running the ball and it had to get a big game from Connor Cook. Sure enough, MSU has 13 carries for minus-9 yards rushing at halftime and Cook hit just 9-of-18 passes with a huge red zone pick near the end of opening 30 minutes. It continued in the second half, as the Alabama defensive line manhandled the Spartan front all night. MSU finished with 29 yards rushing (1.1 ypc), and Cook was under constant duress, hitting 19-of-39 passes for 210 yards with no TDs and two picks. Burn the tape from this game.

Just when it looked like Michigan State was ready to score ...

Defense: C-. The vaunted Spartan defense had to contain Derrick Henry, the 2015 Heisman winner who leads the nation in rushing. Henry went over the 2,000-yard mark for the season tonight but was held in check. In the first half, he had 13 carries for 38 yards and a long run of six yards. And for the game, he had just 75. But Jake Coker came up big, completing 16-of-20 passes for 177 yards in the opening half to stake Bama to a 10-0 halftime edge. Coker continued to roll in the second half, finishing 25-of-30 passing for 286 yards with two touchdowns as the MSU secondary struggled to cover. And where was Shilique Calhoun? Burn the tape from this game.

Special teams: D. Early on, the punters played a big role, as this game replicated a toe-to-toe slugfest with yards being difficult to come by. The punters did their part, often turning over the field and making the offenses work with bad field position. Alabama delivered the one big play, that being the 57-yard punt return for a TD by Cyrus Jones in the third quarter.

It was over when: It was just 10-0 at halftime, but the Tide exploded for 21 third-quarter points to coast to victory. Cyrus Jones? punt return was killer. But that was followed less than two minutes later by a 50-yard TD pass from Jake Coker to Calvin Ridley that made it 31-0. Yes, it was still the third quarter, but this game was over. MSU was toast.

A look toward 2016: No doubt, this loss hurts. But know this: Mark Dantonio has this program humming, winning at least 11 games five of the last six seasons. And the Spartans aren?t going anywhere. The biggest issue for the Spartans will be replacing Connor Cook, who will leave East Lansing as the school?s all-time greatest quarterback. And the defense will have a big chasm with end Shilique Calhoun gone. But there will be plenty of talent back to keep the Spartans in the chase in the Big Ten East.