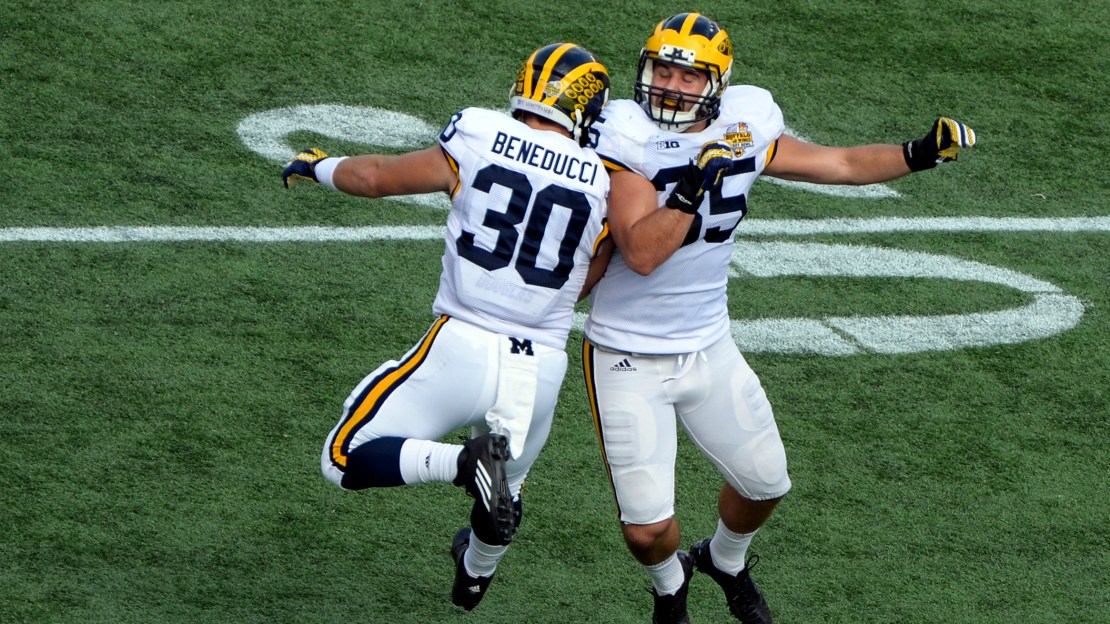 Jim Harbaugh closed out his first season as Michigan's head coach on quite a high note.

Senior quarterback Jake Rudock threw for 278 yards and three touchdowns, while the Wolverines' defense held Florida to just 273 yards of total offense in a commanding 41-7 win over Florida.

Here is a look at some final thoughts from Michigan's impressive victory.

BEST OF THE CITRUS BOWL

Best play: There were several good ones, but let's go with Jehu Chesson's impressive 45-yard catch late in the third quarter. Chesson's highlight grab set up a 2-yard touchdown run by Sione Houma, which made it 31-7 and put the game out of reach.

Best player: Michigan quarterback Jake Rudock was outstanding against a Florida secondary that was supposed to be among the best in the nation. Rudock hit 20-of-31 passes for 278 yards and three touchdowns en route to being named the Buffalo Wild Wings Citrus Bowl MVP. Rudock passed the 3,000 yard mark with his final completion of the day, making him just the second Michigan quarterback ever to throw for more than 3,000 yards in a season.

Best moment: With the game tied at 7-7 early on in the second quarter, Rudock connected with a wide open Chesson for a 31-yard touchdown strike. That gave Michigan a 14-7 lead and the Wolverines never looked back from that point on.

Best stat: 503. That's how many yards Michigan's offense put up against a Florida defense that ranked among the best in college football this season. In fact, the Wolverines were the only team to top the 500-yard mark against the Gators all season.

Offense: A. The Wolverines' offense was near unstoppable against Florida in this game. They put up 503 total yards on offense and spread it out, totaling 278 yards through the air and 225 on the ground. Most importantly, Michigan dominated time of possession in this game. The Wolverines held onto the ball for 36:13 on offense, compared to Florida's 21:22 time of possession. Overall, it was a dominant performance for this Michigan offense.

Defense: A. Michigan's defense was great from start to finish, holding the Gators to just 273 yards of total offense and limiting them to a measly 5.2 yards per play. The Wolverines picked off Florida twice in this game and limited standout running back Kelvin Taylor to just 50 yards on 11 carries. Remember, this came without D.J. Durkin, who served as the Wolverines' defensive coordinator this season before accepting the head coaching job at Maryland. Hats off to Greg Mattison and the entire Michigan defense for a standout performance in this game.

Special Teams: A-. This unit was solid in Michigan's commanding win over Florida. Kenny Allen was perfect, hitting both of his field goal attempts and going a perfect 5-of-5 on extra points. With the offense's dominant performance, the Wolverines only had to punt once, a 57-yard boomer from Allen. Florida totaled seven returns for 153 yards in the game, an average of just under 22 yards, which is solid.

It was over when: Early on in the third quarter, Rudock threw a bullet pass into the end zone that looked like it was going to be intercepted. Instead, it fell into the arms of Michigan freshman Grant Perry, which made it 24-7 and set the tone for the rest of the game. The Wolverines would go on to outscore Florida 24-0 in the second half. Impressive.

Grant Perry with the 3-yard score!

A look toward 2016. The future looks very bright in Ann Arbor with Harbaugh calling the shots. After totaling 12 wins combined in 2013 and 2014, Harbaugh led the Wolverines to an impressive 10-3 mark this season, including winning five of their last six games. Rudock will be lost to graduation, but the Wolverines have a bevy of talented quarterbacks to choose from next year, including Houston transfer John O'Korn. The defense will need to replace several key members up front, but Jabrill Peppers and Jourdan Lewis will anchor what should be one of the top secondary units in the Big Ten next year.