Holiday Bowl: Defense shines as Badgers hold off No. 25 USC 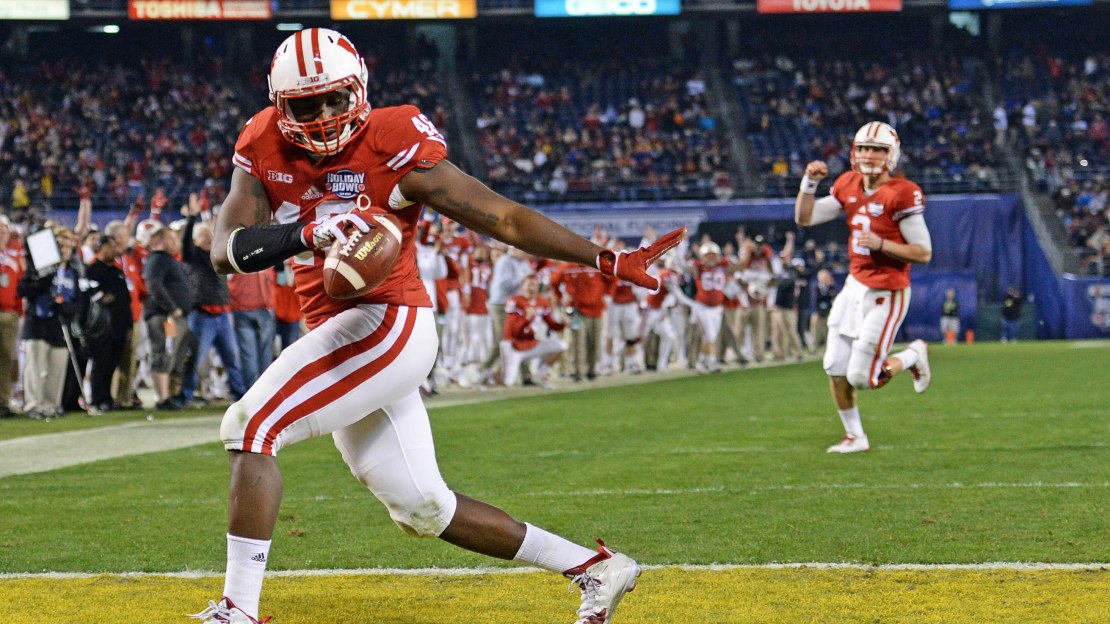 Two of the top programs in America met in what could have been a Rose Bowl clash. These schools last played in 1966, so it was fun to see them renew acquaintances. USC beat the Badgers in Rose Bowl in 1953 and 1963. Both teams had higher aspirations, but this still was a fun game that came down to the final seconds.

Wisconsin came close to taking the Big Ten West, winning nine games but falling short. The Trojans won the Pac-12 South but lost the league title game to Stanford under Clay Helton, who was named coach after Steve Sarkisian was fired during the season.

This was Wisconsin's 14th bowl in a row, the longest postseason run in the Big Ten.

BEST OF THE HOLIDAY BOWL

Best play: Trailing 23-21 late in the game, USC QB Cody Kessler dropped to pass on first-and-10 from the Trojan 37. Kessler was hit by Badger LB Jack Cichy as he threw, and Kessler's pass was picked off by Wisconsin DB Sojourn Shelton. It was the lone turnover in the game.

Best player: Let's give this to Badger QB Joel Stave, who hit 18-of-27 passes for 217 yards and a TD. This was his 31st win as Badger QB, setting a school record. He showed lots of toughness and guts, leaving the game at one point in the fourth quarter after taking a shoe to the nose that caused a cut.

Best moment: In the third quarter, Wisconsin LB Jack Cichy was a one-man wrecking crew. He didn't play in the first half, forced to sit out after being flagged for targeting in the previous game. Cichy played with a pent-up fury, notching nine tackles and three sacks (all on consecutive plays). And his pressure on another play forced a USC interception.

Wisconsin's Jack Cichy entered tonight with 2 career sacks... Then he got 3 in a row on one drive.https://t.co/ITO8GdOsmM

Best stat: 286, yards for USC. And only 65 of those came on the ground. It was the type of suffocating performance we had come to expect from the Badger defense.

Offense: A. The attack was efficient, showing good balance with 217 yards passing and 177 rushing for 394 total. Not bad for a unit that started four redshirt freshmen linemen.

This catch was straight ??? https://t.co/07crLAMyZL

Defense: A. The Badger defense lived up to its billing, as it entered the game No. 1 in the nation in scoring defense (13.1 ppg). Wisconsin  played well in the first half, limiting USC to 24 plays, the fewest for the Trojans in a first half since 2012. And this is a Trojan offense loaded with speed and skill. SC finished with a paltry 286 yards of offense and few big plays. Coordinator Dave Aranda is one of the best in the business.

Special teams: A. Big-time work here. Wisconsin didn't allow the speedy Trojans to rip off any killer returns. And Wisconsin kicker Rafael Gaglianone nailed three field goals, including a game-winning 29-yarder in the final minutes of the contest that were the winning points.

It was over when … Trailing 21-20, Wisconsin marched 42 yards on seven plays, setting up Rafael Gaglianone for a 29-yard field goal with 2:27 left in the game. It was his third field goal of the night. On USC's next possession, Sojourn Shelton picked off a Cody Kessler pass. It was the first and only turnover of the game for either team.

A look toward 2016: Paul Chryst may be Wisconsin's third coach in four years, but this is still a stable program. There is a good foundation for success moving forward. The most work to do is on offense, but that happens to be Chryst's specialty. A new QB must be found and the line needs to develop, but the return of RB Corey Clement will be a nice building block.