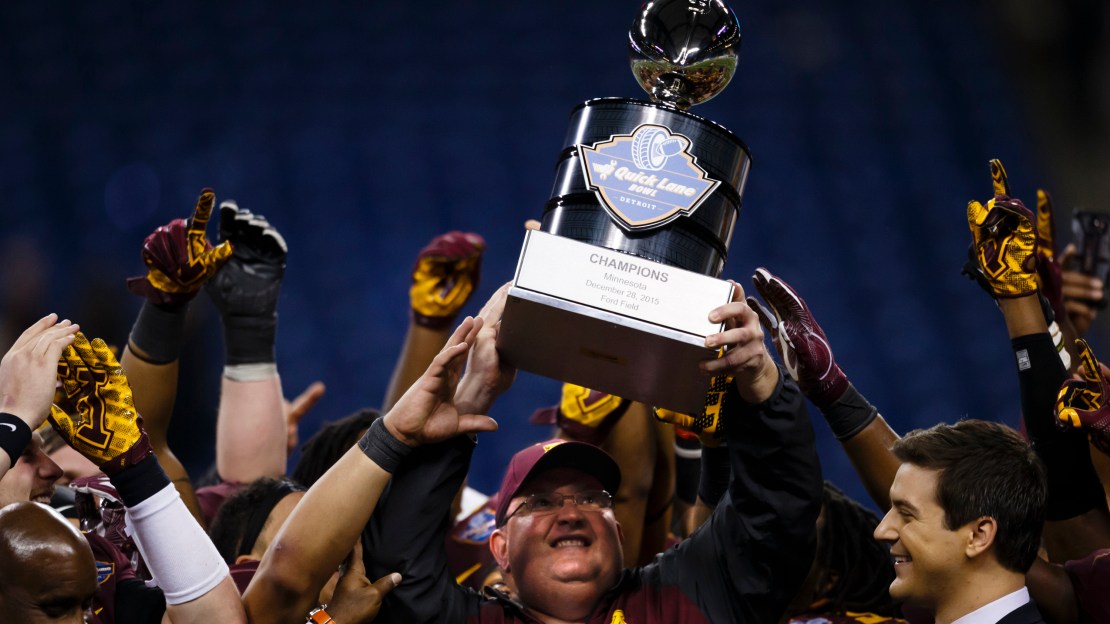 Minnesota had lost seven bowls in a row, which tied Ball State for the longest active postseason losing skein.

That drought is over with a methodical 21-14 win over Central Michigan. The last Gopher bowl victory was authored by BTN's Glen Mason, whose 2004 squad beat Alabama in the Music City Bowl.

Minnesota was one of three 5-7 teams in bowls. And, believe it or not, all three won their games.

Best play: This one came complements of CMU freshman back Romello Ross, who ran 19 times for 100 yards. On a 13-yard TD run in the fourth quarter, he carried myriad defenders into the end zone in what looked like a rugby scrum.

Romello Ross would NOT go down on this run into the endzone. #QuickLaneBowl https://t.co/NH6s4wIhWU

Best player: Minnesota QB Mitch Leidner came up big. He completed 24-of-30 passes for 223 yards with a TD and pick and also ran nine times for 19 yards and a TD. Leidner delivered time and again on the game-winning drive, hitting a big pass on third down to keep the drive going before scoring the go-ahead TD then making a nice throw under duress on the two-point conversion. His 80 percent completion percentage was the best of the season.

Best moment: It was great to see Jerry Kill on the sideline enjoying the victory for a program that he has set in motion for continued success by laying a good foundation. And, he even is growing a beard. Impressive.

Great to have Coach Kill on the sidelines at today's @quicklanebowl! pic.twitter.com/Kr0inI2LLW

Best stat: 249, yards for CMU. The Chippewas were averaging 414 yards.

Offense: B. It did just enough to win, notching 381 yards. Balance was key, as the Gophers had 223 yards passing and 158 yards rushing. Rodney Smith (74 yards) and Shannon Brooks (65) fueled the ground game, while Mitch Leidner had one of his best games of the season.

Defense: A. This unit played championship-caliber football, limiting an explosive CMU attack to 249 yards for an offense that was averaging 414 yards. The Chippewas were averaging 313 yards passing (15th in the nation) behind Cooper Rush, who had just 145 and hit 15-of-29 passes. A boffo Minnesota secondary clamped down on the high-power CMU aerial game. However, freshman CMU back Romello Ross was a force. But, it wasn't enough.

Special teams: A. The Gophers got field goals of 42 and 22 yards from Ryan Santoso. The return game wasn't a factor.

It was over when: After Central Michigan took a 14-13 lead with 11:08 to go on the aforementioned Ross scoring run, Minnesota answered with a grinding 13-play, 74-yard TD drive that ate up 6:42. Mitch Leidner bulled in from 13 yards and then hit a big two-point conversion pass to give the Gophers a 21-14 edge with 4:26 left. The defense did the rest, as Briean Boddy-Calhoun iced things with a pick.

A look toward 2016: Tracy Claeys will try to get the program back on a winning track after enduring a trying 2015 season that was marked by myriad injuries and the surprising retirement of Kill. Claeys will have plenty of talent to work with and a massaged staff that will feature a new offensive coordinator. Bottom line: Don't be shocked if Minnesota makes a push for the West crown after being one of the Big Ten's biggest disappointments this season.

Up next: @BadgerFootball vs. USC. pic.twitter.com/EyjomBArmL