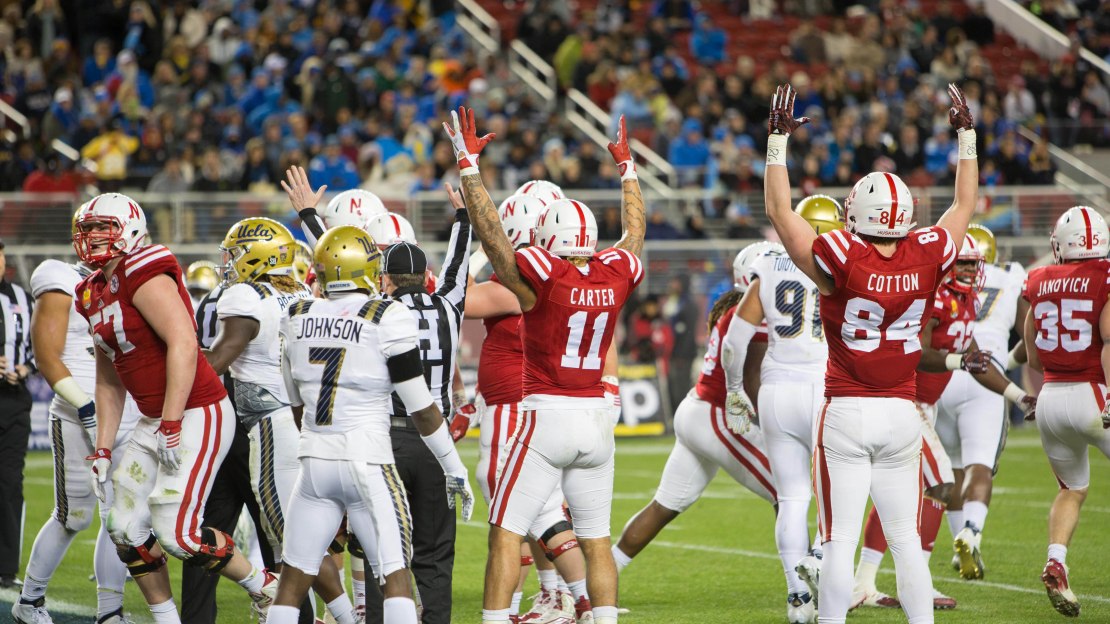 Nebraska was one of three teams in the postseason with a 5-7 record. UCLA also arrived in the Foster Farm's Bowl slumping, losing two of its last three after looking like a contender in the Pac-12 South.

But it was the Huskers who got to end 2015 on an up note, scoring 30 consecutive points after trailing 21-7. The victory still didn't give Nebraska a winning mark, as it finished with a 6-7 record–its first losing mark since 2007. The win also gives the program some much-needed good vibrations after what has been a challenging debut for Mike Riley that featured myriad close losses.

Best play: Early in the third quarter, Nebraska WR Stanley Morgan, Jr., made a spectacular one-handed 22-yard TD catch from a perfectly delivered pass from Tommy Armstrong. The TD gave the Cornhuskers a 27-21 lead after they trailed 21-7.

What a catch by Stanley Morgan Jr for the TD! Nebraska is not messing around. #SCtop10 https://t.co/o9ZqPSkj6u

Best player: Nebraska QB Tommy Armstrong played a strong game, hitting 12-of-19 passes for 174 yards with a TD and no picks. He also ran 10 times for 76 yards and a score. Yes, he lost a fumble deep in UCLA territory early in the game. But time and again, Armstrong made good decisions–and big plays.

Best moment: The smile of relief on the face of Mike Riley, who endured one of the toughest seasons of any coach and avoid the school's first eight-loss season since a nine-loss effort in 1957.

Best stat: 326, yards rushing for Nebraska on 62 rushes, averaging 5.3 yards per tote with nine players getting carries. It was a season-high rushing total. As a point of reference, UCLA ran just 16 times for 67 yards.

Offense: A. The Nebraska offense used its considerable size advantage to mash a UCLA defense that was beat-up and undersized. The Huskers pounded at the Bruins with an array of backs. Imani Cross, Devine Ozigbo, Terrell Newby, Andy Janovich and QB Tommy Armstrong sliced through UCLA. The Huskers finished with 326 yards rushing and 500 total yards in one of their best performances of the season.

Defense: B+. Things didn't start well, as UCLA built a 21-7 lead behind behind the passing of Josh Rosen. But the Husker defense settled down. How good did it get? UCLA had just one yard in the third quarter. Nebraska safety Nate Gerry was ejected in the second quarter for targeting UCLA's Paul Perkins. Still, the often maligned Husker defense played well, allowing just 386 yards, making the Bruins one-dimensional (319 yards passing/67 rushing). And Nebraska generated two turnovers.

This was ruled a targeting penalty. https://t.co/P9OAaSjjP2

Special teams: N/A. These didn't play a big role in the game. NU's Drew Brown nailed his lone field-goal attempt (20 yards) but missed a PAT. The return game wasn't a factor for either team.

It was over when: Nebraska led, 37-29, late in the fourth quarter with UCLA threatening deep in Husker territory. The Bruins needed a TD and two-point conversion to tie. But facing a fourth down, UCLA QB Josh Rosen scrambled and tossed a pass picked off by Chris Jones to kill the Bruins' hopes.

A look toward 2016: It can't be much worse than 2015, right? The Huskers suffered myriad close loses in about every way imaginable. Mike Riley's system will have another year to take root. And plenty of talent remains in Lincoln for the Huskers to be a factor in the Big Ten West. Areas to focus on: The offensive line, secondary and steady QB play.