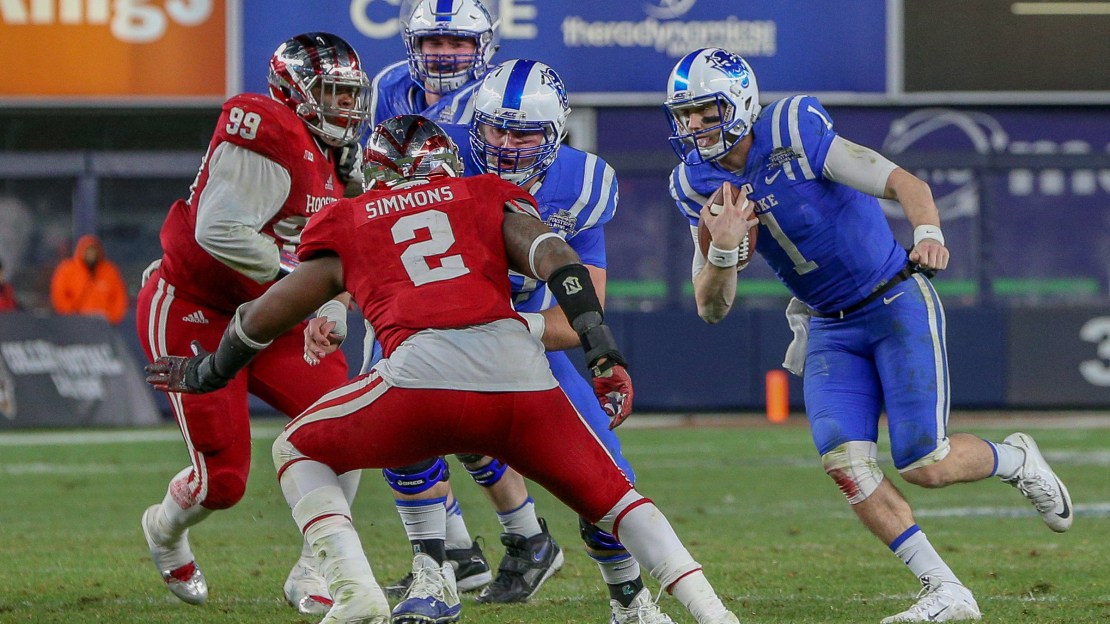 The first Big Ten bowl was a doozie, as Duke took a 44-41 overtime win vs. Indiana in a Pinstripe Bowl that featured eight lead changes.

It was the Blue Devils' first postseason win since a Cotton Bowl triumph after the 1960 season, ending a five-bowl skid. The Hoosiers have now lost three bowls in a row, last winning the Copper Bowl in 1991. Indiana finishes 6-7 and still has not had a winning season since 1994.

Best play: There were some good ones. Let's go with the 98-yard kickoff return for a TD for Duke's Shaun Wilson. IU had just taken a 34-27 lead on a Griffin Oakes field goal before Wilson's run back tied it at 34-34 in the fourth quarter.

Best player: IU RB Devine Redding. Subbing for injured Jordan Howard, Redding ran 35 times for 227 yards and a TD. He had 23 carries for 135 yards at halftime. Redding probably should have been used more in the second half.

Devine Redding has set an #iufb record for bowl game rushing yards. He has 175.

Best moment: It was a tough loss for Indiana, but the joy for Duke was apparent as the players celebrated after watching a potential game-tying IU field goal in the first OT miss–despite one angle showing the kick apparently looking good.

Indiana missed this FG to give Duke its first bowl win since 1961. #PinstripeBowl https://t.co/nmAy8zSZ0Y

Offense: B+. After a scoreless first quarter, IU's attack came to life in the second half to forge a 17-17 tie. The offense finished with 667 yards, notching 389 through the air and 278 on the ground. Those numbers are great, yes, but Nate Sudfeld threw a pair of picks in Duke territory and reliable wide receiver Simmie Cobbs Jr. dropped a would-be touchdown. Indiana finished with three turnovers.

Defense: D-. The unit got gashed for 85- and 73-yard TD runs in the first half. It was the first time since 1951 that Duke had two runs of at least 70 yards in a game. The Blue Devils finished with 536 yards, including a stupefying 373 on the ground as Duke averaged 8.1 yards per tote.

Special teams: D. These played a huge role. IU kicker Griffin Oakes drilled a 45-yard field goal in the dying moments of the first half to make it 17-17. Before that, the Hoosiers snuffed out a fake punt by Duke. But IU got ripped for a 98-yard kickoff return for a TD that tied the game 34-34 early in the fourth quarter. With a chance to win the game in regulation, Oakes missed on a 56-yard bomb when the holder failed to spin the laces opposite the kicker. But most killer: Oakes missed a 38-yarder in overtime after Duke had taken a 44-41 lead with a FG on its OT possession.

It was over when: Oakes missed his field goal in OT. From one angle, the kick looked good. But since the kick was over an upright, it couldn't be reviewed.

A look toward 2016: Indiana took a step forward by making it to its first bowl since the 2007 season. But work remains, especially on the defensive side of the ball. A lack of speed and athletic ability is glaring in the secondary. And overall toughness remains an issue. The offense also must replace QB Nate Sudfeld, but Kevin Wilson has proven adept at developing signal-callers and offenses. IU has a bright future.