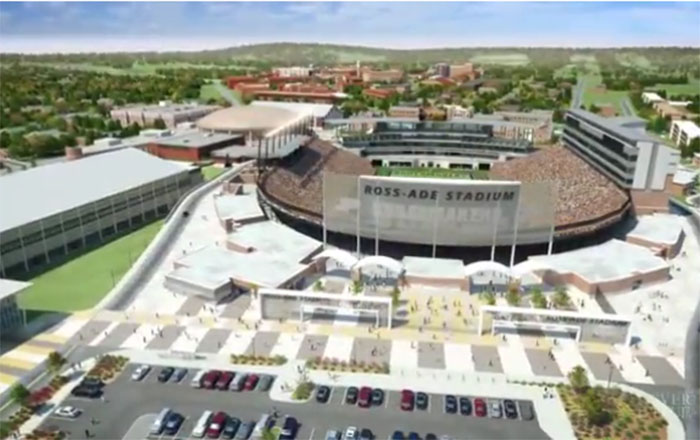 See how we are transforming the future of @BoilerFootball . Go to https://t.co/nQHByrXeRp now! #Boiler... https://t.co/nFkneYdBR1

Good news at Purdue, where the Board of Trustees approved funds for a much-needed football performance complex.

The state-of-the-art football performance complex will significantly enhance the football student-athlete experience. In addition to the first-class amenities, having all of them located in one facility will result in more efficient use of the student-athletes? time. Currently, football-related facilities are housed in multiple buildings.

Never thought I'd look to the Minnesota punter for holiday inspiration. But Peter Mortell sets quite a standard.

Last December, all Minnesota players received a $452 Best Buy gift card for playing Missouri in the Citrus Bowl. Mortell purchased items and donated them to needy kids at St. Joseph's Home for Children in Minneapolis. This year, he started a crowd funding effort to raise $10,000 to buy gifts for teenage patients at the University of Minnesota Masonic Children's Hospital. After 12 hours, contributions exceeded $10,000, and he set a new goal of $25,000. Mortell is also looking for a $25,000 match from a corporation.

Doug Lesmerises of Cleveland.com wonders if 2016 Buckeyes can be like the 2006 Buckeyes, propelled by a Fiesta Bowl win over Notre Dame.

The story about the 2015 Buckeyes has been written, the final chapter against Michigan State, the epilogue against Michigan. What happens in the bowl won't change the theme, that the uber-talented Buckeyes missed this chance. Just like in 2005, the Buckeyes must be at peace with that.

"Things happen for a reason, and for some reason or another, we weren't meant to win that game," A.J. Hawk said after the 2005 season of the Texas game, a phrase that may as well have been uttered by a 2015 Buckeye about Michigan State. "Maybe someone, somewhere wanted to set up this Ohio State-Notre Dame matchup."

Don Brown officially came aboard as Michigan DC on Monday. This is an interesting hire by Jim Harbaugh. Expect intensity and blitzing. Over the years, Brown's schemes and tactics typically revolved around one thing.

"Everything's based off blitzing," Jason Hatchell said who played linebacker for Brown from 2004-07 at UMass. ". "He had so many plays in his head, probably more than we even knew, that he brought to the table every week. The defense was built off of that.

"You show them one look, then another, then something different."

Former players say Brown consistently worked at changing up looks and schemes from week to week. Most were dependent on the opponent, some were brought out to best utilize the strengths of whatever personnel he was working with at any given time. Some were just creative ideas he thought he'd try.

Yes, Denzel Valentine will be out 2-3 weeks with a knee injury. No, it's not a reason to panic. It's not March.

Michigan State plays Oakland tonight, as it looks to break a school record for consecutive wins to start a season. This season's Spartans are tied with the 2000-01 team for the best start in program history at 12-0. From there, the Spartans play at Iowa (Dec. 29) and at Minnesota (Jan. 2) to open Big Ten play. Valentine is likely to miss both of those games. The best case scenario would be for him to return the following week, when the Spartans play Illinois at home and at Penn State. Junior guard Eron Harris will take Valentine's spot in the starting lineup, Tom Izzo said. I have a feeling MSU will be just fine.

With a new coach in Chris Ash at Rutgers comes a new offensive philosophy. Ash wants to run a spread-based attack similar to the one at Ohio State. So, a mobile QB probably is required. Is incumbent Chris Laviano the guy? He is mobile, but not uber mobile. Backup Hayden Rettig is much less mobile.

"The offense can adjust based on the quarterback," Ash said. "It's not going to be locked in that we have to have a running quarterback and this all we're going to do, because what if the backup is a thrower and a guy gets hurt? We better be able to adjust or we're not going to be able to move the ball and score points. And vice versa, if the starter is a thrower and we're doing a certain style of offense and certain plays and the backup is a runner and the starter gets hurt, we have to have an offense that's flexible to utilize that skill set."

Sam McKewon of Omaha.com says he has the cure to limit the close calls that ailed Nebraska in 2015: A talent boost. Yep. Sounds about right. Good talent cures all.

McKewon say while talent is not the primary reason Nebraska lost to Purdue and Illinois - or frankly the reason it beat Michigan State - the gap between NU and the rest of the Big Ten West isn?t significant enough. It is less significant than the gap you may see between UCLA and Nebraska in Saturday?s Foster Farms Bowl.

Good video here from Jason Galloway of Madison.com who says 10 wins would mean a lot to this Wisconsin squad, considering the injuries the team has had to deal with this season. Of course, getting win No. 10 would mean beating a very good USC team that played in the Pac-12 title game. Can't wait to watch that Trojan o-line battle a very good Badger front seven.