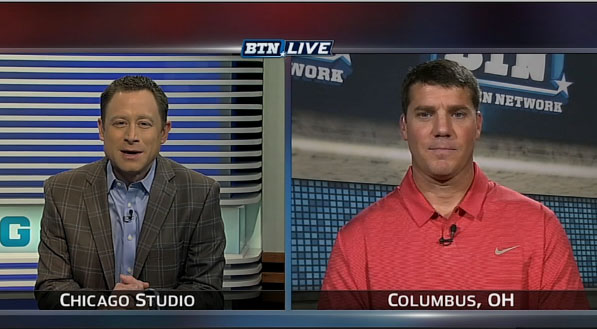 Remember when many people groused about the 10-year, $35 million contract that Iowa signed Kirk Ferentz to in 2009? Well, Jon Miller of HawkCentral says it may have been the best thing for the school. A lesser deal, and Ferentz may have been ousted a few years ago, which means this 2015 season of glory may never have happened.

I am intrigued and maybe even a bit excited about the Foster Farms Bowl between Nebraska and UCLA. It should be a nice test for the Husker LBs-and a chance for NU to end the year on a much-needed high note.

?It?s going to be important we?re all ready to go,? said Michael Rose-Ivey. ?It goes to our strength. We?ve got some quality guys in there who can step up when guys get tired or we need a certain look, a certain package, out there. That?s just a versatility our linebacker corps can bring out there.?

Cool video here of RU WR Leonte Carroo showing you his ?Man Hands.? This guy is such a stud.

More video here: A good break down of the athletic ability of Penn State RB Saquon Barkley. This guy is on course to be one of the top backs in school history.

NFL draft guru Todd McShay says scouts have concerns about Connor Cook?s character. How many times will we hear this storyline the next six months?

"The one thing we have is that this guy, with all the statistics, with all the great things he's done and playing that position, was not named a captain, so it kind of started there" McShay said on a teleconference this week. "And there's been a lot of talk from NFL scouts about some of those concerns."

Just know this: If you can play, the NFL will draft you. Talent matters. The NFL proves this every year.

USAToday is out with its ?cost of wins? graphic. And, as you can see, wins were VERY expensive at Purdue last year. How expensive? It's $2.1 mil for each of the two victories. That?s what they call ?bad return on your investment.?

Northwestern vs. Illinois in the United Center next year? It may happen, according to this report.

The Chicago Tribune?s Teddy Greenstein says that Northwestern and Illinois are looking to play a double-header at the United Center next December with the Wildcats taking on Dayton and the Illini playing BYU.

Well, Bo Ryan got his wish: His long-time aide Greg Gard will coach Wisconsin on an interim bases for the rest of the season.

"It's been a whirlwind, an avalanche, a hurricane all in one," Gard, 45, said during a news conference Wednesday afternoon. "But it's been unbelievably positive. I've enjoyed every minute of it. I get more and more excited as the minutes go on."

Gard, who served under Ryan at UW-Platteville, UW-Milwaukee and for the last 14-plus seasons. Consider this an audition for the job. If the Badgers fail to make the Big Dance, he probably won?t get to keep the job. And, it looks like he has a tough task with a UW team that is 7-5.

Steve Greenberg of Bleacherreport.com blows one last kiss as Ryan rides off into the hoops sunset.