Dienhart: Here's a look back at Indiana's 2015 season 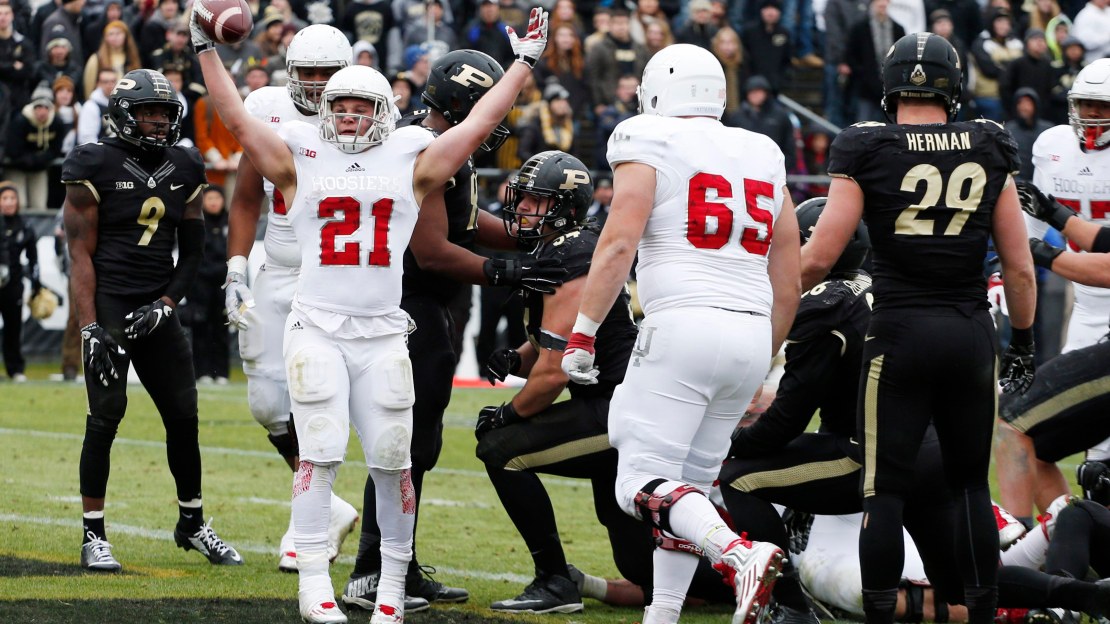 After eight years, the wait is over for Indiana. Finally, the Hoosiers are going to a bowl game.

The last time it happened was 2007, when Bill Lynch was the coach. In fact, this is just the second time since 1993 that Indiana is in a bowl. Now, Kevin Wilson has the Hoosiers in the postseason in his fifth season on the job. And his team did it with an offense that was noteworthy for being physical.

Guard Dan Feeney and tackle Jason Spriggs are maulers with pro futures who cut a wide swath for RB Jordan Howard. With the ground game humming, QB Nate Sudfeld was able to do his magic in the passing game. The defense? Well, it still is sub-par. IU was last in the Big Ten in scoring defense (37.1 ppg); last in total defense (507.3 ypg); No. 12 in rushing defense (180.9 ypg); last in pass defense (326.3 ypg). Regardless, an attack that led the Big Ten in scoring (36.2 ppg) and total offense (490.8 ypg) smoothed over the rough spots in a memorable season.

High point: Indiana came out of the gate hot, starting 4-0. But let?s go with the season-ending victory at Purdue that clinched the Hoosiers? first bowl since 2007. IU had its back against the wall the last two weeks, needing to win games at Maryland and at Purdue to finish 6-6 and guarantee bowl eligibility. The Hoosiers delivered 47-28 and 54-36 victories, respectively. The win vs. the Boilermakers was IU?s third in a row vs. Purdue, giving Indiana its first three-game winning streak vs. the Boilers since the 1940s. Nothing sweeter than icing a bowl trip on your rival?s turf. The Hoosiers have their foot on the Boilermakers? neck.

Low point: That promising 4-0 start was followed by numbing six-game losing skid that threatened to derail the season. The biggest gut punch came in a 55-52 home loss to Rutgers in which the Hoosiers blew a 25-point lead, squandering a 52-27 advantage with 5:25 left in the third quarter. The final Scarlet Knight points came on a game-winning field goal as time expired, leaving IU stupefied. The last loss in the six-game slump was also painful, as Indiana lost at home in double overtime to No. 14 Michigan. IU was poised to keep pace when wideout Mitchell Paige dropped a potential game-tying pass on fourth-and-goal from the 2-yard line.

Offensive MVP: RB Jordan Howard. He arrived in Bloomington amid big hype as a transfer from UAB, which had dropped its program. Howard delivered as an able replacement for Tevin Coleman, earning consensus first-team All-Big Ten honors after running for 1,213 yards and averaging 134.6 yards per game which ranked behind only Ezekiel Elliott?s 139.3 average. Had Howard not missed three games with injury, the junior may have had the most rushing yards in the Big Ten.

Defensive MVP: DE Nick Mangieri. Stats don?t measure his true value, as Mangieri was a leader for a unit that continues to experience growing pains. The senior notched 48 tackles and a team-high 11 TFLs and nine sacks.