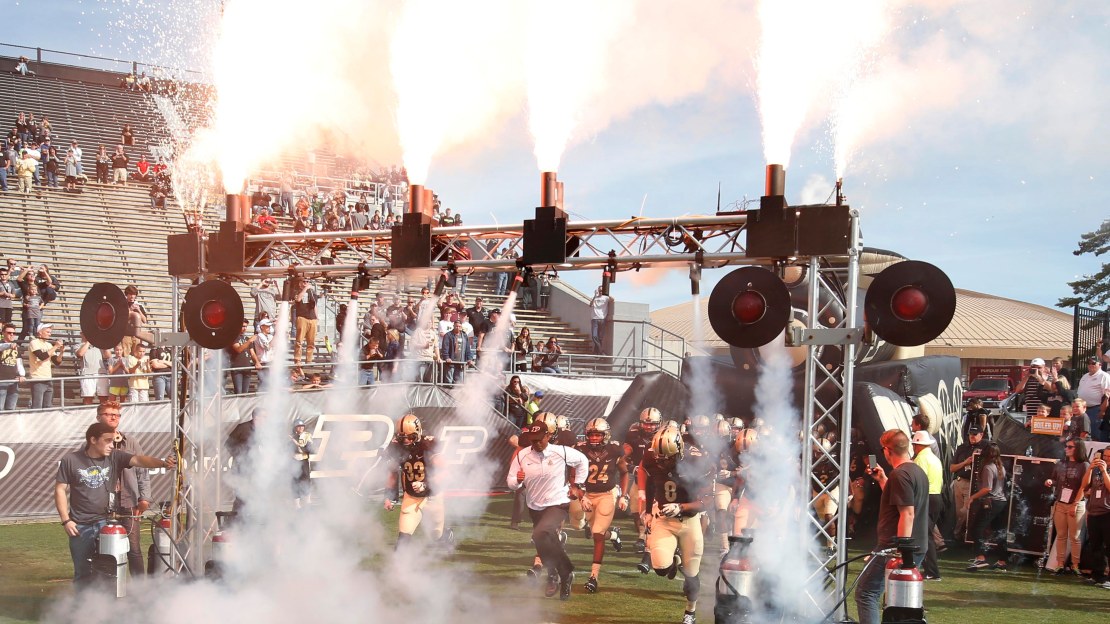 While staffs at Penn State and Ohio State have filled openings, Purdue still has yawning holes at offensive and defensive coordinator. But, it sounds like Darrell Hazell has a timeline for these oh-so-critical hires that probably will make or break his tenure. No pressure.

Hey-yo! Rutgers has a new offensive coordinator/QB coach. His name: Drew Mehringer. Who is this guy? Dan Duggan of NJ.com has the low-down.

Mehringer and RU coach Chris Ash never have worked together. But each has worked with Houston coach Tom Herman. In fact, Mehringer was WR coach at Houston last year.

The Rose Bowl Trophy recently was at a Coralville, Iowa, bar near the Iowa campus. And Iowa fans flocked to see the hardware. That?s why I love Hawkeye fans. They care and have passion.

Brendan F. Quinn of Mlive.com has a read on ?buy games? in college hoops from the perspective of tiny Delaware State, which recently was a sacrificial lamb for Michigan. The school got $90K for donating its blood.

"When you're talking about those numbers, it's a case of the haves and the have-nots," Delaware State coach Keith Walker said. "This is the only way we can sustain our athletic department."

Michigan State rolls on as American?s No. 1 team despite not having big man Gavin Schilling, who is likely out until after Christmas after suffering a toe injury.

Schilling started 33 games for Michigan State last year, and averaged 5.1 points. Forwards Matt Costello and Deyonta Davis have been the Spartans' primary options in his absence. It?s nice to have depth, huh?

The Heisman ceremony was this past Saturday. And David Jones of Pennlive.com apparently wasn?t impressed by Alabama?s Derrick Henry, who won the award. In fact, Henry didn?t even make Jones? ballot.

Stanford?s Christian McCaffrey was No. 1 on Jones? ballot. Me? I was impressed by Henry and had him No. 1. I had McCaffrey No. 2 and Clemson?s Deshaun Watson No. 3. But, I admit, Jones does make some good arguments.

You say you?ve never heard of new Penn State OC Joe Moorhead? No worries. At least that is what Frank Bodani of the York Daily Record thinks. In fact, he calls Moorhead a ?home run? hire. Here is what to expect from Moorhead.

Look for lots of shotgun and play alterations at the line of scrimmage.

It?s an epidemic you may not have heard about: colleges paying coaches not to coach. Some people call it a waste. Me? I call it the cost of doing business in today?s market place.

Severance pay is the top-rising expense for athletic departments at some of America?s largest public universities, according to a Washington Post review of thousands of pages of financial records from schools in the five wealthiest conferences in college sports. In a decade, the total annual amount spent on severance by athletic departments at 48 public universities in the ?Power Five? conferences increased from $12.9 million combined in 2004, adjusted for inflation, to $28.5 million in 2014. That 120 percent jump outpaced rises on larger athletic budget items such as facilities spending (89 percent), coaches pay (85 percent) and administrative-staff pay (69 percent).

Sam McKewon of Omaha.com takes a deep dive into stats that show what the Huskers need to work on.

One conclusion: The Husker defense must improve. The unit allowed 5.82 yards per play. The four teams that made the playoffs allowed a combined 4.71 ypp. See? McKewon points out that over 70 plays in a game, that?s a 77-yard difference. A full touchdown drive. Tough to be a touchdown underdog on defense, huh?