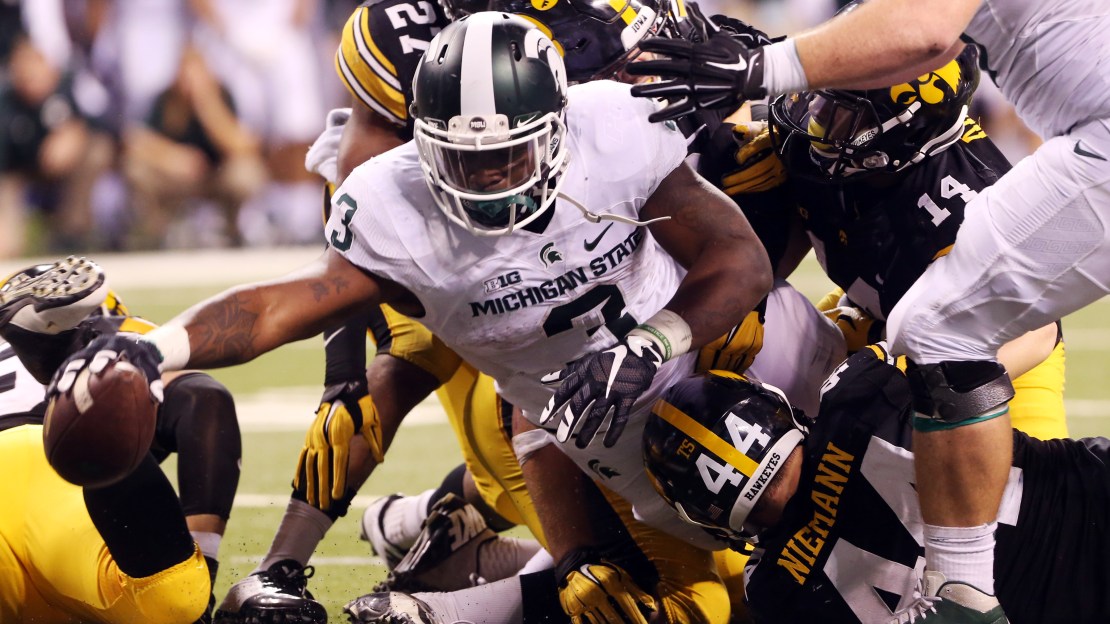 The 2015 Big Ten football season is in the books. With Michigan State defeating Iowa in the conference championship game just six days ago, Big Ten fans will have to wait another two-plus weeks for bowl games to get underway.

In the meantime, we couldn't help but to look ahead to next season.

BTN.com writers Tom Dienhart and Sean Merriman got together to debate the following question: Who is the early pick to win the Big Ten next year?

Who is your way-too-early pick to win the Big Ten next season?

Dienhart: Stop me if you?ve heard this before: My pick is Ohio State. I know. Not very sexy or provocative. But, the Buckeyes still have the most talent in the Big Ten. Michigan State won this year?s crown and could repeat. But losing Connor Cook figures to be a huge blow. Ezekiel Elliott already has said he is leaving, but OSU will have J.T. Barrett back under center. He is capable and experienced. The o-line will need three new starters, but there is plenty of skill talent back led by Jalin Marshall, Curtis Samuel and possibly Michael Thomas at wideout. There is no running back as dynamic as Elliott, but the options are plentiful. The defense figures to lose end Joey Bosa. The line also will lose Adolphus Washington inside. But watch end Sam Hubbard become the next star up front. The linebacking corps will be anchored by Raekwon McMillan. And if Darron Lee returns, look out. Want more? A talented secondary didn?t start a senior. Bottom line: 2016 sets up as a big season-again-in Columbus. How big? It will depend on how many players turn pro. Even then, the Buckeyes have plenty of talent to step in. Urban Meyer?s program continues to roll.

Merriman: I think the 2016 Big Ten season will be wide open. In fact, call me a sellout, but I'm going to point out three teams that could win the conference next season. First, I have to agree with you that Ohio State has a good chance at taking home the Big Ten title. J.T. Barrett will be the most talented quarterback in the conference next season, and with a number of young weapons surrounding him — Jalin Marshall, Curtis Samuel, Dontre Wilson, Mike Weber — this offense should put up big numbers again in 2016. Raekwon McMillan could be the best linebacker in the nation next season, and even with Joey Bosa, Vonn Bell and Darron Lee likely bolting early for the NFL, I still think this defense will be outstanding. I also like the Michigan State Spartans in 2016. Look, the Spartans beat Ohio State this season, in Columbus, with projected starter(s) Tyler O'Connor and Damion Terry at quarterback. MSU returns an abundance of talent in the backfield, including Big Ten title game star, LJ Scott. On defense, Mark Dantonio's club must find a way to replace a pair of exceptional pass rushers in Shilique Calhoun and Lawrence Thomas, but Malik McDowell should be a preseason All-American, and Ed Davis, who was lost this year to a season-ending injury, is excepted to be back for a sixth year of eligibility. Those two will join the likes of Riley Bullough, Vayante Copeland and Jon Reschke to form one of the top defenses in the country next season. My third and final pick is Iowa. Look what the Hawkeyes did this season with C.J. Beathard under center, LeShun Daniels running the ball, and Josey Jewell leading the defense. Well, guess what? All three key players will be back next season for a team that finished with a perfect 12-0 regular season record this year. If Desmond King decides to return for this senior season, this Hawkeyes team will be special.