Player Rankings: A.J. Hammons plays his way back onto list 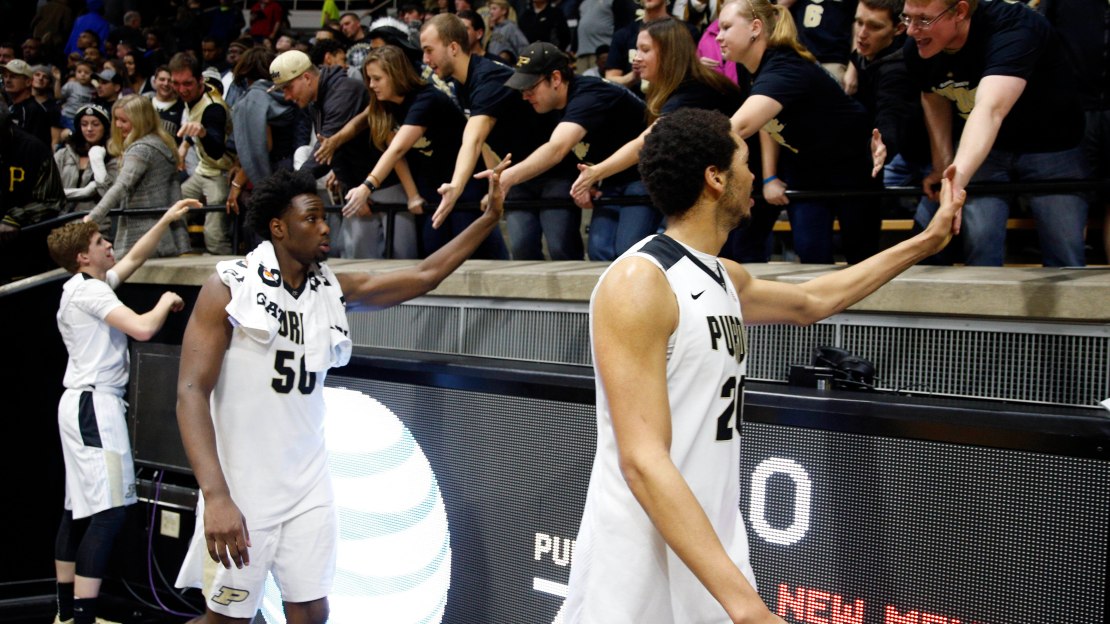 1. Denzel Valentine, Michigan State. Louisville challenged Valentine at both ends of the court, but down the stretch Valentine made the big plays and finished with 25 points, five rebounds, and seven assists in an impactful Spartan win.
Last week: 1

2. Melo Trimble, Maryland. Trimble is unstoppable in high ball screen situations, and his shootout with North Carolina star Marcus Paige in the Big Ten/ACC Challenge headliner was worth the price of admission. Trimble finished with 23 points and an impressive 12 assists.
Last week: 2

3. Caris LeVert, Michigan. Michigan is on a four-game winning streak, and LeVert is the biggest reason why. He scored 18 points in a win at N.C. State and then lit up the nets against Houston Baptist with an easy 25 points. With the emergence of Duncan Robinson, coupled with the shooting ability of the Michigan guards, LeVert is making extended defenses pay.
Last week: 3

4. Nigel Hayes, Wisconsin. Hayes is fresh off a pair of double-doubles, including a 15-point, 12-rebound effort in a resume-building win at then-No. 14 Syracuse in the Big Ten/ACC Challenge. The star junior came up clutch, too, converting an old fashioned three-point play to break a tie in overtime.
Last week: 4

5. Jarrod Uthoff, Iowa. You name it, Uthoff is doing it. In Monday night's rout of Western Illinois, he poured in a career-high 27 points, on 10-of-16 from the field, and grabbed nine rebounds. In the three previous games, Uthoff was averaging a silly 4.7 blocks.
Last week: 5

6. A.J. Hammons, Purdue. After an early season suspension, Hammons is back on track. The Big Ten Player of the Week averaged 20 points, 11.5 rebounds and 1.5 blocks to keep the Boilers undefeated, and he opened this week by hitting all six of his shots in Monday night's win over IUPUI.
Last week: NR

7. Yogi Ferrell, Indiana. The Indiana defense continues to struggle, but anytime Ferrell has the ball he is a threat to make a big play. Here's an interesting stat: Ferrell is shooting 55 percent and averaging 16.7 points in Indiana's six wins, compared to 36 percent and 11.7 points in its three losses.
Last week: 6

8. Robert Carter Jr., Maryland. The Georgia Tech transfer continues to thrive in his new surrounding. In his first eight games with the Terrapins, Carter Jr. is averaging 13.6 points, scoring in double figures every game, 6.6 rebounds and 2.1 assists, while shooting a head-turning 63 percent.
Last week: 7

9. Malcolm Hill, Illinois. Hill played well against Notre Dame, but his 19-point, three-assist performance wasn't enough to overcome the sharp-shooting Fighting Irish. Now that fellow junior Kendrick Nunn is in game shape, look for Illinois to make a move over the next few weeks.
Last week: 8

10. Isaac Haas, Purdue. Haas is one of the Big Ten's most improved and intimidating players, and a major reason why the Boilers are undefeated. The sophomore is averaging 14.1 points, 5.4 rebounds and two blocks in only 17.9 minutes a game.
Last week: NR