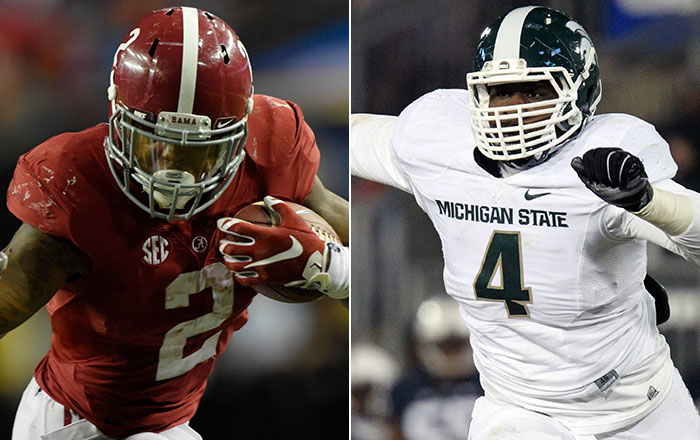 Deep breath, people ? from Shreveport to Hawaii, a ranking of all 40-yes, FORTY!–bowl games.

Hey, the holidays are all about excess in America. So, why not an overload of bowl games as we reminisce about the Poulan Weedeater Bowl? Perfect.

1. Goodyear Cotton Bowl (Dec. 31). Alabama vs. Michigan State. Who has the more wicked glare? Saban or Dantonio? This one is all about toughness.

2. Capital One Orange Bowl (Dec. 31). Clemson vs. Oklahoma. You won?t find a better QB matchup than the Tigers? Deshaun Watson vs. the Sooners? Baker Mayfield.

3. Battlefrog Fiesta Bowl (Jan. 1). Ohio State vs. Notre Dame. Two iconic programs square off in a game that has the look and feel of a playoff contest.

5. Rose Bowl (Jan. 1). Stanford vs. Iowa. Two tough, physical teams meet for the first time. The Hawkeyes last were in Pasadena in the 1990 season.

6. Russell Athletic Bowl (Dec. 29). North Carolina vs. Baylor. This could be the best non-New Year?s Day bowl of them all between pyrotechnic offenses. Don?t miss it.

7. Allstate Sugar Bowl (Jan. 1). Ole Miss vs. Oklahoma State. These clubs also met in the 2010 Cotton Bowl. The offenses are fun. Watch the WR battle between the Rebels? Laquon Treadwell and the Pokes? James Washington.

8. Chik-Fil-A Peach Bowl (Dec. 31). Houston vs. Florida State. This is a gem between teams that are a combined 22-3. Makes you wish we had a deeper playoff pool.

10. Boca Raton Bowl (Dec. 22). Temple vs. Toledo. An under-the-radar gem between two of the nation?s top non-Power Five teams. They both deserved a better bowl.

14. Outback Bowl (Jan. 1). Northwestern vs. Tennessee. A battle between two rising programs. NU beat an SEC team in its last bowl. Can it make it two in a row?

16. Birmingham Bowl (Dec. 30). Memphis vs. Auburn. Remember when Auburn was picked to win the SEC? Memories. Now, they must fend off pesky Memphis.

18. Motel 6 Cactus Bowl (Jan. 2.). Arizona State vs. West Virginia. Two inconsistent teams with fun offenses and daring coaches square off in a contest that could be entertaining.

19. AutoZone Liberty Bowl (Jan. 2). Kansas State vs. Arkansas. Bret Bielema once coached for Bill Snyder. Bombastic vs. stoic. This could be fun.

23. Foster Farms Bowl (Dec. 26). UCLA vs. Nebraska. Will Bruin freshman sensation QB Josh Rosen carve up a Husker secondary that has been carved up often?

25. TaxSlayer Bowl (Jan. 2). Georgia vs. Penn State. Too bad it isn?t 1982, when these teams met in the Sugar Bowl for the national title. The Bulldogs have lost their coach, while the Nittany Lions are a work-in-progress.

26. Hawaii Bowl (Dec. 24). San Diego State vs. Cincinnati. This is a solid Aztec squad that won 10 games and the Mountain West title.

30. Zaxby?s Heart of Dallas Bowl (Dec. 26). Washington vs. Southern Miss. Prediction: Chris Petersen didn't leave Boise State to play in a bowl like this, one vs. a non-Power 5 team.

33. New Era Pinstripe Bowl (Dec. 26). Indiana vs. Duke. Insert your basketball comment here. Are you done? Good. This could be a fun, offensive show in the Big Apple.

34. Quick Lane Bowl (Dec. 28). Central Michigan vs. Minnesota. Back in August, the Gophers had visions of a Big Ten West title. Now, they are 5-7 and in Detroit still looking for offensive consistency.

35. Popeye?s Bahamas Bowl (Dec. 24). Middle Tennessee vs. Western Michigan. The big winner here? Both teams, who get to play in the Bahamas. Sure beats a trip to, say, Shreveport, Louisiana.

36. Famous Idaho Potato Bowl (Dec. 22). Akron vs. Utah State. Can the hot Zips led by Terry Bowden close on a high note vs. the slumping Aggies?

37. Camping World Independence Bowl (Dec. 26). Tulsa vs. Virginia Tech. This can?t be how Frank Beamer envisioned going out. In Shreveport in a battle of 6-6 teams? Really?

39. Arizona Bowl (Dec. 29). Colorado State vs. Nevada. Both of these teams are in the Mountain West. Honest. And they are playing in a bowl vs. each other. The good news: They didn?t play in the regular season.

40. AutoNation Cure Bowl (Dec. 19). Georgia State vs. San Jose State. Finally, and fittingly last, a clash between squads that are a combined 11-13. If you watch this game, I salute you.