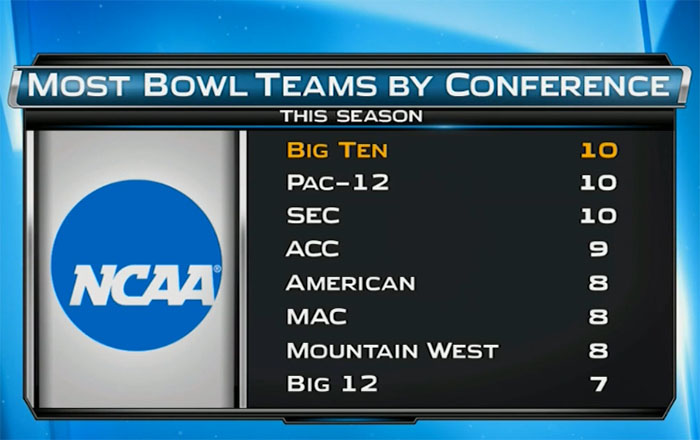 A conference record-tying 10 Big Ten teams will play in bowl games this postseason, it was announced Sunday afternoon.

Find out more about each Big Ten bowl matchup below:

#iufb is heading to the @PinstripeBowl! Pack your bags for the Big Apple ??


The 17th-ranked University of Michigan football team will be heading to Florida over the holiday season, squaring off against the 19th-ranked Florida Gators in the 2016 Buffalo Wild Wings Citrus Bowl on Friday, Jan. 1, 2016. This will be the Wolverines fifth appearance in the Citrus Bowl. Read full MGoBlue.com release.

Michigan will face Florida in the @BWWCitrusBowl on Jan. 1! #GoBlue pic.twitter.com/EPDnycV9qs

We are heading back to the @CottonBowlGame! Spartans and Crimson Tide will meet on New Year's Eve on ESPN. pic.twitter.com/fUBFrxUph4


The University of Minnesota has accepted an invitation to play Central Michigan in the 2015 Quick Lane Bowl on Dec. 28. The game will be played at Ford Field and is scheduled for a 4 p.m. CT kickoff and will be televised by ESPN2. Read the full GopherSports.com release.

The #Gophers are going bowling! Minnesota will take on Central Michigan in the @QuickLaneBowl in Detroit. pic.twitter.com/hGTWfJUVJr


The University of Nebraska has been selected to participate in the 14th Foster Farms Bowl at Levi?s Stadium in Santa Clara, Calif. The Huskers will take on the UCLA Bruins of the Pac-12 Conference on Saturday, Dec. 26 with kickoff at 9:15 p.m. ET. Read full Huskers.com release.

#Huskers have accepted an invitation to the @FosterFarmsBowl to face UCLA.


Northwestern has accepted an invitation to the 2016 Outback Bowl in Tampa, Florida. The Wildcats will match up against No. 23 Tennessee of the Southeastern Conference at noon ET on Friday, Jan. 1, at Raymond James Stadium, home of the NFL's Tampa Bay Buccaneers. Read full NUSports.com release.


The 11-1 Ohio State Buckeyes will meet the 10-2 Notre Dame Fighting Irish in the BattleFrog Fiesta Bowl Jan. 1 at the University of Phoenix Stadium in in Glendale, Ariz. Kickoff is set for 1 p.m. ET. Read full OhioStateBuckeyes.com release.


Penn State returns to a Florida bowl for the first time since the 2010 season when the Nittany Lions take on Southeastern Conference foe Georgia in the 71st annual TaxSlayer Bowl on Saturday, January 2 at noon. Read full GoPSUSports.com release.


The Wisconsin football team will make its first appearance in the Holiday Bowl after accepting an invitation Sunday afternoon to face USC on Dec. 30 at Qualcomm Stadium in San Diego. Read full UWBadgers.com release.

We're heading to San Diego! Who's coming with us to the @HolidayBowlGame? #Badgers https://t.co/Gek7HaIi11 pic.twitter.com/kxfgcMYgDy