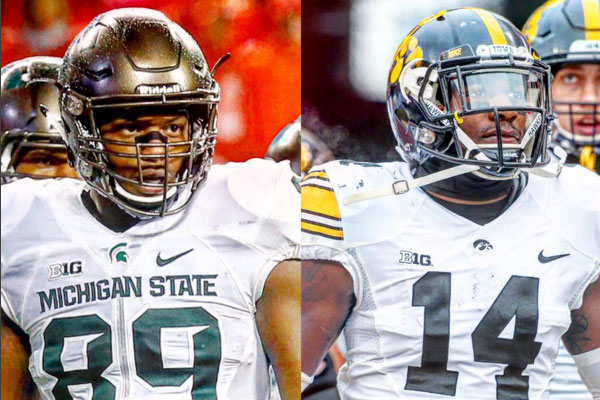 Game day is here. Who is going to win the Big Ten championship? Will it be the 12-0 Cinderella Iowa Hawkeyes? Or the resilient and battle-tested 11-1 Michigan State Spartans?

My head tells me to take the Spartans, but my heart tells me to opt for the Hawkeyes. So, I am going with Iowa in the upset. This is a special season for Kirk Ferentz's squad, and I don't think the Hawkeyes' magic ride is going to end Saturday night. More history beckons.

There is a lot to like about Michigan State. No. 1, the Spartans have more talent than Iowa-beginning with an edge at the most vital position on the field: quarterback. Michigan State's Connor Cook is a special player. In fact, he's the best signal-caller in school annals who time and again has helped the Spartans find a way to win on many Saturdays when MSU didn't play its best. It's called being resourceful and not flinching in the face of adversity. It's about just getting the job done, as Cook and Co., have dealt with several big injuries that threatened to derail the season-but never did. It has been impressive to behold.

But, Iowa has a mojo about it that I can't put my hands around. It's intangible. It's nebulous. Back in August, I thought the Hawkeyes potentially could lose their opener to Illinois State, one of the most powerful FCS schools in the nation. But the Hawkeyes easily dispatched the Redbirds, 31-14, and haven't looked back.

There were close calls vs. Pitt and at Wisconsin. But, for the most part, Iowa rolled through its schedule unchallenged. Mock that schedule if you want. Yes, it included just two wins over ranked teams (10-6 at No. 19 Wisconsin and 40-10 at No. 20 Northwestern). Still, to go 12-0 vs. any slate is a big accomplishment.

Now, the Hawkeyes find themselves on the precipice of their first Big Ten title since 2004 and a spot in the College Football Playoff. And Iowa will win tonight because of two things.

1. QB C.J. Beathard. The guy reminds me of legendary college and NFL quarterback Kenny Stabler. No, Beathard isn't a lefty and he has cut his hair, but he's a tough guy with athletic ability who isn't afraid to take a chance to make a play. It's a riverboat gambler element. And Beathard's strong arm has made this offense more dynamic. The junior makes those around him better-which is the ultimate goal-and is a winner: 13-0 as a starter says it all. Plus, Beathard has a swagger that all the top signal-callers possess and a "follow-me-it-will-be-OK" quality that calms teammates.

2. Trench play. Yes, Michigan State has one of the top defensive lines in the nation led by super end Shilique Calhoun. And a Spartan offensive line broken by injury is back together. Still, I think Iowa's tough and physical offensive front will get a push vs. MSU's d-line to establish a deep collection of running backs. And the gritty Hawkeye defensive line will mute a Spartan rushing attack that lacks a star. That will allow Iowa to get after a Spartan offense that at times can be too pass-oriented.

So, there you have it. Iowa will win. My prediction for the final score: Hawkeyes 28, Spartans 24.