The 2015 Big Ten Football Championship Game from A to Z 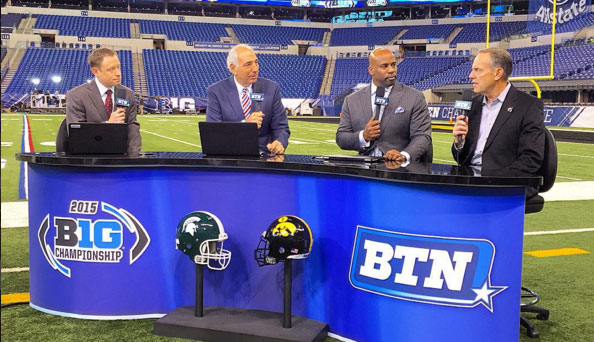 The 2015 Big Ten Football Championship is set to kickoff at 8:17 p.m. ET on Saturday night. No. 4-ranked Iowa (12-0) will take on No. 5 Michigan State (11-1) for a conference title and a spot in the second annual College Football Playoff.

In anticipation for Saturday, here's an A to Z look at the Big Ten Championship Game.

A is for athletes. This game will feature plenty of them. One of the top matchups in this contest will be Iowa cornerback Desmond King vs. Michigan State wide receiver Aaron Burbridge. Both are having All-American caliber seasons and both are outstanding athletes.

B is for blue blood. Mark Dantonio's best quote from Friday's press conference came when a reportor asked him if a win tomorrow makes Michigan State a college football blue blood. His response — "I hope not. I hope we stay grounded in who we are as a program."

C is for Connor and C.J. The two quarterbacks in this game and the top two signal callers in the Big Ten this season. Connor Cook and C.J. Beathard have combined for 38 touchdowns this year, compared to just seven total interceptions. That's impressive.

D is for Dantonio. The Spartans' head coach has been one of the best coaches in America over the past decade. Dantonio is the only coach in Big Ten history to record five 11-win seasons in a six-year span.

E is for expectations. They were fairly high for Michigan State heading into the season, but not so for Iowa. In fact, most preseason predictions had Ohio State and either Wisconsin or Nebraska playing in this year's Big Ten championship game.

F is for Ferentz. Kirk Ferentz was named the Big Ten's Coach of the Year this week, and rightfully so. Ferentz has led Iowa to a school-record 12 wins this season and the first undefeated regular season since 1922.

G is for grouper. As in grouper sandwiches, which Ferentz recalled sharing with Dantonio the first time they met recruiting on the road. Dantonio was the defensive coordinator at Youngstown State at the time, while Ferentz served as the offensive line coach at Iowa.

H is for Hawkeyes. Expect there to be a whole lot of them in Indianapolis this weekend. Iowa has one of the most passionate fan bases in all of college football, which means they will certainly travel to see their team play in Indy.

I is for interceptions. Iowa leads the Big Ten this season with 17 interceptions, a mark that is tied for the eighth most nationally. On offense, the Hawkeyes threw only three interceptions this year. Only Navy has thrown fewer picks than Iowa among FBS teams.

J is for Josey. As in Josey Jewel, the Hawkeyes' outstanding sophomore linebacker. Jewel leads Iowa in tackles with 111, which ranks fifth in the Big Ten.

K is for King. Iowa's shutdown corner Desmond King is arguably the top defensive back in the nation this season. He was born and raised in Detroit and was actually not offered a scholarship by Michigan State, which is one of many outstanding storylines in this week's game.

L is for Lucas Oil Stadium. The site of Saturday's Big Ten Championship Game, which is set to kickoff at 8:17 p.m. ET on Fox.

M is for Malik McDowell. The Spartans' talented defensive tackle has been nothing short of outstanding this season. The 6-6, 286-pound sophomore has been one of the focal points on a unit that is among the best in the country.

N is for never. Before Mark Dantonio became Michigan State's head coach in 2007, the Spartans had never recorded more than 11 wins in a season.

O is for opportunity. The Big Ten title game marks an opportunity for one of these teams to punch their ticket in the four-team College Football Playoff.

P is for penalties. The Spartans ended the 2015 regular season averaging under 41 penalty yards per game, which was the second-fewest of any team in the Big Ten. That could be a huge factor in determining the outcome of Saturday's big game.

Q is for quality wins. That is something the college football playoff committee will look at very closely when determining which teams will play in the four-team playoff. While Iowa has only one win against a team currently ranked right now (Northwestern), the Spartans have three wins (Oregon, Michigan, Ohio State) over teams ranked in the top 16 heading into this weekend.

R is for running backs. There are plenty of good ones in this game as both teams have exceptional depth at the position. Michigan State and Iowa both feature three backs with more than 400 rushing yards this season, which is extremely rare.

S is for Spartans. The Spartans have been here before. In fact, this is MSU's third trip to the Big Ten Championship Game in its five year existence, which could serve as an advantage in Saturday's game.

T is for Twelve. As in the number of wins Iowa has posted this season, which only one other team in the FBS can say (Clemson).

U is for underdog. That is Iowa in this game, despite the Hawkeyes' unblemished record this season. Chances are this game will be a close one, unlike last year's 59-0 outcome.

V is for victory. A victory for Iowa would put the Hawkeyes in some elite company, making them just the third team in Big Ten history to start a season 13-0, joining Minnesota in 1904 and Ohio State in 2002. A victory for MSU would give the Spartans the second 12-win season in program history (2013).

W is for wins. Michigan State and Iowa have a combined 23 wins heading into Saturday's championship game. That is tied for the highest combined win total of any two teams playing in a conference championship game this weekend.

X is for x-factor. And there is at least one for both teams in this game. For Michigan State, it's TE Josiah Price on offense and Craig Evans on defense. For Iowa, it's Tevaun Smith on offense, and Nate Meier on defense.

Y is for young. As in Michigan State's secondary, which features just one senior in Arjen Calhoun. Motee Nicholson (sophomore), Grayson Miller (freshman) and Tyson Smith (freshman) are all expected to see action in MSU's secondary on Saturday.

Z is for zero. That's how many trips Iowa has made to the Big Ten Championship. This will be a huge first test for the Hawkeyes against an MSU team that is playing in the game for its third time in five years.