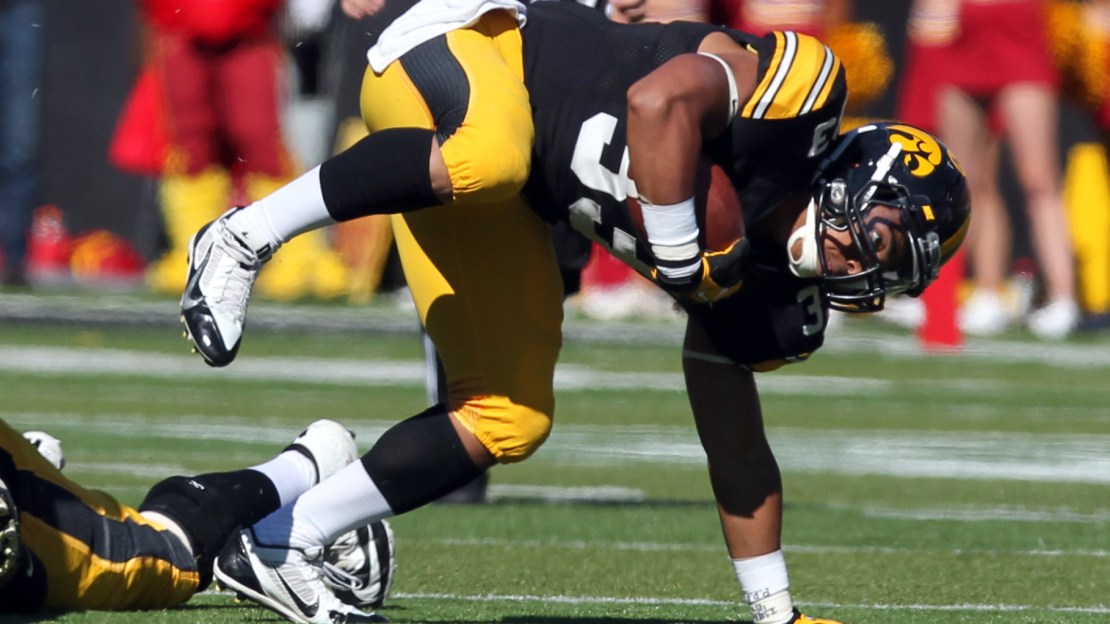 Two teams. One conference championship. Who has the edge when Michigan State and Iowa meet on Saturday night under the glow of the Lucas Oil Stadium lights in Indianapolis? Who knows for sure? That's why they play the games.

Still, that won't stop me from taking a look at each offensive unit for each team.

Let the comparisons on offense begin.

QUARTERBACKS
Have right arm, will travel. Michigan State?s Connor Cook is the Big Ten?s ultimate sheriff, the best signal-caller in the Big Ten. The senior is hitting 57.6 percent of his passes with 2,730 yards, 24 touchdowns and just four picks. Best of all: Cook is winner, sporting a 33-4 mark in his career and 22-2 ledger vs. Big Ten foes. No wonder many consider him to be the program?s best quarterback ever. Sorry, Kirk Cousins and Tony Banks. C.J. Beathard?s long, flowing locks were cut before the season, but the guy they call ?Sunshine? has only gotten better. The Iowa QB has validated his coaches? decision to name him the starter over Jake Rudock last January. Beathard is 13-0 as a starter, completing 60.7 percent of his attempts for 2,354 yards with 14 TDs and just three picks.
EDGE: Michigan State

RUNNING BACKS
No shortage of options for Iowa, which may have the deepest collection of backs in the Big Ten. Check it out: Iowa has had three running backs who have rushed for at least 195 yards in a game this season. Jordan Canzeri (256), Akrum Wadley (204) and LeShun Daniels (195) have all accomplished the feat, making the Hawkeyes the first FBS school to do so since LSU in 1997. Canzeri needs 36 yards to reach 1,000 on the season. Michigan State lacks a star but has capable legs in LJ Scott, Gerald Holmes and Madre London. Scott is a true freshman bulldozer with a bright future who leads the club with 618 yards and 10 TDs. He?s the next great one in East Lansing.
EDGE: Iowa

Get more Big Ten Football Championship coverage via the links below:

RECEIVERS
The Spartans have a deep collection of talent led by Aaron Burbridge, the Big Ten Receiver of the Year after pacing the conference with 75 receptions for 1,158 yards and seven TDs. He?s the epitome of clutch. This group has nice depth with RJ Shelton and Macgarrett Kings, Jr. And tight end Josiah Price is another handy tool for Michigan State. Iowa lacks the Spartans? depth of talent but still has a good one in Matt VandeBerg, who led the club with 59 catches for 625 yards with three touchdowns. The Hawkeyes like to use their tight ends, as Henry Krieger-Coble and George Kittle are nice options down the middle. Overall, there isn?t much flash or explosiveness with Iowa?s collection of pass catchers.
EDGE: Michigan State

LINE
Michigan State?s unit was hailed by yours truly as the Big Ten?s best back in August. But injuries took a toll on this powerful front. The good news for them: They're healthy and led by left tackle Jack Conklin and center Jack Allen, who may be the toughest player in the Big Ten. Iowa has a classic Hawkeyes front, a punch-you-in-the-nose unit whose strength is inside with guard Jordan Walsh and center Austin Blythe. Keep an eye on Boone Myers, who may be the program?s next great left tackle following in the footsteps of Brandon Scherff, Robert Gallery, Bryan Bulaga and Riley Reiff, among others.
EDGE: Even