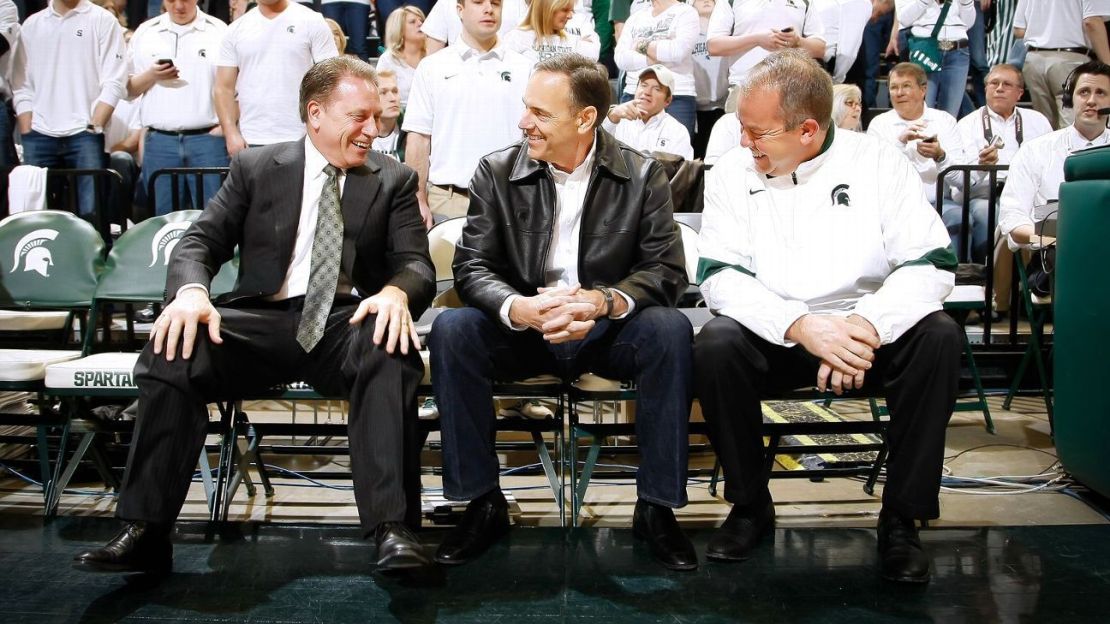 December is here, which means the college football season is coming to a close and basketball is in full swing.

[ MORE: Track all of our 2015 Big Ten Championship coverage ]

The Big Ten is set to crown a conference champion in football this weekend as Iowa takes on Michigan State in the fifth annual Big Ten title game. The winner of that game will likely punch their ticket to the College Football Playoff.

In basketball, three Big Ten teams are ranked in the top 11 in the country, as two of them (Michigan State and Purdue) remain unbeaten.

There has been plenty of talk surrounding the top college football/basketball coaching duos in America, but what about the athletic directors? How about some love for the guys who make playing on an Aircraft Carrier, or bringing in elite-level coaches possible?

Football: Mark Dantonio – There isn't a better coach in America over the past six years than Dantonio. In that time span, he has compiled a 64-9 record, including an impressive 4-1 mark in bowl games and a chance to add to that total this season. He has led the Spartans to three appearances in the Big Ten title game in its five year existence. Most impressive, Dantonio is the first coach in Big Ten history to record five 11 win seasons in six years. – Merriman

Basketball: Tom Izzo – Considered by many to be one of the greatest coaches in college basketball history, Izzo has the Spartans out to a great start in his 21st season as MSU's head coach. The Northern Michigan native just picked up his 500th career victory, making him just the eighth Division 1 coach to reach that milestone in his first 21 seasons. During his time at MSU, Izzo has led the Spartans to seven Final Fours, seven Big Ten championships, four Big Ten Tournament titles, and one national championship. – Merriman

Athletic Director: Mark Hollis – He is a master P.R. man whose genius in scheduling off-beat and innovative events (a hoops game on an aircraft carrier?) has helped elevate the program. And Hollis knows how to keep his house happy and in order. Hollis has been especially influential in basketball. He has been a member of the NCAA Division I Men?s Basketball Committee since 2012, was named vice chair for the 2015-16 season and chair of the committee for the 2016-17. He also was a former chair of the NCAA Division I Amateurism Cabinet and a former member of the NCAA?s Men?s Basketball Issues Committee. – Dienhart

Football: Urban Meyer – The resume speaks for itself, with the highlight being three national titles to go along with a sparkling 152-27 record in 14 seasons. Meyer has lost more than three games in a season just two times. His spot in the College Football Hall of Fame awaits. – Dienhart

Basketball: Thad Matta – A guy who will likely go down as one of the top coaches in Big Ten history, Matta has been outstanding since arriving at Ohio State in 2004. He recently picked up his 300th victory at OSU, making him the only coach in the school's history to accomplish that feat. Matta has led the Buckeyes to five Big Ten conference titles, four Big Ten Tournament titles and two Final Fours. He has won 20-or-more games in all 11 seasons at Ohio State. – Merriman

Athletic Director: Gene Smith – He oversees a behemoth, an absurdly wealthy department that sets the bar from a facilities and competitive standpoint. And Smith maintains harmony amid the cauldron of pressure and big expectations at a school with 36 sports and over 1,000 athletes. To who much is given, much is expected. And, Smith delivers. – Dienhart

Football: Paul Chryst – The cerebral Chryst is the epitome of laid-back and reserved. But when it comes to offensive knowledge, he is a dynamo who has few peers. The native son of Wisconsin is poised to keep the Badgers among the Big Ten elite. – Dienhart

Basketball: Bo Ryan – The master of consistency when it comes to college basketball, Ryan has finished in the top four of the Big Ten standings in all 14 years he has been at Wisconsin. He has led the Badgers to four conference titles, three Big Ten Tournament championships and two Final Four appearances. He ranks among the top active coaches in career wins with 744. That's incredible. – Merriman

Athletic Director: Barry Alvarez – The godfather of Wisconsin athletics who literally and figuratively has built this into one of the top departments in America. Alvarez got the ball rolling as football coach in 1990 before coming A.D. in 2004. The Badger programs continue to excel — especially in the high-profile sports — and academics remain excellent, too. – Dienhart

Football: Pat Fitzgerald – He no longer is a ?kid? coach, as the 40-year old ?Fitz? already is in his 10th season at his alma mater. Fitzgerald is Mr. Northwestern, the perfect brainy and brawny embodiment of this majestic school who arguably already is its all-time best coach. – Dienhart

Basketball: Chris Collins – Considered one of the top up-and-coming college basketball coaches around, Collins enters his third season at Northwestern with his eyes on leading a program to its first-ever NCAA Tournament appearance. Collins served as an assistant coach under Mike Krzyzewski at Duke from 2000-2013 before being named the Wildcats' head coach. He has Northwestern off to a 6-1 start this season, the third best record in the Big Ten at this point. – Merriman

Athletic Director – Tom Phillips – The quintessential "smartest man in the room," Phillips is a rising star who is the chair of the NCAA Division 1 Council. He also is the only representative athletic director on the NCAA Division 1 Board of Directors, the first-ever sitting athletic director to serve on the board. Phillips is a wanted man, as Illinois and Michigan have made runs at him recently. – Dienhart

Football: Kirk Ferentz -Heading into this season, Ferentz knew it would take a major turnaround to get the Hawkeyes back to where they wanted to be. Now, Ferentz and the Hawkeyes are sitting at 12-0 and ranked No. 4 in the country. The 60-year-old Ferentz is enjoying his best season as the Hawkeyes' head coach, but he has had plenty of success up to this point. He has posted a 127-85 record in 17 seasons at Iowa, including two Big Ten championships, one West division title, and 12 postseason bowl appearances. – Merriman

Basketball: Fran McCaffery – He has three straight 20-plus win seasons at Iowa, including back-to-back NCAA Tournament bids. In his sixth year in Iowa City, McCaffery is 100-76 (.569) and 30-24 in Big Ten play since 2012. Iowa is McCaffery's fourth college heading coaching job, and he has taken all four Division I programs to the NCAA Tourney. That's incredible. – Merriman

Athletic Director: Gary Barta – He has augmented facilities, highlighted by the recent completion of the Hansen Performance for football. And he finally got Carver-Hawkeye Arena renovated. He also oversees the top ranked Big Ten football team in the nation currently. – Dienhart

* Michigan was included in our original list, however, due to recent news of the school's upcoming search for a permanent athletic director, they have been removed.