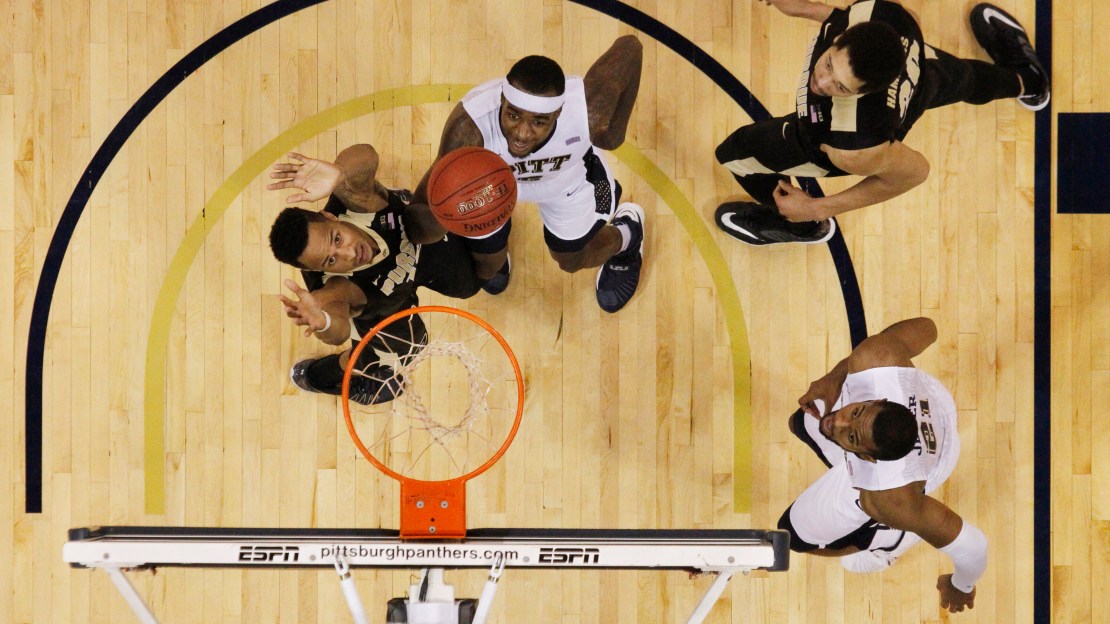 This year's Big Ten/ACC Challenge was one for the books. Big Ten fans were treated to several outstanding games and individual performances. In this post, I give my takes on Purdue's balance, several Big Ten players rising up and Northwestern's hot start.

Imagine the daunting task of drawing up a scouting report on how to guard the No. 11-ranked Purdue Boilermakers. Most defensive plans wisely focus on an opponent's top two or three players and build from there. Walk in any locker room in the country, and there will be a paragraph written on the whiteboard describing the strengths and weaknesses of an opponent's top players, and a sentence following the names of players coming off of the bench.

The dilemma facing all of Purdue's future foes is that after a 7-0 start, no one can figure out who Purdue's best player even is, let alone who would qualify as their second or third best. Every Boiler is contributing at a high level, and it is causing sleepless nights for the assistant coaches expected to scout them.

A.J. Hammons entered his senior season at Purdue as an All-Big Ten candidate and potential NBA first round draft pick. Unfortunately, due to a suspension, Hammons didn't touch the floor for the first two games. For most teams, that spells trouble. For Purdue, it spelled opportunity. Freshman Caleb Swanigan, Indiana's reigning Mr. Basketball, introduced himself to the Big Ten with an 11-point, 11-rebound dandy, and sharp shooter Kendall Stephens hit four triples as Purdue routed North Carolina A&T.

Swanigan is bull strong and cat quick, and he is going to cause nightmares for Big Ten forwards this winter. Against Vermont, gym rat Dakota Mathias filled it up with 17 points and Swanigan added a 14-point, 13-rebound encore. Purdue torched the nets for a school-record 18 3-pointers and put to rest any misconceptions that its dominant front line is going to have to carry the load.

Hammons returned against Incarnate Word, but he wasn't needed, as 7-foot-2 Isaac Hass continued his improved play with 17 points and 12 rebounds. Against Old Dominion, Haas and Hammons crushed ODU, combing for 28 points and 14 rebounds. Then came Purdue's first big test in the championship game of the Hall of Fame Tip-Off against Florida. It was the Big Ten's reigning defensive player of the year, Rapheal Davis, who took over the game with 18 clutch points. Purdue pounded the Gators 85-70. The biggest concern for Boiler fans heading into this season was point guard play, but against Florida, P.J. Thompson scored career highs in points (15) assists (4), and rebounds (5) while committing no turnovers!

In a home route of lowly Lehigh, lost in Isaac Haas' career high 24 points was the stellar floor game of transfer point guard Johnny Hill off of the bench. Hill finished with 13 points, and along with Thompson has proven early in the season that the point guard position is in good hands. Purdue's depth is so impressive, that I haven't even mentioned my favorite Purdue cager, sophomore Vince Edwards. Edwards put in another all-around beauty against LeHigh with nine points, 10 rebounds and seven assists. Mark my words, Edwards will record at least one triple double this season.

Finally, in an intimidating road test at Pitt in the ACC/Big Ten Challenge, the Boilers showed why their balance and toughness could lead them to a Big Ten Championship. Their leader, Davis, missed his second game with a knee injury and surely his presence would be missed in such a physical matchup. Once again, someone new stepped up for Purdue. With Haas in foul trouble, Hammons played like a lottery pick, finishing with 24 points and 12 rebounds. But it was freshman Ryan Cline who hit 4 clutch three's in the second half to shake off any Pitt attempt at a comeback. No Davis, no problem.

Purdue can win in several different ways with several different players contributing. They are now the No. 1 field goal percentage defense in the country, holding teams to under 32 percent. Last year Purdue was 0-4 when getting outscored in the paint, but due to their prolific shooting, they are 3-0 this season. The Pitt game was the fourth time this season Purdue hit ten triples in a game. Thompson has one turnover on the entire season. It gets worse for those assistant coaches working on a scouting report. Against Pittsburgh, Matt Painter started four sophomores and a freshman!

With so much experience and firepower returning to the Big Ten this season, it is going to be difficult for new players to make a name for themselves. We all know about the five star freshman, the potential NBA first rounders and the wily veterans, but during the ACC/Big Ten Challenge there were a few new faces who rose up and lead their teams to victory.

Ethan Happ, Wisconsin. The Big Ten's most impressive road win had to be the Badgers upset of No. 14 ranked Syracuse in the Carrier Dome. The 'Cuse have been dominant this season and were heavy favorites at home. After getting blown out at No. 7 ranked Oklahoma last weekend, Wisconsin needed someone other than Nigel Hayes or Bronson Koenig to step up. Redshirt freshman Ethan Happ answered the call with 18 points and 15 rebounds including a late slam in overtime to seal the 66-58 overtime victory.

Duncan Robinson. Michigan. Robinson was brilliant for Michigan and is already one of the Big Ten's best stretch shooters. In a win at North Carolina St., Robinson drilled five three's and scored 17 points on only 8 shots. If anyone doubted whether or not the success of a Division III player could transfer to the Big Ten, Robinson answered those questions last night.

Jordan Murphy, Minnesota. Murphy was a star for the Gophers, slashing his way to the basket for 24 points and 10 rebounds in a 89-83 victory over Clemson in the Big Ten/ACC Challenge. The 6-foot-6 freshman looks to be a perfect fit for Richard Pitino's pressing and running system.

Is this the year Northwestern breaks the curse and celebrates a Selection Sunday invite into the Big Dance? The odds say no, but I'm keeping my eye on the 'Cats, and so far I like what I see. Northwestern won an 81-79 overtime thriller on the road against Virginia Tech in the ACC/Big Ten Challenge thanks to a game winning drive by super sophomore Bryant McIntosh and a gutsy defensive stop by the Cats with the game on the line.

As I pointed out at the beginning of the season in my "14 Burning Questions" column, if Northwestern is going to dance they are going to have to win close ball games, and last night was a big win to celebrate. Ironically, it could end up being Virginia Tech transfer Joey Van Zegeren who pushes the 'Cats over the edge. He is the athletic veteran forward the program has been missing to team with big man Alex Olah.

Tre Demps showed up like he always does with 17 points, and Chris Collins had to be thrilled with the play of Sanjay Lumpkin and Nathan Taphorn; the duo combined for 23 points. Due to the high rankings many Big Ten teams possess and the strength of the Big Ten Conference, Northwestern will get multiple opportunities to pick up quality wins going forward, and most of their victories will have to be seized late in games.

Northwestern is hoping the heroics at Virginia Tech paves the way for many late game victories.