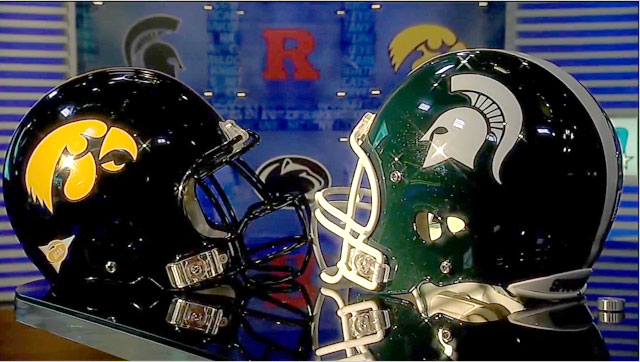 After 13 weeks of intense competition, it all comes down to this: The Big Ten Football Championship game in Indianapolis on Saturday at 8 p.m. ET. The winner likely heads to their first-ever College Football Playoff while the loser falls to the one of the six New Year?s bowl games.

And what a run it has been for our two remaining teams: Michigan State and Iowa.

The Spartans come into this weekend?s matchup having won at least 11 games for the fifth time in their last six seasons, something only four other FBS teams can claim: (Alabama, Northern Illinois, Ohio State, and Oregon). Prior to Mark Dantonio?s arrival in 2007, Michigan State had never recorded more than 11 wins in a season and had only two 10-win seasons (1965 and 1999).

On the flipside, the Hawkeyes have won a school-record 12 games this season after going 7-6 in 2014. This year is Iowa?s largest wins improvement from one season to the next since going from three wins in 1955 to nine wins in 1956 (+6 wins). After recording its first undefeated regular season since 1922, Iowa comes into this weekend?s matchup looking to become just the third team in Big Ten history to start a season 13-0, joining Minnesota in 1904 and Ohio State in 2002.

Saturday?s game will be the first AP Top 5 matchup of Big Ten teams since No. 2 Michigan faced No. 1 Ohio State in the 2006 regular-season finale. However, what makes this meeting so special is the fact that this will be the first Big Ten AP Top 5 matchup not involving at least Michigan or Ohio State since No. 3 Wisconsin beat No. 5 Minnesota, 14-9, on Nov. 24, 1962.

With history on the line and the tension palpable, here are five facts to keep in mind when you tune in for the Big Ten Championship Game this weekend at 8:17 p.m. ET on Fox. Our pregame show starts at 6:30 p.m. ET on BTN/BTN2Go before switching to FOX at 7:30 p.m. for the remainder of the pregame and the game broadcast. Then come back to BTN for extensive postgame coverage.

1. Despite playing in many close games, Michigan State has stayed remarkably disciplined this season. Since 2010, the Spartans have posted 13 fourth-quarter comeback victories, tied with Northern Illinois and Notre Dame for the most in the FBS over that time frame. And in order for Michigan State to put themselves in those positions, the Spartans have had to stay focused on not making silly mistakes.

The Spartans ended regular season play averaging 40.6 penalty yards per game, the second-fewest in the conference: (Northwestern - 40.1). Against Rutgers on Oct. 10, Michigan State committed just one penalty, its fewest in a conference road game since Nov. 23, 1996 at Penn State (one).  In 2014, Michigan State averaged 58.0 penalty yards per game; the second-most in the conference: (Indiana - 60.7). Not once did they finish a game with fewer than three penalties during Big Ten play.

2. Interceptions have played a major factor in Iowa?s success this season on both sides of the ball. Iowa lead the Big Ten this season with 17 interceptions, a mark that tied was tied for the eighth most nationally. Four different Hawkeye players recording an interception in the win against Nebraska last weekend, the first time since Oct 23, 2004 Iowa had accomplished that in league play.

Offensively, only Navy (2) has thrown fewer interceptions than Iowa has among FBS teams. The Hawkeyes were picked off on just one percent of their passes this season. That's the lowest rate by any Big Ten team since at least the 1996 season (minimum 12 games played).

3. Despite some struggles this season for consistency, Michigan State?s rushing game has a bright future. With the loss of Jeremy Langford, Michigan State has seen its rushing decline by 75.6 yards per game this year, the second-largest drop-off of any Big Ten team from last season: Wisconsin (-172.0). In fact, L.J. Scott leads the team with only 618 rushing yards, the fewest by a MSU single-season leader since Larry Caper led the 2009 Spartans with only 468 rushing yards.

However, the future of the Michigan State run game is bright as each of their top three rushers is either a freshman or a sophomore. Michigan State and Western Michigan are currently the only FBS teams with three different underclassmen with more than 400 rushing yards in 2015.

4. The battle of halftime adjustment will be key, particularly regarding Iowa?s passing offense. For whatever reason, the Hawkeyes have struggled to throw the football in the second half of games this season. Only Boston College (301), Georgia Tech (286) and Kansas State (270) had fewer passing yards in the third quarter than Iowa (313) among ?power? conference teams.

5. Michigan State linebacker Riley Bullough has done a little of everything for the Spartans on defense this season. A second-team All-Big Ten selection by the media, he is currently one of just three ?power five? players who has posted 90-plus tackles, four-plus sacks, and two interceptions this season, joining Arizona State?s Jordan Simone and LSU?s Deion Jones.

Bullough is the first Michigan State player to post those numbers in any season since linebacker Mike Labinjo in 2003. In Week 12 against Maryland, he posted a 44-yard interception return for a touchdown. That was the longest pick-six by a Michigan State linebacker since the late T.J. Turner?s 88-yarder at No. 20 Purdue on Oct. 16, 1999.