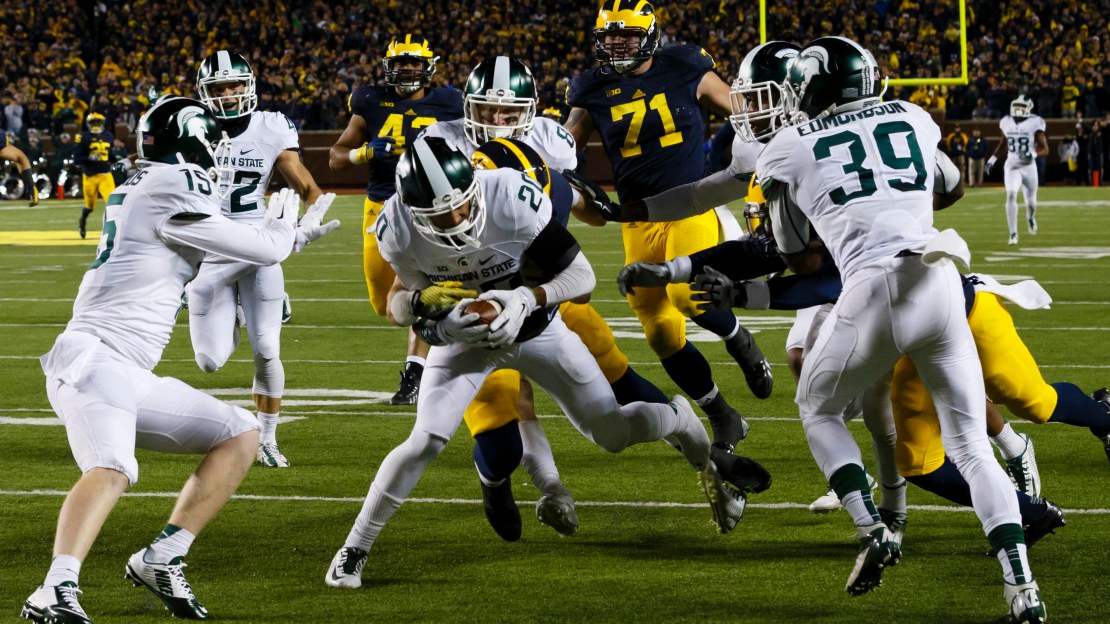 Michigan State pulled together another strong football season. As the Spartans head into Saturday's big game, I lay out what I believe are Michigan State?s three defining games in 2015.

See the games and relive the highlights in the post below.

But this season, the Spartans got a signature non-conference win vs. a national power it had been yearning for. This, ladies and gentlemen, is what they call a ?program builder? and further validated the elite status of Mark Dantonio?s program.

2. Oct. 17. Stupendous. Miraculous. Whatever you want to call Michigan State?s win at Michigan, you?ll probably never see another ending like it. Just 10 seconds hung on the clock, as the Wolverines clung to a 23-21 lead. Just punt the ball, and victory would belong to Michigan in Jim Harbaugh?s first battle vs. the Spartans. But that?s when it happened. Wolverine punter Blake O?Neill bobbled a low snap, got spun around and hit as he tried to get off a kick.

The ball popped loose and was scooped up by MSU?s Jalen Watts-Jackson. He raced 38 yards to pay dirt and immortality. The game clock read 0:00, a hush fell over a jammed Big House and Michigan State skipped back to East Lansing with a mind-bending 27-23 victory and 7-0 mark. Maybe this could be a special season in spite of the myriad injuries that had hit the roster.

3. Nov. 21. This is where the Spartans? title hopes would die, right? How was Michigan State going to win at Ohio State without Connor Cook? The BMOC dressed and warmed up as drizzle fell from the Columbus sky, but a cranky shoulder wouldn?t cooperate. So, Cook sat and watched. No problem. Michigan State shrugged its shoulders and moved on, deftly using backup signal-callers Tyler O?Connor and Damion Terry to engineer an improbable 17-14 win in the Horseshoe that torpedoed Ohio State?s 23-game winning streak-and severely dented the Buckeyes? title hopes.

Even zanier, this was the second time this season that Michigan State won a game as the clock expired. This time, kicker Michael Geiger did the honors, drilling a 41-yard field goal as the final gun sounded. Kudos to the Spartan defense, which sat on Ohio State?s offense, yielding just 132 yards and causing star Buckeye running back Ezekiel Elliott to rip his coaches? game plan after running only 12 times for 33 yards. Meanwhile, the Spartans just smiled and left town in control of their destiny.