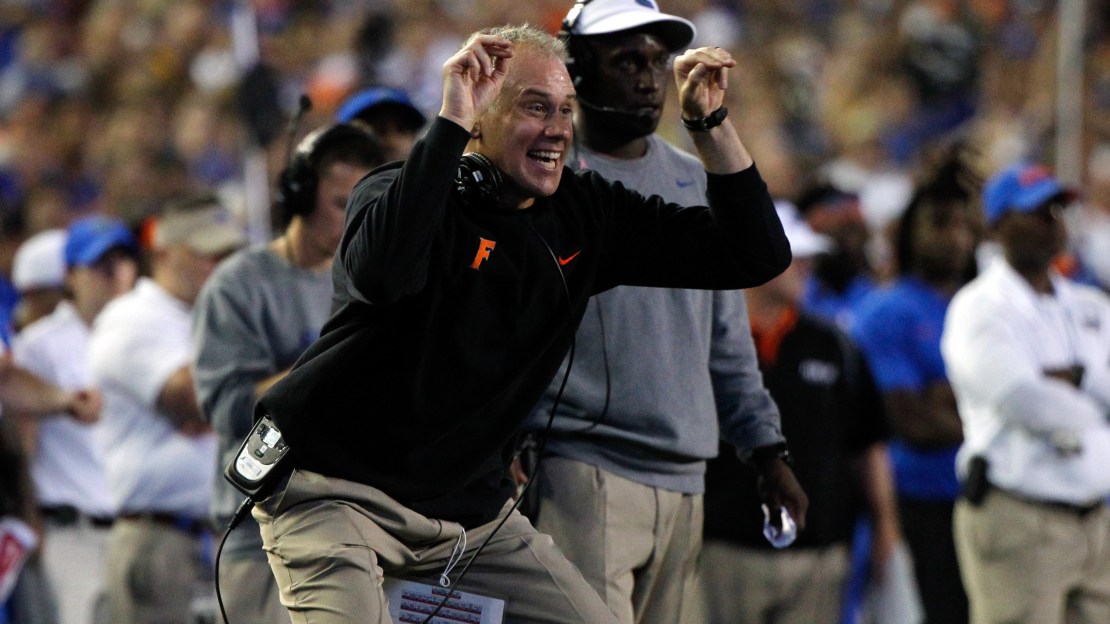 Durkin did a good job coordinating Michigan?s defense in Jim Harbaugh?s debut season. The Wolverines were No. 1 in the Big Ten in total defense (259.0 ypg) and No. 3 in scoring defense (15.0 ppg), as the defense became a cornerstone in a turnaround 9-3 season.

Durkin, 37, came to Ann Arbor after a five-year run at Florida, the last two in which he was the coordinator. The Gators? thrived in two seasons under Durkin, finishing 15th in the nation in total defense (329.8 yards per game) in 2014 and eighth in the country in total defense (314.2 yards per game) in 2013. A season ago, following Will Muschamp's firing, Durkin was the interim coach in the Gators' Birmingham Bowl win over East Carolina.

Before going to Florida, Durkin spent three seasons with Harbaugh at Stanford (2007-09), coaching defensive ends and serving as special teams coordinator. With Durkin pushing the buttons, Stanford's ends helped the Cardinal rank 11th nationally in sacks per game in 2007 and 2009.

A native of Youngstown, Ohio, Durkin came to Stanford after serving two seasons at his alma mater, Bowling Green, where worked with the defensive ends in 2005 before taking over linebackers and special teams in 2006.

Durkin replaces offensive coordinator Mike Locksley, who was serving as interim head coach after Randy Edsall was fired six games into the 2015 season. Perhaps Durkin can retain Locksley, who has deep recruiting ties in Baltimore/Washington, D.C., area, as well as the Eastern Seaboard. If Durkin can keep Locksley, it would be a coup.

Edsall left with a 22-33 mark and just two bowls after taking over for Ralph Friedgen. After Edsall-who got the program on stable ground academically and augmented the roster–was fired, Locksley led Maryland to one win, as the Terps finished 3-9 in 2015 after a 2-1 start.

Big issues? A leaky defense that allowed 35.5 points per game and 433.5 yards per game, along with a Big Ten-worse minus-17 turnover margin that saw the Terps toss a national-high 29 interceptions en route to 36 total turnovers, most in America. Only two schools in the nation had a worse turnover margin.

Some thought Maryland would want a big name to create some buzz and energy around the program as it embarks on its third season in the Big Ten. And others felt the Terps needed a proven head coach who preferably had an offensive background. Instead, Maryland tabbed a defensive-oriented coach who never had led a program.

The Big Ten East is a loaded division with the likes of Michigan State (Mark Dantonio), Ohio State (Urban Meyer) and Michigan (Jim Harbaugh), not to mention Penn State (James Franklin). With programs like that led by proven coaches, is Maryland a proving ground for a first-time head coach? Time will tell.

Durkin walks into a situation that teems with promise. Under Armour CEO Kevin Plank plays a big role shaping the school?s image and filling its coffers. The school is converting Cole Field House into an indoor facility and it sits in prime recruiting territory. And the ability to sell Big Ten membership to recruits also is a plus. Bottom line: This is a sleeping giant.