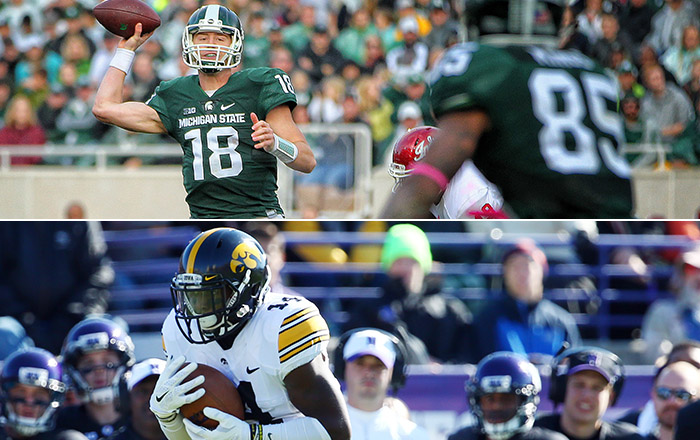 The fifth Big Ten title game shapes up as a playoff play-in game. Win, and you?re in the four-team playoff. It?s that simple. Those are the stakes for Michigan State and Iowa on Saturday night at Lucas Oil Stadium in Indianapolis.

What can we expect from the teams? I talked to some Big Ten coaches off the record to get their unfiltered views on these combatants.

The big thing is, they control the ball. We couldn?t get our offense on the field. They are in the huddle long, they run the ball, they take their time, they eat up the clock. They are efficient, and they end with scores. Every possession for you becomes so critical. If you aren?t a highly-efficient offense, you are in trouble. That is where they make their hay.

They aren?t a big pressure defense. They line up in base stuff. And they keep everything in front of them so they don?t give up big plays. You have to be really efficient on offense and basically score every time you have the ball because you aren?t going to get a lot of possessions.

The best thing C.J. Beathard can do is hand the ball off to those backs. He is a great game manger. When you watch him, his play on money downs, on third downs-and they are in a lot of third-and-medium and third-and-short-go look and see how often they are in third-and-three, third-and-two compared to third-and-seven-plus. When you are in third-and-short, you still have the ability to run the ball. On third downs, he?s a guy who makes the right decisions. And he throws the ball accurately. And he has some athleticism, too. Is he better than (Jake) Rudock? I think so. I?m not a big Jake Rudock fan. I thought he was just OK.

The running backs we saw were good-not great. They are back to having the type of offensive line you are used to Iowa having. That makes those backs go.

When we played Iowa last year, Rudock turned the ball over. The difference between this year and last year is the quarterback play. You can beat Iowa, if Connor Cook is on, they will beat Iowa because you can throw the ball over the top on Iowa. If you have an accurate passer and an ability to throw the ball you have a chance because they don?t have great skill at safety. The one corner, (Desmond) King, is good, but he isn?t great. He got a lot of interceptions. They don?t have anyone who puts any fear in you in the secondary as a cover guy. They play cloud coverage in the boundary and quarters to the field. But it?s not like they are challenging you in man-to-man. So, if you have an accurate guy who can throw the ball, mid-range, down the field throws, I think you can get them.

We had some shots with some guys open down field. They aren?t great on defense. They are just solid. They aren?t going to out-scheme you. They are going to keep the ball in front of them and make you beat them. Their formula is to not beat themselves by keeping everything in front of them and on offense controlling the clock and the tempo and forcing your offense to make every possession efficient. If not, they are going to beat you 10-6, 13-12, stuff like that.

How do you defend them? Commit to stopping the run. We did it. But Connor Cook hurt us. We shut down their run game. You have to stop their run. If they are going to beat you, make them throw it. They really have only one good receiver in (Aaron) Burbridge. Cook goes to him a lot. Find a way to take him out of the game. And you have to hit Cook. But Iowa isn?t very good at getting pressure. They aren?t a huge blitz or pressure team. Cook may sit back there and pick them apart.

They are the best defensive front in the Big Ten. Better than Penn State?s front, they are better than Ohio State. They have some athletic big boys. (Ohio State?s Joey) Bosa didn?t play well but still got defensive lineman of the year, but he didn?t play very well in my opinion. We ran all over them.