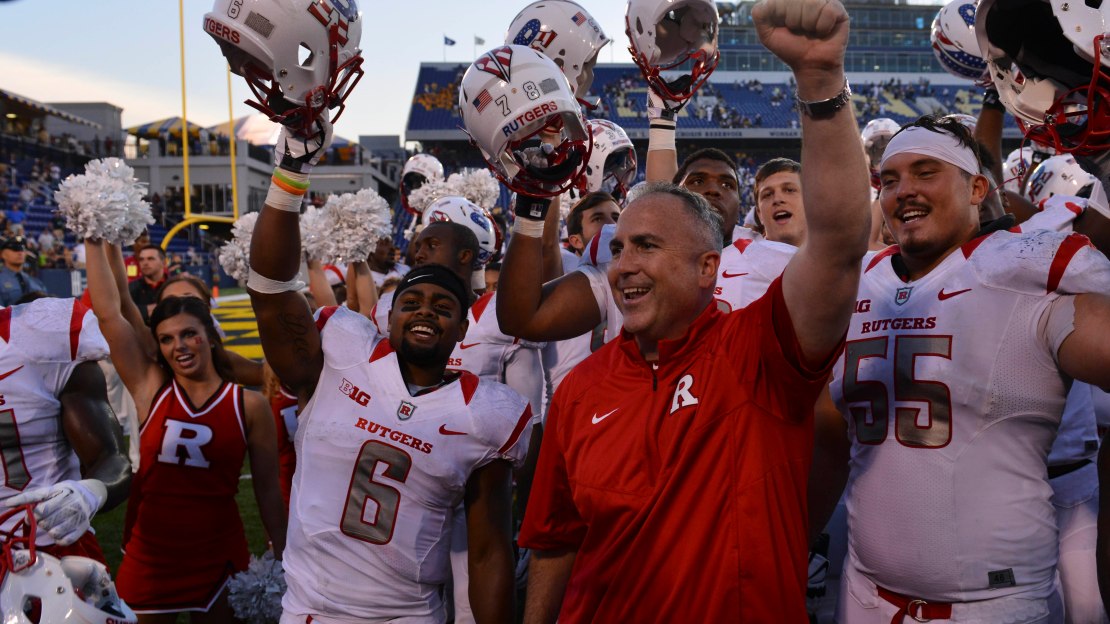 Looks like APR will be used to slot 5-7 teams into bowls-and 5-7 teams will be needed. That?s good news for Nebraska and Minnesota, which have high APRs and 5-7 marks. The Huskers almost look like a lock to make a bowl.

Rutgers is in the market for a coach. And, it?s a crowded market.

And the new AD? He has no experience in football, spending most of his career at Seton Hall. Places like Virginia, Miami, Missouri, South Carolina, Georgia, Syracuse and Maryland also are looking for coaches. This is a big hire for RU ? and the Big Ten?s hopes for a stronger presence out East.

I was sad to see Rutgers? boss Kyle Flood go. I liked the guy. Flood had an emotional good-bye with players on Monday.

"He got a bit choked up, but that's expected," senior linebacker Kaiwan Lewis said in a phone interview with NJ Advance Media. "He invested so much in young men and been around us for so long. He's a great guy, a great coach and I couldn't thank him enough for giving me a chance."

James Franklin already has made one change to his Penn State staff, jettisoning OC John Donovan. Are more alterations coming?

Pennlive.com notes that with Penn State's well-documented offensive line issues, it's difficult to accept a 108th ranking nationally in total offense with these three talents to work with - Christian Hackenberg, Saquon Barkley and Chris Godwin. Penn State's loss to Michigan State was another example of how far behind Franklin's Lions are from the Big Three in the Big Ten East. Penn State is a combined 0-6 against Michigan State, Michigan and Ohio State since the start of the 2014 season. The Lions were outscored 204-89 in those contests. Eighty-nine total points in six games against The Big Three? That's a significant problem.

The rise of Michigan State under Mark Dantonio has been remarkable. The guy has done many things well in constructing his program-a tough, smart, disciplined coach whose teams reflect that. And, interestingly, Dantonio patterned parts of his program after the team he?ll meet in the Big Ten title game-Iowa.

"You try to pattern your program after certain programs," Dantonio said. "When we came to Michigan State after we'd went to Cincinnati, we sort of patterned ourselves after Iowa, actually, said we want to have a fullback, we want to have a power football game.

"That's how we initially started. I think we're pretty diverse, as they are, in terms of what offense we run. We use a lot of tight ends and three-receiver sets. We do use a fullback, still, in our offense, and it has paid dividends. It speaks to toughness."

Good move by Tracy Claeys to tab Dan O?Brien from an administrative role to an on-field one with Minnesota. O?Brien is a smart coach who is well-connected in the state. A very valuable asset.

Good read from Rick Brown of HawkCentral.com on the history that awaits a 12-0 Iowa squad.

Last season's loss to Nebraska at Kinnick Stadium was a disappointing end to underachieving 2014 regular season. A season that compelled Barta to come to the defense of his coach and tell the world Kirk Ferentz was the right man to lead the program. There were plenty of skeptics.

Next is the Big Ten championship Saturday night  in Indianapolis. It is a game that could propel a team that started the season with no expectations into an appearance in the College Football Playoff.

Big props to Indiana?s Kevin Wilson, who has the program in a bowl for the first time since 2007 and just the second since 1993. Now, will it earn Wilson a contract extension?

I will leave you with this good read from the great Lee Barfknecht of Omaha.com on how house cleanings don?t clean up all messes.

That remarkable run of top-four finishes in the Big Ten for Wisconsin hoops may be in jeopardy this season, as Bo Ryan?s crew is off to a 4-3 start.

This team is struggling to shoot and score. And its trademark tough defense isn?t as sticky, either. Still, don?t count out Ryan.