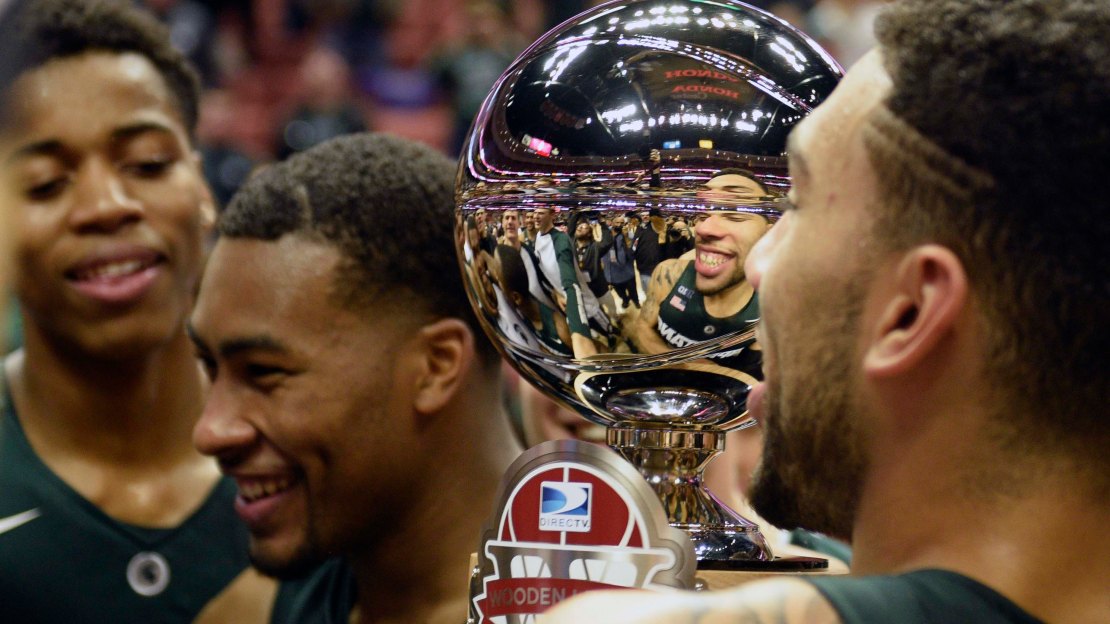 Spartans down Providence, 77-64, in the finals of @TheWoodenLegacy. Four Spartans finished in double figures. pic.twitter.com/2ss1jNKUgX

(AP) Tom Izzo is no fan of college basketball's new rules that sidelined the two best players from each team in the championship game of the DirecTV Wooden Legacy.

Michigan State's Denzel Valentine picked up his third foul early in the second half and Providence's Kris Dunn earned his fourth with 8 minutes remaining Sunday night. In all, three Spartans had three fouls each and the Friars had five players with four apiece.

"I don't think it's fun to have these guys sitting. I don't think it makes our game as good," said the Michigan State coach, who is at 503 career victories after the third-ranked Spartans beat the Friars 77-64 Sunday night.

"There is a difference between freedom of movement and touching a guy 30 feet from the basket. If you're impeding progress, that is a foul," Izzo said. "It's not the officials' fault. They're scared to death. That's the way they're mandated to call it."

"The officials didn't see what I saw," Friars coach Ed Cooley said. "This is the least amount of free throws we've shot since I've been a head coach. We're taking the flow of the game away. I don't agree with it. "

With Valentine struggling, Bryn Forbes scored 18 points and Deyonta Davis had six of his 12 points in a game-ending spurt for the Spartans. Valentine added 17 points, six rebounds and five assists to earn most outstanding player honors, and Eron Harris had 12 points for the Spartans (7-0). They beat Boston College by 31 points in their opener and Boise State by 10 on their way to wrapping up the title.

"I got a little bit out of rhythm with the first foul," Valentine said. "Credit to my guys. They stepped up and played big in a championship game. It might be like this down the road. I might be in foul trouble and I may not play well and guys have to step up."

Dunn had 21 points, five rebounds and seven assists and Ben Bentil had 20 points and seven rebounds for the Friars (6-1). They defeated Evansville by 10 points and No. 11 Arizona by four in the three-day event.

Davis' basket tied the game for the last time at 57-all and launched the Spartans on a 21-7 run to end the game after they trailed most of the second half.

During Michigan State's run, Junior Lomomba hit a 3-pointer that would have given the Friars a 1-point lead, but the officials ruled it was no good after a video review, saying the shot clock had expired.

"I'm very proud of how our young guys were gritty. They were tough," Cooley said. "We can't let this one game define the kind of season we want to have."

It tied Michigan State's lowest scoring game of the season so far and the second-lowest for Providence.

Valentine had a stellar three days out West. He had his second-career triple-double in the first round and then scored a career-high 32 points against Boise State.

Neither team led by more than five points in the first half, and Davis dunked to put the Spartans ahead 34-32 at the break. There were five ties and six lead changes as both teams found success shooting from the perimeter early before going inside.