Power Rankings: Michigan State takes over No. 1 spot this week 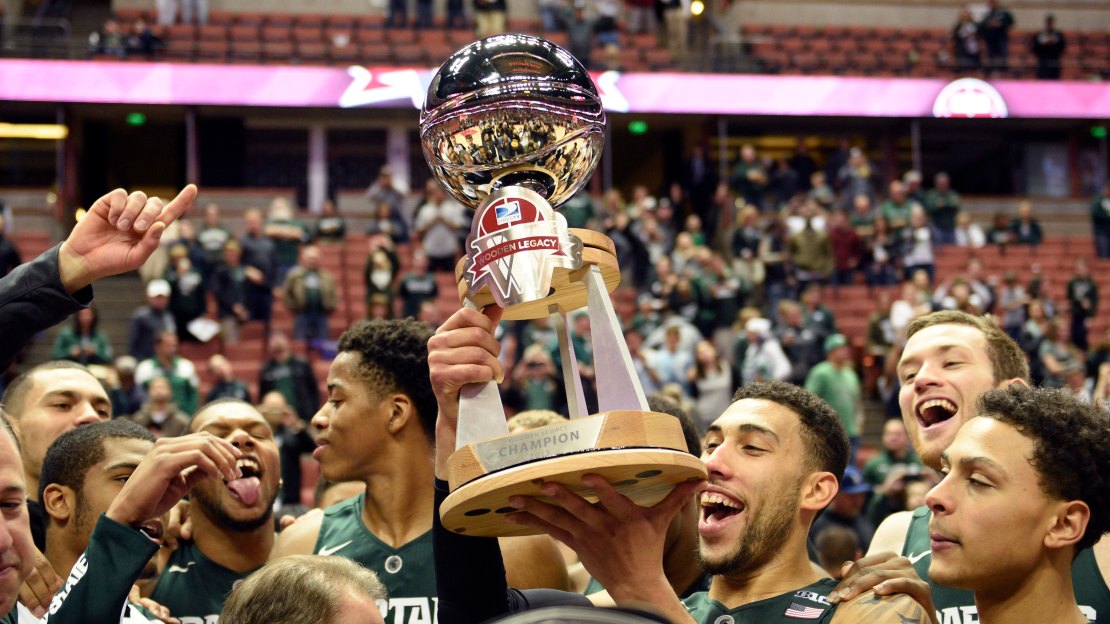 That didn't take long! There's a new team atop my latest Big Ten Power Rankings, presented by ArcelorMittal, and it's impressive Michigan State.

The Spartans (7-0) replace Maryland, undefeated itself, atop this week's list because, well, no one is playing better than Denzel Valentine's team. Don't worry, Terrapins fans, your team is still among the nation's best.

1. Michigan State (7-0). The Spartans are playing the best basketball in the country. Denzel Valentine has been spectacular and Tom Izzo?s move to bring Matt McQuaid in to spell Tum Tum Nairn at the point guard spot brings forth a new dynamic to this team. Deyonta Davis has also impressed as he seems to be getting comfortable with the pace and physicality of the collegiate game.
Last week: 2

2. Maryland (6-0). Maryland may still be the odds-on favorite to win the Big Ten, and possibly more, but it seems to have spacing issues on an offense that boasts two dominant post players. This team has the makeup of a champion, although it has yet to gel. The experience and skill of Rasheed Sulaimon and Robert Carter have been evident, and with a tough matchup against UNC on the horizon, we?ll get a better look at the true potential of the Terrapins.
Last week: 1

3. Purdue (6-0). The Boilermakers may be the most complete team at this point in the season, but the lack of a signature win keeps them somewhat under the national radar. As impressive as A.J. Hammons has been throughout his career, the trio of Hammons, Isaac Haas and Caleb Swanigan will bring out the best of each. Haas has been consistently dominant on the offensive end and the balance and depth around the perimeter will have this team in the AP Top 10 by Christmas.
Last week: T-3

4. Iowa (4-2). The demonstrative wins over Marquette and Wichita State are proof that the Hawkeyes are serious contenders. The biggest challenge for Fran McCaffery will be to develop strategic rotations (substitution patterns) that keep as much experience on the floor at all times. This may not be as much of an issue in the non-conference schedule as it will in Big Ten play, but this could be the key to the Hawkeyes? Big Ten success.
Last week: 5

5. Indiana (4-2). The losses to Wake Forest and UNLV in Maui exposed some serious weaknesses on the defensive end. The good news: All of the issues are correctable. I?m not counting them out just yet because this team still can score in bunches. Beating Duke on Wednesday would certainly get things back on track.
Last week: T-3

6. Illinois (3-4). Toss out the bad losses and ugly record, because Kendrick Nunn and Jaylon Tate are back, and their returns make this team look like a threat. The backcourt tandem of Nunn and Malcolm Hill may be one of the toughest matchups in the Big Ten, as they can play with their back to the basket or face up and hurt you from the perimeter. Mike Thorne continues to improve and appears to be getting more and more aggressive every night out.
Last week: 11

7. Michigan (4-2). The losses to Xavier and UConn are not bad at all. What does concern me about those losses is that the Wolverines got physically out-toughed. Developing toughness to accompany the high level of talent John Beilein has in Ann Arbor will make this team a second weekend team in March.
Last week: 7

8. Northwestern (5-1). Bryant McIntosh and Tre Demps are high-level guards whose aggressiveness on offense will get a lot of teams that lack depth in foul trouble. Scottie Lindsey appears to be stepping up in place of the injured Vic Law; he dropped 26 points in a rout of New Orleans. I still think this team makes the NCAA tournament this year.
Last week: 10

9. Nebraska (5-2). The only two losses come at the hands of top 25 teams (Nova and Cincy). The 12/1/15 matchup against Miami will be yet another great test for Tim Miles and the Huskers. Andrew White and Shavon Shields pick up the level of play and expectation for this team. Nebraska will have to find a consistent third and fourth option offensively to consistently compete at a high level.
Last week: 9

10. Wisconsin (4-3). Bo Ryan has shown a lot of patience with this young team and has relied heavily upon the talent and experience of Bronson Koenig to keep this team in games and win close games down the stretch. As the youth continues to develop and find comfort in the system, expect to see Nigel Hayes emerge as the Badgers? go-to guy. Bo Ryan?s teams will always compete, and I still see this team as a contender for the 7 or 8 spot in the Big Ten conference.
Last week: 6

11. Ohio State (2-3). Coming off of three-straight losses and heading into a Big Ten/ACC matchup against Virginia, the Buckeyes are talented but young. Marc Loving and JaeSean Tate have been great, but Ohio State needs the 3s to fall to help open up driving lanes on the offensive end. With the point guard position being a work in progress, balance and toughness will carry the load until Matta?s bunch reaches its true potential.
Last week: 8

12. Minnesota (4-2). Joey King, Carlos Morris, Nate Mason and Charles Buggs make up a solid four. The problem lies with what comes behind the Gophers? top four, as depth is a major issue for Richard Pitino. Pitino and staff have a solid recruiting class for 2016-17, however the key will be to gain momentum and excitement for basketball in Minneapolis.
Last week: 13

13. Penn State (3-2). Penn State has the talent to slide up into the 10-spot in the Big Ten, but it has yet to find the balance to be able to play inside-out basketball. At this point, it seems to be living and dying by the 3-pointer. Similar to Minnesota, Pat Chambers has a tremendous recruiting class coming to campus in the fall of 2016, but the key will be to establish a winning culture for the high level talent to step into when they arrive. Shep Garner and Brandon Taylor will have to carry the offensive load as the supporting cast continues to develop.
Last week: 12

14. Rutgers (3-3). Eddie Jordan has much better talent on campus than the Scarlet Knights have had in years. With five players averaging in double figures the key will be to create a competitive culture and play each game with a chip on their shoulder and something to prove. Keeping the energy up and maintaining a positive outlook will be one of the biggest challenges for Jordan and his staff this season.
Last week: 14