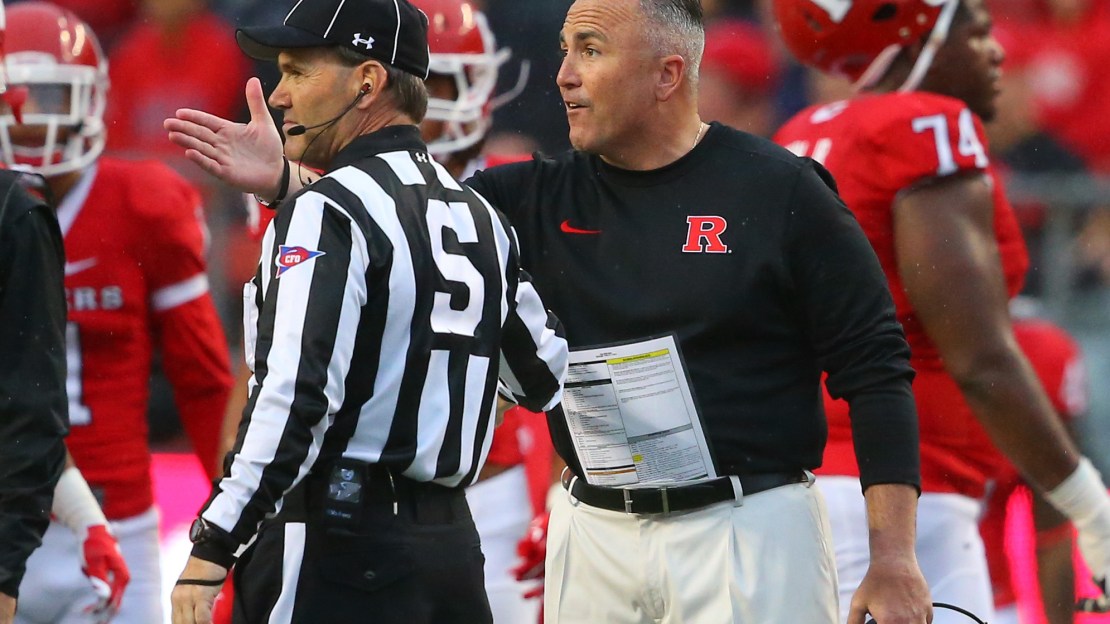 In a move that wasn?t all that shocking, Rutgers fired athletic director Julie Hermann and football coach Kyle Flood on Sunday.

Arrests and suspensions of players, allegations of drug use and sub-par play all played a part in the epic fall out at Rutgers that claimed the A.D. and coach at a school that is struggling to gain traction.

A school report is expected to detail allegations that could result in NCAA infractions and possible sanctions, multiple people familiar with the situation have told NJ Advance Media.

So, Hermann-a dubious hire to begin with–is out after a rocky two-and-half year tenure, while Flood is gone after four seasons on the job. He leaves with a 26-23 mark, taking the Scarlet Knights to three bowls in a row before missing the postseason with a 4-8 mark in 2015.

Whatever the plan is to replace Flood, Rutgers needs to act quickly.

"The search for a new Head Football Coach will begin immediately and will be led by Pat Hobbs, with input from Greg Brown, Ken Schmidt, and me," Rutgers president Robert Barchi said in a statement. "We all believe that Rutgers football can be competitive in the Big Ten Conference and we will find the right coach who can get us to that place."

Rutgers remains a work in progress as it continues to transition to the Big Ten. Flood, 44, took over for highly successful Greg Schiano in 2012. After Schiano bolted to coach the Tampa Bay Buccaneers, Flood was promoted from Schiano?s staff-which he joined in 2005–but was unable to build on what Schiano started in 2001 and continued for 11 seasons.

Flood took the Scarlet Knights to bowls in each of his first three seasons, going 8-5 with a victory over Michigan and a bowl win during Rutgers? inaugural Big Ten run in 2014.

Flood?s 2015 season was cloaked in controversy. He came under scrutiny before the season began for an email he sent to a faculty member inquiring about a member of his team. Coaches had been told not to directly contact faculty concerning academic matters. After an investigation, Flood subsequently was suspended for three games. Things went downhill from there.

"Kyle Flood has been a loyal and dedicated member of our community for more than a decade and our head football coach for four seasons, during which his teams won 26 games and played in three bowl games," Barchi said. However, our continued struggles on the field combined with several off the field issues have convinced me that we need new leadership of our football program."

Flood?s program saw a spat of player arrests in 2015. Six players were booted off the squad in a two-week span following arrests. Among those in trouble was the team?s most high-profile player, wideout Leonte Carroo, who dealt with an arrest and suspension. Add it all up, and it wasn?t been a smooth season for Rutgers, which capped 2015 with a dubious 46-41 home loss to Maryland in which the Scarlet Knights blew a 31-13 halftime lead.

One thing's for sure: The next AD needs to hit a home run with this hire, as the Scarlet Knights look to get a foothold in a rugged Big Ten East that features heavyweights like Michigan State and Ohio State and rising programs in Michigan and Penn State.

While the next coach will face challenges navigating a rugged Big Ten East, he won?t inherit a team void of talent. The Scarlet Knights have playmakers in QB Chris Laviano, RBs Josh Hicks and Robert Martin, WRs Janarion Grant and Andre Patton, DT Darius Hamilton and LB Steve Longa, among others, who have eligibility remaining.