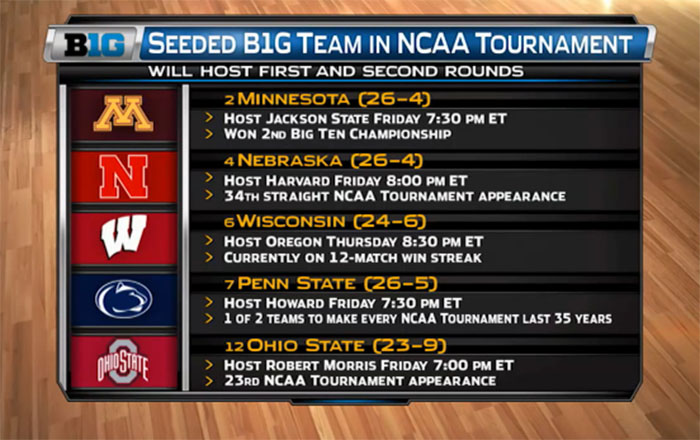 Nine Big Ten teams have been selected to the 2015 NCAA Volleyball Tournament, it was announced Sunday night.

Big Ten champion Minnesota enters the tournament as the No. 2 overall seed, while No. 4 Nebraska, No. 6 Wisconsin, No. 7 Penn State and No. 12 Ohio State also earned top-16 seeds. Illinois, Michigan, Michigan State and Purdue also received at-large bids to the national tournament.

The Big Ten's nine teams are more than any other conference, as the Pac-12 and Big 12 have seven and five, respectively.

After winning its second Big Ten Championship, Minnesota will take on Jackson State on Friday at 7:30 p.m. ET in the first round of the Des Moines Regional. With a win, the Golden Gophers would face the winner of the Marquette-Northern Iowa match. Minnesota will be making its 20th NCAA Tournament appearance.

The No. 2 seeded #Gophers will host Jackson State in the First Round of the @NCAAVolleyball Tournament. pic.twitter.com/StJu0bfV0D

Nebraska will compete in the Lexington Regional. The Cornhuskers are making their 34th consecutive trip to the NCAA Tournament and will host Harvard at 8 p.m. ET on Friday. If Nebraska advances, it would meet Kansas State or Wichita State in the second round.

There Is No Place Like Nebraska! Always an honor to open the @NCAAVolleyball Tournament in front of our fans! #GBR pic.twitter.com/pWw7cLwIKu

Wisconsin will entertain Oregon at 8:30 p.m. ET on Thursday. With a first-round win, the Badgers would face Iowa State or Miami (Fla.) in the second round of the Austin Regional. Wisconsin is making its 19th appearance in the national tournament.

No. 6 seed for #Badgers ties for second-best seed since seeding started in 2000 - behind last year's No. 4 seed.

Defending national champion Penn State enters its 35th consecutive NCAA Tournament, and will host Howard on Friday at 7:30 p.m. in the Des Moines Regional. The winner of the match will advance to the second round, and take on Dayton or Villanova.

#PSUVB earns the No. 7 seed in the upcoming 2015 NCAA Tournament! #WeAre

Ohio State enters its 23rd NCAA Tournament and will host Robert Morris on Friday at 7 p.m. ET in the first round of the Lexington Regional. With a win, the Buckeyes would face the winner of the American-Kentucky match.

Ohio State is the No. 12 overall seed and will HOST first and second round matches!!!

Illinois is making its 23rd NCAA Tournament appearance, and will travel to Louisville, Ky., to face Southern Illinois at 5 p.m. ET on Friday in the first round. With a win, Illinois would face either Belmont or Louisville in the second round.

We're going dancing! #Illini vs. @SIU_Volleyball on Friday in Louisville at 4 CT! pic.twitter.com/2LHVkLJUNd

Michigan, making its 15th trip to the NCAA Tournament, will head to Los Angeles to take on Santa Clara in the first-round on Friday at 8:30 p.m. ET. If Michigan advances, it would face the winner of the Lipscomb vs. UCLA match.

We'll play Santa Clara at UCLA on Friday in the first round of the NCAA Regional! #goblue pic.twitter.com/omLe6zH5ul

Michigan State travels to Seattle for its first-round match in the Lexington Regional against Arkansas State on Friday at 8 p.m. ET. Michigan State, which is making its 18th NCAA Tournament appearance, would advance to play Denver or Washington with a first-round win.

The Spartans are headed to the left coast! MSU vs Arkansas State on Friday.
Details: https://t.co/WZnLnBgVDt pic.twitter.com/ZdCNBzVr4i

Purdue received a bid to the NCAA Tournament for the 17th time and will face SMU in the opening round of the Austin Regional in Austin, Texas on Thursday at 5:30 p.m. ET. If Purdue wins, the Boilermakers would face either Fairfield or Texas in the second round.

First- and second-round matches will take place on campus sites on Thursday, Friday and Saturday, while the regional round will be played at one of four sites on Dec. 11 and 12. Regional winners will advance to Omaha, Neb., to compete in the national semifinals on Dec. 17, with the national championship match set for Dec. 19.