Dienhart: So much to like about this Big Ten title game matchup 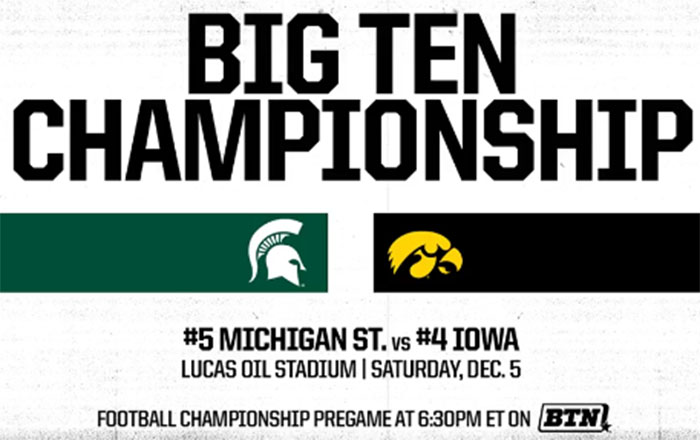 The Big Ten title game matchup is set: Iowa vs. Michigan State. The stakes: A spot in the second annual College Football Playoff.

Last week, 12-0 Iowa ranked No. 4 in the College Football Playoff, while 11-1 Michigan State was No. 5. Each should maintain its spot, at worst, in next week?s poll, which will come out Tuesday.

In one corner will be the unbeaten Hawkeyes, a Cinderella story riding a 12-0 record to Indianapolis for its first appearance in the league title game. Back in August, no one was picking the Hawkeyes to win the Big Ten West. That honor typically went to Wisconsin, with Nebraska getting some nods. But Iowa shocked the world by taking the division with a gritty squad built on a physical offense and rugged defense wrapped around a blue-collar attitude.

?(Fans) for the first time to be able to say 12-0, chanting that is just fantastic,? said Iowa boss Kirk Ferentz after the 28-20 win at Nebraska on Friday. ?I appreciate them being here and I know we'll see them in Indianapolis next week on top of it. All-in-all just a really special day and a really special achievement for our players. They deserved all of the good things that certainly came their way."

In the other corner are the Spartans, one of the nation?s premier programs that has won at least 11 games five times in the last six seasons and will take part in their third Big Ten title game. Like Iowa, Michigan State wasn?t the pick of pundits to win its division. Instead, Ohio State was tabbed by the experts. Why not? The Buckeyes were coming off a memorable run to the national title and had most of their key players back. But it was Michigan State taking home the pennant, highlighted by a 17-14 victory at Ohio State last week that put the Spartans in the driver?s seat.

"This is what we have sort of shot for, to win the East," MSU coach Mark Dantonio said. "This was our first goal. We just sort of willed our way to it.

"Just so happy, going back to Indy. Step one, accomplished."

The Spartans sealed up the East Division crown with a convincing 55-16 victory vs. Penn State. Michigan State?s lone blemish in an 11-1 season was a bizarre 39-38 defeat at Nebraska that included a controversial decisive touchdown.

Iowa secured the West title last week with a home win vs. Purdue. But the Hawkeyes needed to dump Nebraska to remain perfect and in contention for a playoff spot and set up a playoff showdown next Saturday in Lucas Oil Stadium. Mission accomplished with a 28-20 victory that wasn?t a thing of beauty-which has been a theme for Iowa all season.

"We're not trying to be pretty, we are just trying to be productive,? said Ferentz. ?That has been our goal from day one. Football is not gymnastics. Gymnastics is a very demanding sport, an outstanding sport. Here it's about having a little more point than your opponent. I'm trying to do it, day after day, week after week. That's a challenge. These guys were 12-for-12, you can't do anything better than that."

Now, Michigan State and Iowa meet for the first time since 2013, when the Spartans took a 26-14 win in Iowa City. Ferentz and Dantonio has met seven times, with Ferentz holding a 4-3 edge. These are two of the Big Ten?s best coaches. And, they also happen to be two of the longest-tenured coaches in the league, with Ferentz in his 17th season and Dantonio in his ninth.

"It's a credit to their chemistry, their leadership, their play-making ability," Dantonio said of this team's achievement. "The crowd was great. Everybody goes home the East champion. Not just our players, the fans too.

"I think we're playing our best football down the stretch. If you look at us and compare us with last year's Big Ten Champion, that's what they were able to do.

"We have good energy. We play a good Iowa team that has the same kind of energy. They have won their way to the top. We have had great games with Iowa over the past years and I'm sure this will be one of them."

This is going to be a lot of fun. And, maybe the most anticipated Big Ten title game yet in the five-year history of the event.