Dienhart: Hawkeyes' dream season lives on for another week 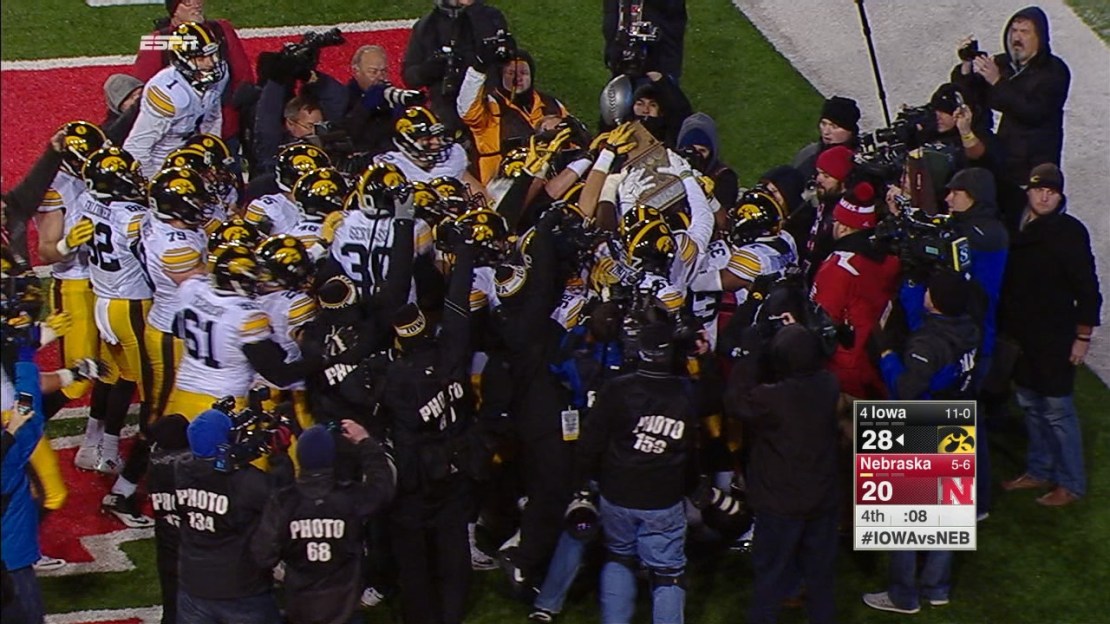 The dream lives for another week for Iowa.

[ MORE: Catch up on all our Week 13 Big Ten football games ]

The Hawkeyes? 28-20 win at Nebraska moved Iowa to 12-0 for the first time in program history. Even better, the East Division champs will arrive in Indianapolis one win from a likely spot in the College Football Playoff. Not bad for a team coming off a 7-6 season that was universally picked to finish in the middle of the pack in the Big Ten West.

Iowa entered the week No. 4 in the College Football Playoff rankings, behind No. 1 Clemson, No. 2 Alabama and No. 3 Oklahoma. No matter what happens on Saturday around the nation, it?s difficult to envision Iowa falling from a top-four spot.

Who will Iowa play in Indianapolis next Saturday? Michigan State is in the driver?s seat. Beat visiting Penn State tomorrow, and the 10-1 Spartans-No. 5 in last week?s CFP poll–will play the Hawkeyes in Lucas Oil Stadium in what essentially will be a College Football Playoff play-in game. Perfect.

Is Iowa?s resume impressive? Not overly. The Hawkeyes? best wins: at Wisconsin and vs. Northwestern. Of the top four teams in last week?s CFP poll, Iowa?s strength of the schedule was 68th. Clemson?s was 32nd, Alabama?s sixth and Oklahoma?s 35th. In fact, you have to go down to team No. 15, Navy, to find another squad with a worse strength of schedule: 90th.

Regardless, Iowa is 12-0 and poised to crash the playoff party in what has been one of the most surprising seasons in recent Big Ten history.

Today?s win at Nebraska was a classic example of ?Iowa football.? It wasn?t pretty or dominating ? but it was effective. The Hawkeyes were outgained, 433-250. But Iowa won the battle on the ground, 153-137, and they committed one turnover to Nebraska?s four. Hawkeyes RB Jordan Canzeri ran 17 times for 140 yards and two touchdowns. That compensated for Iowa QB C.J. Beathard hitting just 9-of-16 passes for 97 yards with a TD and the Hawkeyes going 0-for-9 on third downs.

Nebraska is left to wonder what went wrong in a truly bizarre debut season for Mike Riley that saw the Cornhuskers lose myriad close games. Nebraska is 5-7. That?s its reality a season after firing Bo Pelini, who won nine games in each of his seven seasons.

#Iowa sets a school record with 12 wins this season. Meanwhile, #Nebraska loses 7 games in a season for the 1st time since 2007. #IOWAvsNEB

The Huskers, who started 3-6 under Riley, had their third losing season since 2004 and lost four times at home for the first time since 1961. Will the Huskers accept a bowl bid if they are extended one? The last time Nebraska didn?t go to a bowl was 2007.

While Nebraska is left to deal with that reality, Iowa is dreaming big. Really big.