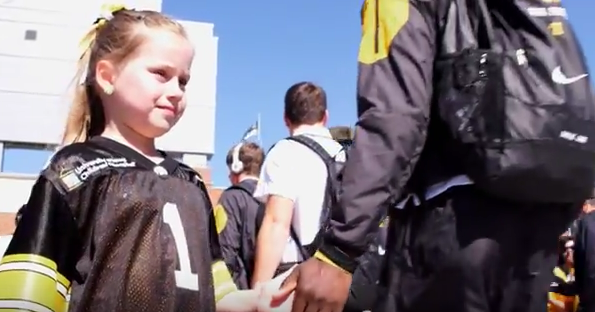 You wouldn't expect a mountain of a man - strapped into football hardware and ready to take on a rival - to look to a little girl for motivation. But this is no ordinary little girl. She's Laila Walton, and she's a Hawkeye Kid Captain.

In 2014, Laila was diagnosed with hypokalemic periodic paralysis, a rare condition that results in episodes of severe migraines, vomiting and weakness. Her parents sought treatment for her at the University of Iowa Children's Hospital.

"On the counters, you see the posters of the kids that have been Kid Captains," Christine said. "So I applied ? I had to write a letter, which was very difficult to get through because I had to go over Laila's whole medical struggle."

[btn-post-package]After being selected from hundreds of applicants, Laila recently went through the sort of experience most Hawkeye fans can only dream about. In addition to being a featured captain at a game and getting to toss the pigskin on the field with team members, she received her own personalized jersey and cards highlighting her stats, like her favorite activities and color. She even had a little one-on-one time with Iowa head coach Kirk Ferentz, who's been a supporter from the beginning of the program.

"It just puts it all in perspective," said Ferentz of the Kid Captains. "When you think about the positive attitude, the courage that they show, that their families show, it's really inspiring. To have a chance to maybe share a little joy in someone else's life, that's a good thing."

For Laila, the benefits of the program are a bit simpler.

"The best part of being a Kid Captain is you get to go on the field and go to a game," she said.