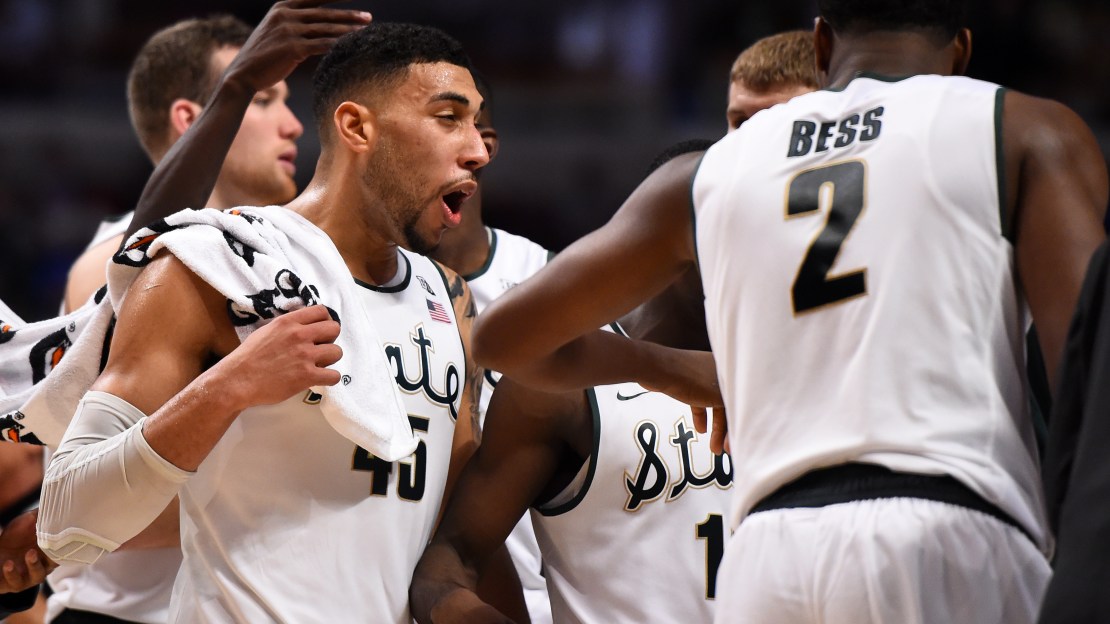 Maryland is still No. 1, but there's a new No. 2 in my latest Big Ten Power Rankings, presented by ArcelorMittal.

And that team is Michigan State, fresh off an impressive week that included a comeback victory over then-No. 4 Kansas, thanks in large part to Denzel Valentine's silly triple-double (29 points, 12 rebounds, 12 assists).

There's more change, too, with undefeated Iowa moving into the top 5. See my latest list below.

1. Maryland (3-0). Maryland will continue to remain at the top of the Big Ten Power Rankings until someone can knock it off. They have the makeup of a national championship team. The depth in the front court with Diamond Stone, Robert Carter, Michal Cekovsky and Damonte Dodd will help them grind out tough games in Big Ten play.
Last week: 1

T-3. Indiana (3-0). The Hoosiers are one of the most exciting Big Ten teams to watch in the last decade. They play fast, they score a lot of points, and the combination of Max Bielfeldt and Thomas Bryant may be just enough of a post presence to make them a serious contender.
Last week: 2

T-3. Purdue (5-0). Purdue continues to show how complete of a team it is with great balance and post dominance. After missing the first two games, star big man A.J. Hammons is back, and he obviously makes the Boilermakers even better.
Last week: 3

5. Iowa (3-0). The Hawkeyes have a big test this week as they travel to Orlando to face the Dayton Flyers. So far, Iowa is quietly putting up 89.3 points per game and had a big statement win on the road at Marquette, which leads me to believe that the experience is winning out and creating an atmosphere for the youth to develop. Fran McCaffery, who picked up his 350th career win at Marquette, is a great coach too.
Last week: 7

6. Wisconsin (3-2). I?m not counting Bo Ryan or this team out yet. Especially with Bronson Koenig at the helm. The Badgers have shown significant signs of improvement since the loss to Western Illinois. The offense and defense will continue to improve as the new components gain in-game experience. As the offense finds rhythm and spacing improves, expect to see Nigel Hayes emerge as the star that he is capable of being.
Last week: 5

7. Michigan (2-1). There is no doubt that there is high-level talent in Ann Arbor. Caris LeVert is a lottery pick, in my opinion, and has a similar skill-set to Andrew Wiggins. Following a tough loss to Xavier, the Wolverines have to show us that they can be tough and fight back. UConn will be a great test to see how this team bounces back after being physically pushed around.
Last week: 9

8. Ohio State (2-1). I?ve seen a lot of good and then some bad from Ohio State. They executed well offensively against Grambling yet failed to do so against Texas-Arlington. There is going to be some growing pains as this is a very young team and replacing D?Angelo Russell is no easy task. Ohio State will grow exponentially prior to the start of conference play, still having to face Memphis, Virginia, UConn and Kentucky before the end of 2015.
Last week: 10

9. Nebraska (3-1). Toss out the Villanova game, and this team would scare me if I were a Big Ten foe. Nova was a tough matchup for the Huskers and will (later) prove to be a great learning experience for this young bunch. This team plays hard and Tim Miles does a great job getting them to buy into things like ?Tougherness.? It's not a typo; it's a combination of togetherness and toughness. Andrew White and Shavon Shields are stars in this league and Glynn Watson will be averaging 13-15 points per game by the end of the season.
Last week: 12

10. Northwestern (3-0). The loss of Vic Law for the rest of the season certainly hurts the Wildcats, but good teams respond well to adversity. Chris Collins and staff have one of the most talented Northwestern teams we?ve ever seen and the scoring with Bryant McIntosh, Tre Demps and the sharp-shooting Aaron Falzon can come in bunches. This team needs to continue to develop on the defensive end in order to make it to their first NCAA tournament.
Last week: 8

11. Illinois (1-3). The Illini have no business being below the 7-spot, but at 1-3 and trailing at the half of each of their four games, there?s work to be done in Champaign. Granted, the Illini have continued to struggle with injuries, as Kendrick Nunn and Jaylon Tate have been sidelined to start the season. Malcolm Hill and Mike Thorne Jr. are skilled enough to keep this team on track.
Last week: 6

12. Penn State (2-1). Penn State has talent and multiple good shooters, which should allow the Nittany Lions to play with better spacing and get easier shots around the basket. The problem is that they have begun to live and die by the 3. Shep Garner is a true talent and has the ability to make teammates better and score in the process. Pat Chambers will need Garner and Brandon Taylor to carry the load as this team continues to evolve and develop without D.J. Newbill.
Last week: 11

13. Minnesota (3-2). This appears to be a true rebuilding year for Richard Pitino, and I am still trying to figure out what the true identity of this team will be. Joey King, Nate Mason and Charles Buggs need to step up as leaders and get the supporting cast to buy-in to the process of continuing to improve regardless of the hiccups along the way. This team will win some tough games and may struggle at times. It?s all a part of the process.
Last week: 13

14. Rutgers (3-1). Eddie Jordan has a good amount of young talent on campus, but youth usually needs to be molded. The process of development for this team and for Eddie Jordan goes well-beyond what we see on the court. It begins with creating a competitive and exciting culture around the basketball program at Rutgers. This is often the most overlooked part of a coach?s job. This is a multi-year process but the goal along the way is to find ways to compete.
Last week: 14