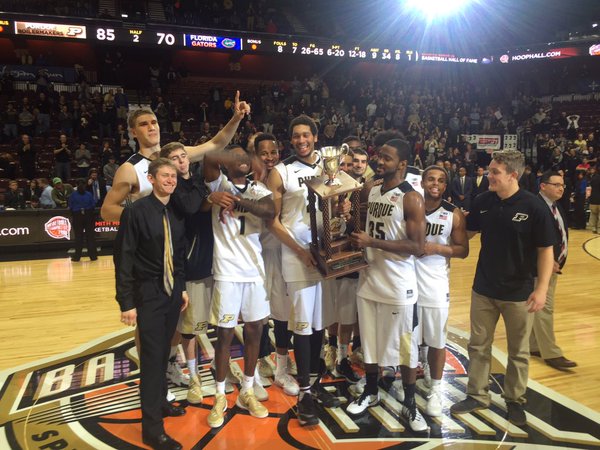 The Boilermakers (5-0) led most of the way and used a 15-2 second-half run to separate themselves, sending the Gators (3-1) their first loss under new coach Mike White.

Purdue shot 50 percent from the floor and made 11 of 26 shots from behind the arc. The Boilermakers are 5-0 for the fifth time in Matt Painter's 11 years as coach.

Florida had been outrebounding opponents by more than 16 per game, but lost that battle 43-34.

It was a game of runs.

Edwards scored five points during an 8-0 spurt that stretched a 45-42 lead to 11 early in the second half.

The Gators got back within three during a 7-0 run sparked when Egbunu fought Thompson for a loose ball and the pair went rolling across the floor attached to it. Florida got the turnover and eventually cut a 59-49 deficit to 59-56.

Dakota Mathias tied it at 63 with a long 3-pointer for Purdue, starting a 12-0 run. The Boilermakers were not challenged again.

Florida went right after Purdue's big men, outscoring Purdue 22-12 in the paint in the first half and forcing Purdue's two 7-footers, Haas and A.J. Hammons, into two early fouls.

Finney-Smith hit his first five shots from the floor and had 13 first-half points. Egbunu added 11 points and five rebounds. Finney-Smith hit a 3-pointer that cut the lead to 35-34 and the Gators took a brief 38-37 lead on a driving basket by KeVaughn Allen.

But the Boilermaker went on a 6-0 to over the final minute of the first half lead by five at the break.

NOTES: Purdue had not won an in-season tournament since the 2009 Paradise Jam. This was the first tournament title game for Purdue since it lost to Alabama in the 65-56 in the final of the 2011 Puerto Rico Tip-Off Tournament. The Boilermakers went 22-13 that year and played in the second round of the NCAA Tournament.