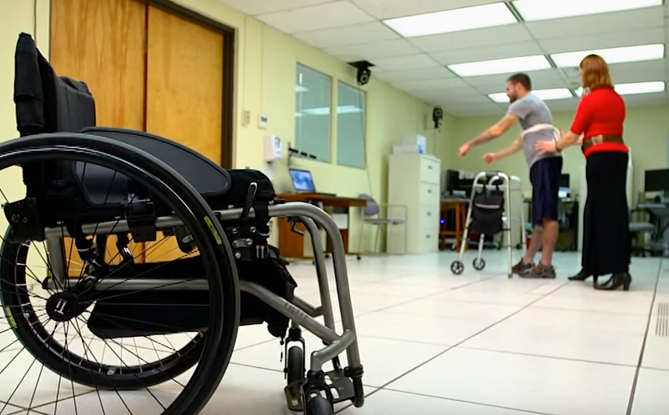 Brad Burns is a fierce competitor. Growing up, he gravitated toward sports that had lots of physical contact and intensity.

?In high school, I was a football and ice hockey player,? he said. ?I liked the idea of the physical exercise, the competition, being able to be across from somebody and hitting. To me it was always a release ? just being able to be aggressive.?

But a horrific automobile accident more than seven years ago threatened to take two important things away from Burns: His ability to move and his competitive spirit. And getting either of those back seemed like a long shot.

?I had gone to school to be an EMT [emergency medical technician] right before I got hurt, so I remember when the doctors came in and told me I was a C5 - at the time diagnosed as C5 complete fracture - I already ? had a little bit of an idea what that was,? Burns said. ?I was told that I would eventually get some of my left bicep back, but then nothing on the right side.

?I remember thinking, Man, I wish I could just push a wheelchair,? he added. ?It wasn?t about walking, it wasn?t anything else, I just wanted to be able to at least use a chair. The first month of dealing with that was just depression.?

Fortunately for Burns, he received treatment at Ohio State?s Wexner Medical Center. It was there that he encountered Lise Worthen-Chaudhari, research assistant professor in physical medicine and rehabilitation, shortly after his accident.

Worthen-Chaudhari had recently created an experimental form of physical therapy that involved using basic motions of recovering patients to create digital pictures. The idea of using art as a means for physical rehabilitation came from her observation that existing exercises were not only difficult, but also not all that stimulating.

?I?m a dancer as well as a rehabilitation scientist,? she explained. ?In watching people performing their rehab, I thought, It looks really boring. Can?t we make it more interesting??

Burns was selected as a ?guinea pig? for Worthen-Chaudhari?s Embedded Arts therapy program. He admitted that he was skeptical at first.

?But then as soon as I started doing it and getting into it, it actually was kind of fun and a nice little workout,? he said. ?I actually ended up really enjoying it, which surprised me.?

[btn-post-package]And there were other surprises in store for Burns. Through the Embedded Arts program, he regained use of much of his body over time, and he recovered his will to push himself in athletic activity. And the pictures he produced in his rehab regimen were even featured in a gallery exhibition.