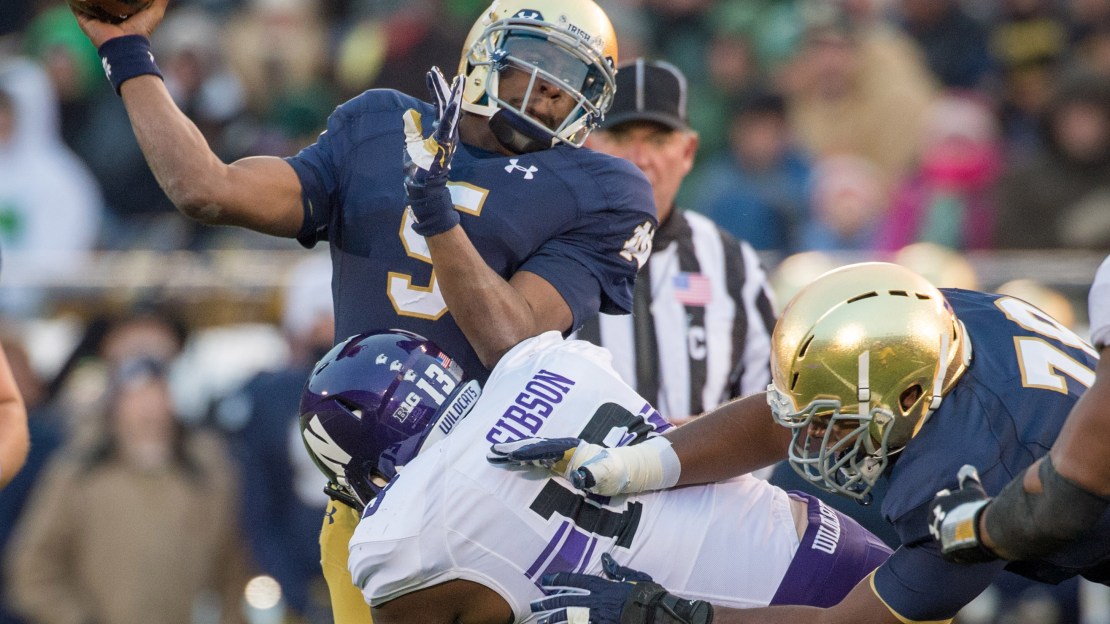 Survive and advance was the theme last weekend in Big Ten play. Michigan State lost Connor Cook to injury and proceeded to have a season-low 262 total yards of offense in a win against Maryland. Iowa escaped with a five-point victory against a pesky Minnesota squad. Northwestern needed a late touchdown by Justin Jackson, his first in two months, to beat Purdue by a touchdown. And Michigan needed a fourth down stop at the Hoosiers 2-yard line to squeak out an overtime triumph at Indiana.

Elsewhere, Ohio State remained unbeaten with a 25 point victory at Illinois and Nebraska picked up its second straight victory for the first time this season, moving a win away from bowl eligibility, with a road triumph at Rutgers.

We have a doubleheader of games this weekend on BTN beginning with Indiana making its first-ever trip to College Park to take on Maryland at noon, followed by Northwestern taking on Wisconsin at Camp Randall Stadium, with each team seeking their ninth victory of the season, at 3:30pm (all times ET).

With just two weekends of conference play remaining and 13 Big Ten teams in action, here are five facts to know when you tune into BTN this weekend.

Northwestern?s pass defense has been a big reason why they are 8-2 this season. The Wildcats have given up just five touchdowns through the air so far in 2015. That is tied with Michigan and Wisconsin for the fewest in the FBS. The last Big Ten team to lead the nation in fewest passing touchdowns allowed was Wisconsin in 2006 (tied with Virginia Tech at six). Northwestern?s opponents have averaged just 5.3 yards per passing attempt this season, the second-lowest mark of any FBS team (Marshall: 5.2). The Wildcats are one of four teams in the nation who have allowed just one passing play of 40-plus yards, joining Auburn, Missouri, and North Carolina.

Wisconsin fifth-year senior safety/wide receiver Tanner McEvoy continues to be a threat on both sides of the ball. He posted his first career multi-interception game with a pair of picks in the Badgers? last outing against Maryland on Nov. 7th. McEvoy now has five career interceptions; including a team-high four this season. His four picks are tied for the second-most in the conference: (Desmond King, Iowa - 8). In addition to his ability to defend the pass, he?s also been an offensive weapon. He has posted 107 yards on the ground on 13 carries with two touchdowns and another 52 yards through the air on five receptions. Against Rutgers on Oct. 31st, he recorded a sack, an interception and a rushing touchdown. He was the first FBS player to do that in a game since Utah?s Eric Weddle vs. Tulsa in the 2006 Armed Forces Bowl.

Indiana senior quarterback Nate Sudfeld is on the precipice of an elite milestone. He completed 20-of-34 passes for 220 yards and a touchdown in the loss against Michigan last weekend. With that performance, Sudfeld passed Steve Bradley (1983-85) for third on the all-time Hoosiers passing yardage list. He is now just 245 passing yards away from joining Antwaan Randle El (1998-01) and Ben Chappell (2007-10) as the third quarterback in Indiana history to throw for 7,000 yards in his career. Sudfeld has thrown for at least 300 yards on eight occasions during his career, the third-most among all active Big Ten quarterbacks (Connor Cook, MSU - 10, Christian Hackenberg, PSU - 9).

The turnover bug has really hurt Maryland this season. The Terrapins have thrown an FBS-high 28 interceptions; currently tied with Louisiana Tech (2000) and North Texas (2007) for the most by any team in the last 20 seasons. Their 35 giveaways are the most by any FBS team in 2015. It?s also the most by any Big Ten team in its first eight games of any season since at least 1996. They are currently on pace to finish with 42 turnovers for the season, which would be the most by an FBS team since Washington posted 42 in 2004.

The success stories of the ?walk-on? at Wisconsin continues to be played out this season by senior linebacker Joe Schobert. His numbers this season have been nothing short of astounding. Schobert is tied for ninth in the nation in tackles for loss (14.5), seventh in sacks (9.5), and tied for fifth in forced fumbles (4). In the Badgers last contest against Maryland, not only did he pick up yet another tackle for a loss, but he led the team in rushing after picking up 57 yards on a fake punt. Schobert was the first Big Ten linebacker to lead his team in rushing since Purdue?s Joe Odom had a 51-yard carry against Illinois on Nov. 3, 2001. All this from a former ?walk-on? who wasn?t heavily recruited out of high school. But that should come as no surprise to Badger fans. Schobert joins the ranks of other legendary Wisconsin players such as J.J. Watt, Jared Abbrederis, and Jim Leonhard, who also came to Madison as ?walk-ons.?