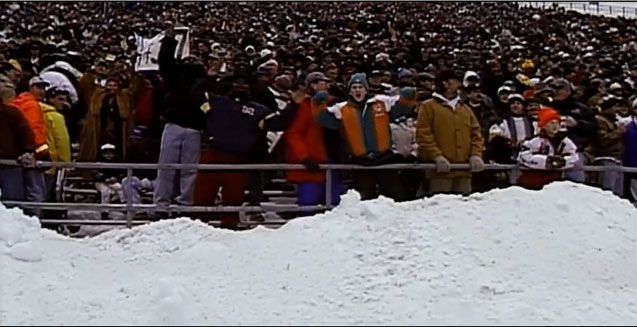 Go ahead, call Michigan QB Jake Rudock an ?old man.? He doesn?t care. In fact, he embraces the label.

Of course, as Mlive.com points out, Rudock doesn't carry himself like a normal college kid. Because he's not one. He graduated from Iowa earlier this year and is beginning preparation for medical school once his playing career comes to a close. In the meantime, he embraces the ?old man? tag.

Rudock's quarterbacks coach, Jedd Fisch, says it's often difficult to tell whether or not Rudock's 22 or 52, but her means that in a good way. His younger quarterback teammates nicknamed him "dad" shortly after he joined them this summer.

Meanwhile, Penn State will say ?good-bye? on Saturday to a small but impactful senior class led by DT Anthony Zettel and DE Carl Nassib. What coach wouldn?t love those guys? Exactly. And they have seen a lot during their stay in State College, Pa.

Well, Ohio State can?t take every stud player from the Buckeye State, which allows program like MSU and Iowa-among others-to swoop in and grab some really good players. Cleveland.com notes that every time Ohio State takes a kid from out of the state, that's indirectly making other teams in the conference better. Maybe Michigan State running back L.J. Scott will be the next Le'Veon Bell, a dominant force from Ohio who does big things with the Spartans.

I love Mike Hlas of the Cedar Rapids Gazette. So, when I saw he had the great Dennis Dodd of CBSSports.com on his podcast ? well, I had to link you up.

Rutgers has just two games left. And Dan Duggan of NJ.com takes a look at five players who could get extended playing time as the Scarlet Knights begin to turn the page toward 2016.

One is Isaiah Johnson, who figures to be the team?s starting middle linebacker next season when Kaiwan Lewis graduates. The guy could be pretty good. And, this RU defense needs to get better.

Hey, looky who played for the first time this season for Purdue: A.J. Hammons.

Hammons showcased all the reasons why he is so valuable after missing the first two games for still undetermined causes: Blocking three shots, snatching six rebounds and scoring eight points in only 15 minutes in Purdue's 96-61 victory over Incarnate Word.

"It felt pretty good just to get out there with the team," Hammons said. "The couple games I wasn't playing, I was still cheering my team on, but it just felt good to be back out there.

"It's a little different from practice, just playing each other. I knew I had to just get out there and I do what I know I can do. Block shots, rebound and try to get my position, get a couple scores here and there but just be out there supporting my team."

The news isn?t so good from Wisconsin on one of its big men, as freshman Andy Van Vliet was declared ineligible by the NCAA.

"There is no question he can do the work here," Bo Ryan said. "And he wasn't doing it to do anything other than improving his chances of being admitted to a school like ours.
"And you lose a year and sit a year because you're trying to get a better education? Doesn't make any sense."

The Badgers could have used this guy. On a side note, this is going to be an interesting year in Madison.

The great Loren Tate of the Champaign News-Gazette breaks down the end of Mike Thomas era. What next in Champaign for an athletic department with an interim A.D., an interim football coach along with a basketball program that faces a critical season?

The latest from Nebraska: Lincoln police say a decision on any charges in a reported rape at the home of some Cornhuskers could take weeks.