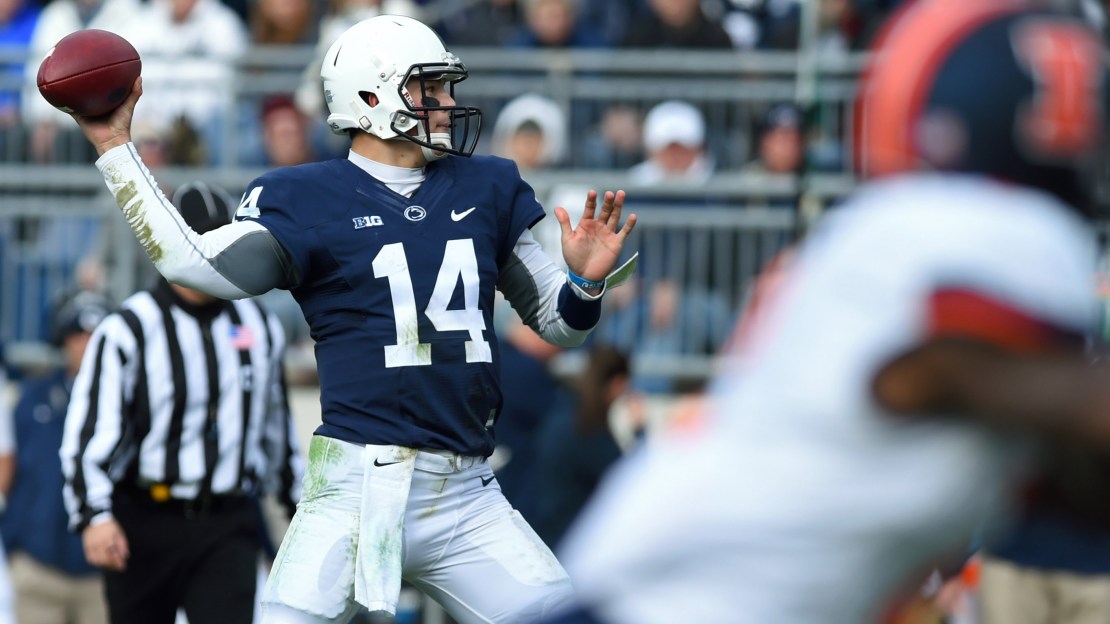 Could Saturday?s game vs. Michigan be Christian Hackenberg?s final appearance in Beaver Stadium? The Penn State QB isn?t thinking about that.

Greg Pickel of Pennlive.com says questions linger regarding whether or not Hackenberg will return to Penn State. But asked on Tuesday if he had considered that this game could be his last at home in a blue and white jersey, the junior stuck to the message he gave in August.

"Not really," Hackenberg said. "I'm just, again, focusing on it one week at a time, doing what I need to do to make sure I'm the most prepared I can [be] right now for these seniors to go out and play as well as I can, and make sure that as a team we're really rolling and doing what we need to do.

"It's a great challenge that we have this week against Michigan. They bring a lot of stuff to the table, so we're really excited about that."

I think Hackenberg should come back. He has been far from dominant and isn?t even the best QB in the Big Ten.

Remember when the nation was agog over Braxton Miller following the season-opening win at Virginia Tech? We were ready to hand him the Heisman. Well, Miller hasn?t exactly been dominating. But now would be a good time for the Buckeyes to use this deadly weapon effectively with the season about to amp up. Miller has 22 receptions for 321 yards and three TDs and has rushed 35 times for 218 yards and a TD.

Bill Landis of Cleveland.com says Miller hasn't been as consistently dynamic this season. With the understanding that Miller has set the bar high with his three seasons as quarterback, his season as receiver hasn't been nearly as productive or smooth as the Buckeyes portray it.

Dan Duggan of NJ.com is miffed by Kyle Flood?s refusal to change quarterbacks in what has become a lost season for Rutgers.

Duggan notes that college football is a bottom-line business. And the bottom line has been abysmal recently for Chris Laviano, who has completed 38-of-87 passes (43.7 percent) for 410 yards, no touchdowns and five interceptions during a four-game losing streak. Despite those struggles, Flood steadfastly has stood behind his first-year starter, not giving Hayden Rettig a shot.

Meanwhile, the calls for a quarterback change grow louder each week from the segment of the fan base that hasn't completely checked out on this season. I agree. Why not take a look at Rettig? What does RU have to lose? See what the LSU transfer can do.

Jim Harbaugh remembered Bo Schembechler on the anniversary of his passing.

Michigan's legendary former coach, died nine years ago Tuesday, Nov. 17. He died of heart disease on the eve of Michigan's No. 1 vs. No. 2 battle with archrival Ohio State in 2006. It was an unforgettable time that I never will forget.

"Coach Schembechler's a daily source of inspiration and remains that for me and all the people he coached or was associated with," Harbaugh said Tuesday on the Big Ten coaches teleconference. "Today's a special day in remembering coach Schembechler."

Big game for Wisconsin this week with Northwestern visiting. The Badgers still have life in the Big Ten West. But if they lose-or if Iowa beats visiting Purdue-the division will belong to the Hawkeyes for the first time.

How lucky is Northwestern and its 8-2 record?

The bottom line is this: NU hasn?t been as good as its 8-2 record would suggest. No need to apologize for that. This is a resourceful Wildcat team that wins with defense and a strong rushing attack.

Luck? This comes to mind for me: The harder NU works, the luckier it gets. Funny how that works in life.

Given the fact Iowa is off to an historic 10-0 start and it?s Senior Day, it?s a bit surprising to see that 9,000 tickets remain for this Saturday?s finale vs. Purdue.

Mark Dantonio is tired of hearing about the Michigan-Ohio State rivalry. Please tell me you aren?t surprised.

Well, until the Spartans win another national title, the Wolverine-Buckeye rivalry will remain a pretty big deal.

How about those Maryland Terrapins?! Nice win early in the season for a hoops team that many, including myself, think is the best in the Big Ten.

No doubt, Maryland fans are glad Rasheed Sulaimon is on their side after transferring from Duke. He had a nice game vs. Georgetown and is gonna make this a tough team to beat this winter.