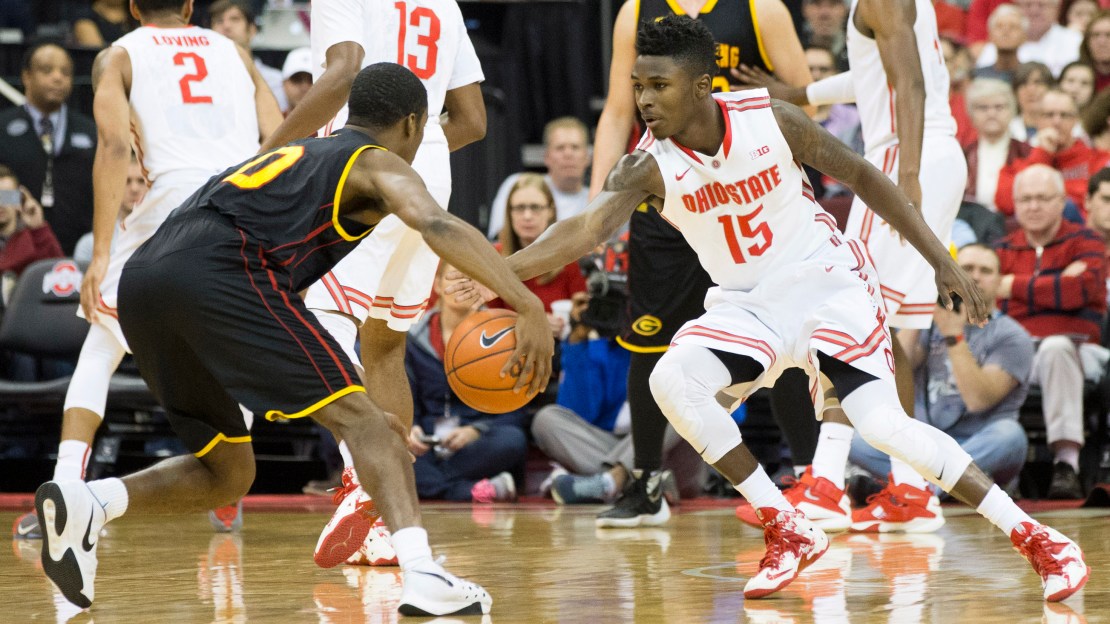 There were six Big Ten men's basketball games on the docket Tuesday night.

No. 13 Michigan State rallied past No. 4 Kansas, 79-73, behind Denzel Valentine's triple-double (29 points, 12 rebounds, 12 assists) in the Champions Classic at the United Center

The inaugural Gavitt Tipoff Games also got underway Tuesday, with Penn State defeating DePaul, No. 11 Villanova handling Nebraska, and No. 3 Maryland dropping Georgetown to give the Big Ten an early 2-1 advantage in the series that continues through Friday night.

Catch up on all of the action below:

PENN STATE 68, DEPAUL 62: BOX | PBP | AP RECAP
Brandon Taylor scored 19 of his 22 points in the second half and Penn State beat DePaul 68-62 in the Gavitt Tipoff Series on Tuesday.

ICYMI: @PennStateMBB's Jordan Dickerson with the block, and Josh Reaves with the dunk. https://t.co/Oapye6zGoN

OHIO STATE 82, GRAMBLING STATE 55: BOX | PBP | AP RECAP
Kam Williams scored 22 points as Ohio State coasted past Grambling on Tuesday night. The Buckeyes (2-0) used a 14-0 run to open up a 31-11 lead a little more than 12 minutes into the first half and never looked back.

Nigel Hayes calls for the clear-out, and he does the rest for @BadgerMBB. https://t.co/hGu4zxKb2A

MARYLAND 75, GEORGETOWN 71: BOX | PBP | AP RECAP
Rasheed Sulaimon hit a 3-pointer with 1:18 left to break a tie, and No. 3 Maryland got 24 points from Melo Trimble in a rousing 75-71 victory over neighborhood rival Georgetown on Tuesday night.

MICHIGAN STATE 79, KANSAS 73: BOX | PBP | AP RECAP
Denzel Valentine had 29 points, 12 rebounds and 12 assists and the senior guard took over the game for No. 13 Michigan State in the second half as the Spartans beat No. 4 Kansas 79-73 at the Champions Classic on Tuesday night at United Center.