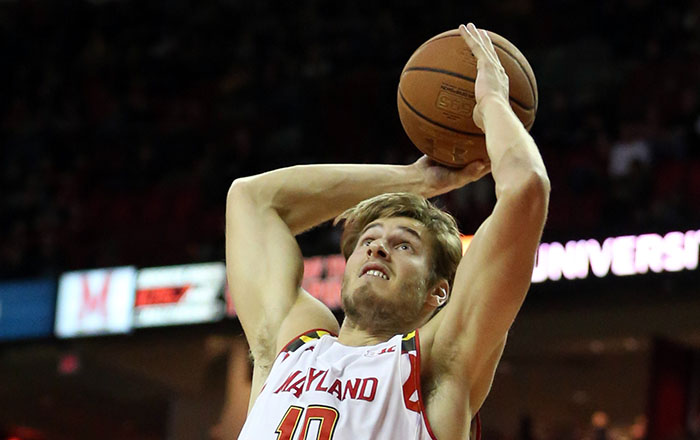 One week is in the books, meaning it's time to take a look at my updated Big Ten Player Rankings.

My top two players remain the same, however there's a bit of change among the rest of the top 10, including Illinois' Mike Thorne Jr. and Purdue's Caleb Swanigan debuting.

1. Melo Trimble, Maryland. Trimble was in total command as No. 3 Maryland blew out Mount St. Mary?s in the Big Ten preseason favorite's opener. He scored 14 points, on 6 of 11 from the field, and, most importantly, committed only one turnover in 25 minutes.
Preseason rank: 1

2. Denzel Valentine, Michigan State. I told you Valentine would be a constant triple-double threat, and he didn?t disappoint in Michigan State's opener. The most versatile guard in the Big Ten finished with 13 points, nine assists, and eight rebounds as the Spartans rolled. He will have to play like an All-American if Michigan State hopes to upset Kansas on Tuesday night.
Preseason rank: 2

3. Caris LeVert, Michigan. Is there anyone hungrier to reestablish himself than LeVert? After sitting out most of last season with an injury, LeVert proved why he is a player of the year candidate with 18 points, five assists, four rebounds, and two steals in a blowout over Northern Michigan.
Preseason rank: 4

4. Nigel Hayes, Wisconsin. It was a rough weekend for Hayes and Wisconsin. After helping Wisconsin raise its 2015 Final Four banner, Hayes got off to an All-Big Ten start by scoring 17 first-half points vs. Western Illinois. In the second half, he was held scoreless and Wisconsin was shocked 69-67 by the Leathernecks. The Badgers played much better in a win against Siena, but Hayes played only five first-half minutes due to foul trouble.
Preseason rank: 3

5. Yogi Ferrell, Indiana. Ferrell toyed with the guards from Eastern Illinois on his way to 13 points, six assists and seven rebounds. The Hoosiers, as expected, rolled 88-49.
Preseason rank: 5

6. Jake Layman, Maryland. Layman was strong and explosive in Maryland?s win against Mount St. Mary?s, scoring 16 points and pulling down five rebounds. He looks like he spent as much time in the weight room this offseason as in the gym.
Preseason rank: 7

7. James Blackmon Jr., Indiana. Blackmon picked right up where he left off last season, hitting three 3?s on his way to 17 points. He also pulled down seven boards and attacked the rim with confidence.
Preseason rank: 8

8. Mike Thorne Jr., Illinois. No Big Ten transfer or newcomer has had a bigger impact early in the season than the Charlotte transfer. The 6-foot-11 center had a monster debut for the Fighting Illini, scoring 25 points and pulling down 14 rebounds in a loss to a veteran North Florida squad. In a comeback win over North Dakota St., Thorne Jr. scored 21 points and pulled down eight rebounds.
Preseason rank: NR

9. Jarrod Uthoff, Iowa. With all of the hype surrounding Grapple on the Gridiron and Iowa football?s 10-0 start, the Iowa basketball team quietly started the season 2-0. Uthoff was aggressive early in both wins, averaging 17 points, 6.5 rebounds and 2.5 blocks.
Preseason rank: 9

10. Caleb Swanigan, Purdue. Swanigan was a monster recruit for Matt Painter, and he was a monster in his first two games, both wins. With A.J. Hammons out of action, the 6-foot-9 freshman compiled a pair of double-doubles, averaging  12.5 points and 12 rebounds en route to winning Big Ten Freshman of the Week. The last Big Ten freshman to open a career with back-to-back double-doubles, while also averaging two assists? It was Ohio State's Jared Sullinger, in 2010.
Preseason rank: NR