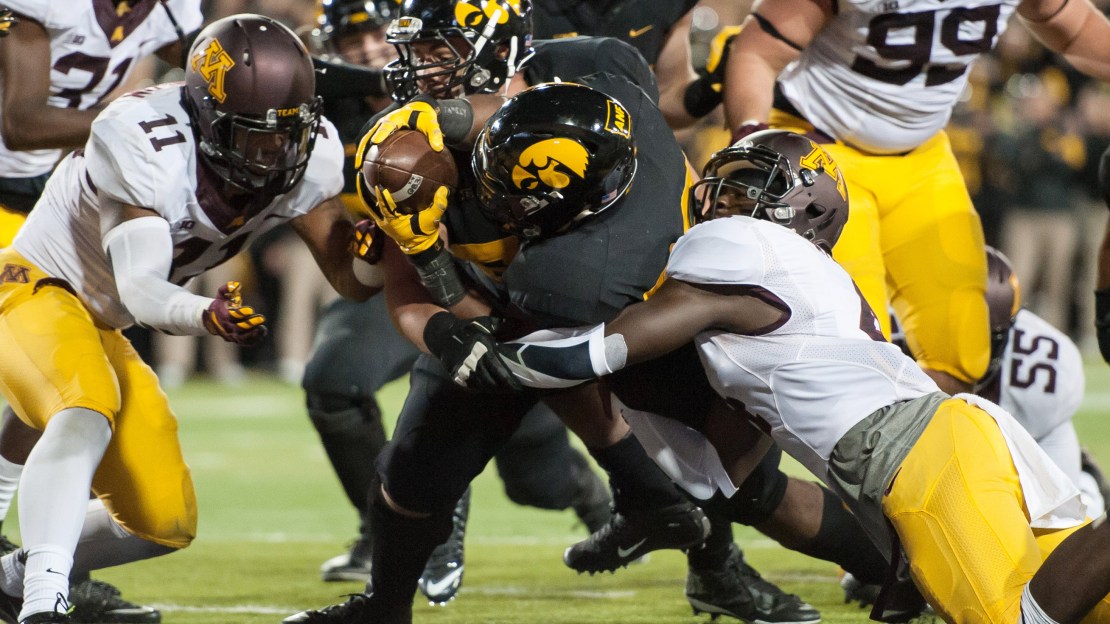 What a day of Big Ten football!

Fans were treated to some outstanding plays, incredible finishes, and of course, plenty of great individual standouts.

Here are my top 10 individual performers from Week 11 of the Big Ten football season.

1. Jake Rudock, QB, Michigan. This guy was simply amazing in Michigan's 48-41 win over Indiana. The Wolverines' senior quarterback completed 33-of-46 passes for a career-high 440 yards and six (yes, six!) touchdown passes in the victory. Rudock's six TD passes set a new Michigan school record. What a special talent this kid is.

2. Jehu Chesson, WR, Michigan. Someone had to be on the receiving end of Rudock's 440 yards and six touchdown passes, right? That honor went to Jehu Chesson, who hauled in an eye-popping 10 catches for 207 yards and four TD grabs, all of which were career highs. This guy has become one of the best wide receivers in the Big Ten this season.

3. LeShun Daniels, RB, Iowa. Daniels had a career day in Iowa's memorable 40-35 win over Minnesota on Saturday night. The Hawkeyes' talented back rushed for a career-high 195 yards and three touchdowns as Iowa improved to 10-0 for the first time in school history. Daniels' 51-yard touchdown run with 2:01 left was a career-high and helped seal the win for Iowa.

4. Jordan Howard, RB, Indiana. Howard was unstoppable when the ball was in his hands. The UAB transfer rushed for a season-high 238 yards and two touchdowns in the Hoosiers' 48-41 loss to Michigan in double overtime. Howard's 238 rushing yards were the fourth-most against a Jim Harbaugh-coached college team. That's impressive.

6. Raekwon McMillan, LB, Ohio State. McMillan is having a monster season, and he was outstanding again on Saturday. The Buckeyes' middle linebacker recorded 14 tackles, while adding a fumble recovery and a sack in the Buckeyes' 28-3 win over Illinois.

7. Anthony Walker, LB, Northwestern. Walker had another big game this weekend, this one coming in a 21-14 win over Purdue. The Wildcats' linebacker recorded a game-high 14 tackles, two of which were for a loss, and forced a fumble in the victory.

8. Josey Jewell, LB, Iowa. Another week. Another big game for Josey Jewell. This one came on a huge stage as the Hawkeyes' linebacker recorded a game-high 13 tackles, a sack and a pass breakup in Iowa's win over Minnesota in a primetime matchup. What a special talent.

9. Riley Bullough, LB, Michigan State. This guy has been quiet as of late, but Bullough had a big game in Michigan State's 24-7 win over Maryland on Saturday. The Spartans' middle linebacker had seven tackles, a sack, and an interception, which he returned 44 yards for a touchdown. That's called stuffing the stat sheet.

10. C.J. Beathard, QB, Iowa. Beathard continues to impress every week. He was great again on Saturday in Iowa's 40-35 victory over Minnesota. The Hawkeyes' signal caller completed 18-of-26 passes for 213 yards and added 50 rushing yards and two scores in the win.