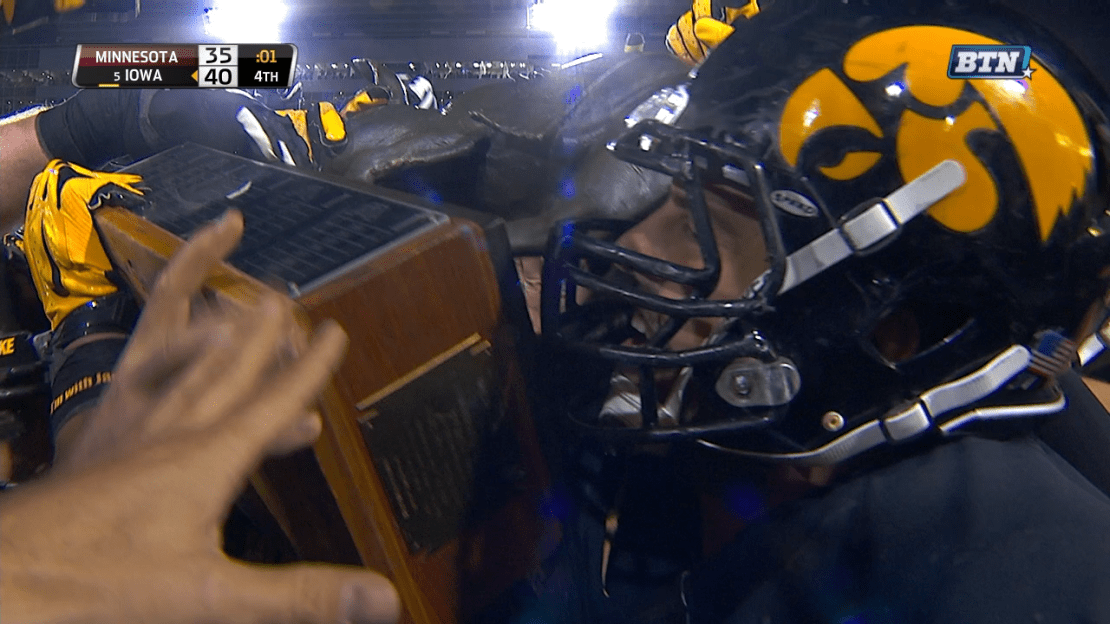 No big shocks this Saturday in the Big Ten, as Ohio State and Iowa remained unbeaten. Nebraska won two games in a row for the first time, while Michigan State got back on track, Michigan won the wildest Big Ten game of 2015 and Northwestern pushed its winning streak to three.

Biggest surprise: It wasn?t a shock that Indiana pushed Michigan to the limit in a double-overtime Wolverine victory. But it was a shock to see the Hoosiers rip through Michigan?s defense for 307 yards rushing with Jordan Howard notching 238. It was also equally stunning to see Wolverine QB Jake Rudock throw a school single-game record six TDs, hitting 33-of-46 passes for 440 yards.

Biggest disappointment: Indiana had to feel bummed about letting Michigan win in double overtime. IU has now lost 20 games in a row to the Wolverines. This one will hurt for a while, as the Hoosiers have lost six in a row after a 4-0 start as they look to become bowl eligible for the first time since 2007.

Play this again: Michigan?s 48-41 double-overtime victory at Indiana left fans clutching their chests. The teams lunged and parried back and forth, combining for 1,109 yards. The Wolverines did their damage through the air (440 yards), while the Hoosiers did theirs on the ground (307).

Never play this again: Nebraska?s 31-14 win at Rutgers lacked much drama, as the Cornhuskers raced to a 21-0 lead in the second quarter and never looked back. RU had just 259 yards.

Ohio State. The preseason is over for the Buckeyes, who haven?t been overly impressive most of the season but still find ways to win. Now, the season comes down to the next two weeks: Michigan State; at Michigan.

Iowa. The Hawkeyes won back Floyd of Rosedale. But more importantly, Iowa moved to 10-0 for the first time in school annals and moved one win closer to clinching the Big Ten West. The Hawkeyes can wrap it up with a victory vs. Purdue in Kinnick next week.

Michigan. After a great escape at Minnesota on Halloween, the Wolverines pulled another Houdini act at Indiana in taking a 48-41 double overtime win. The victory keeps Michigan?s hopes alive for the Big Ten East title.

Northwestern. That?s three wins in a row for the Wildcats, who are aiming for a nice bowl. This team does it the old-fashion way: With defense and running ball, as NU is 8-2 for the first time since 1996 and looks to win 10 games for the first time in school annals.

Nebraska. If you are keeping track in Omaha-and I know you are-that?s two wins in a row for the Cornhuskers. The bowl dream remains alive, needing just one more triumph for bowl eligibility after losing its first five games by 11 points. How great would it be for the Cornhuskers to cap their season with a Black Friday win over an unbeaten Iowa squad?

Purdue. Another Saturday, another loss. Darrell Hazell is now 2-20 in Big Ten action. If you can?t run the ball and stop the run ? you can?t win. It?s really that simple.

Michigan State. Yes, the Spartans won 24-7, but they didn?t really impress. MSU had 262 yards of offense, seven penalties and three turnovers. Connor Cook hit 6-of-20 passes for 77 yards with a pick before leaving the game at halftime with an apparent shoulder injury. (He should be OK.) This team brings little mojo into next week?s big game at Ohio State.

Maryland. The losing streak has hit seven for the Terrapins. Indiana and Rutgers are next, so maybe Maryland can finish on an up note.

Indiana. The poor Hoosiers dropped a crusher in double-overtime at home to Michigan in what would have been the program?s biggest victory since ? forever. Instead, IU is left to wonder what-if as it rides a six-game losing skid onto the road for its last two games at Maryland and at Purdue in search of bowl eligibility.

Rutgers. That is four losses in a row for the Scarlet Knights and five in six games. In that stretch, RU has allowed at least 31 points each game.

Minnesota. The Golden Gophers have lost four in a row, moving Minnesota one loss from being eliminated from bowl eligibility.

Northwestern RB Justin Jackson ran 24 times for 116 yards and a touchdown, which pushed him over 1,000 yards for the second season in a row.

Ohio State RB Ezekiel Elliott ran 27 times for 181 yards and two TDs. It was his 15th game in a row with at least 100 yards rushing.

Northwestern LB Anthony Walker had a game-high 14 tackles, two of which were for a loss, and forced a fumble.

Purdue QB David Blough completed 26-of-45 passes for 287 yards with a touchdown and an interception.

One play, one 68-YD Domonique Young TD for @BoilerFootball. Brought to you by @hotelsdotcom. https://t.co/xvSQPi6Ju5

Ohio State LB Raekwon McMillan recorded a game-high 14 tackles, while adding a fumble recovery and a sack in the Buckeyes? 28-3 win over Illinois.

Michigan QB Jake Rudock hit 33-of-46 passes for 440 yards with six touchdowns and a pick. Rudock?s six TD tosses were a school record. And his 440 yards passing were third-most in a game in school annals. Oh, and he led the team with 64 yards rushing.

5, turnovers for Maryland. The Terps now have 35 on the season.

109, yards receiving for Michigan?s Amara Darboh on eight catches for a TD.

2, TDs for Nebraska?s Cethan Carter. One was a rushing score, the first rushing attempt by a Husker tight end in four years.

28, interceptions tossed by Maryland, the most in the nation.

105, yards receiving for Minnesota?s Brandon Lingen on six catches with a TD.

30, Big Ten wins in a row for Ohio State. The sets and FBS record.