Dienhart: It all boils down to the last two games for Ohio State 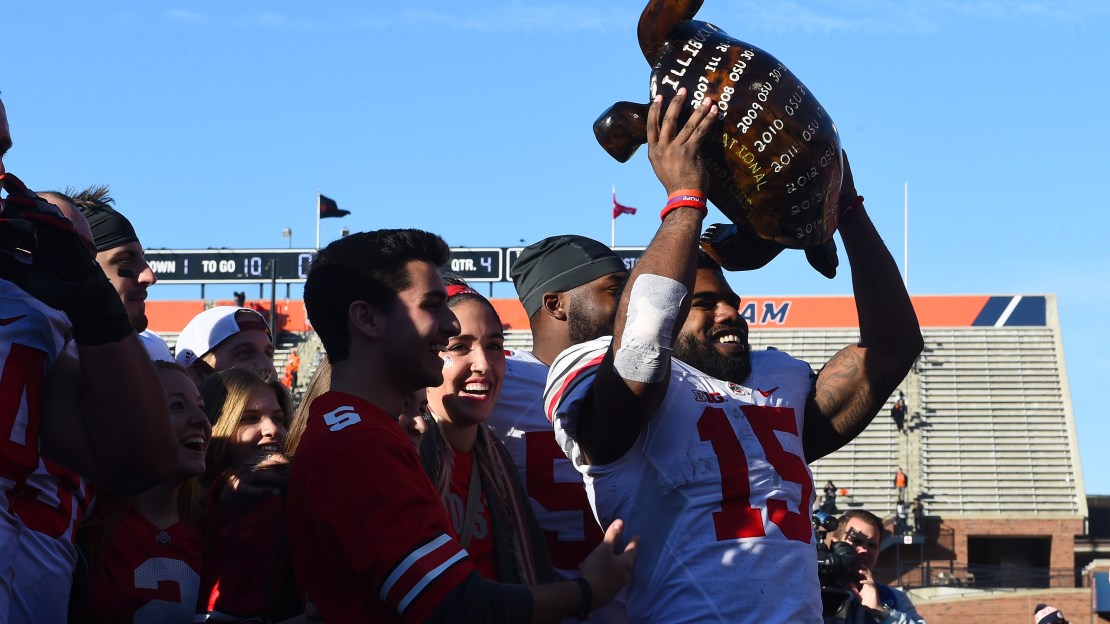 Another week, another win for Ohio State. That?s 23 in row for the Buckeyes and 30 in succession vs. Big Ten teams in regular-season games. This time, Illinois was the object in between Ohio State and its lofty goals, falling 28-3 to a Buckeyes squad that was just too good and too talented. Sorry, Illini.

Now, the real fun begins for Ohio State in its quest to stay unbeaten, win the Big Ten East, take the conference and defend its national championship. It all boils down to the last two games that hang on the Buckeyes to-do list: Michigan State and Michigan.

It seems America has been waiting for those two games for years. Now, the witching hour finally is upon us. Michigan State comes to Columbus next week with a resume that says ?9-1? but certainly isn?t as glistening as it looks. MSU hasn?t played like an elite team most of the season because of injuries. And now, the status of quarterback Connor Cook-4-1 vs. AP top-10 foes– may be murky after he suffered what appeared to be a shoulder injury in the win vs. Maryland that caused him to miss the second half.

Ohio State doesn?t care. The Buckeyes have had to wade through what essentially have been 10 ?preseason? games to get to this point. And, to Ohio State?s credit, it took care of business and arrived to mid-November unbeaten-while dealing with its own drama during what hasn?t always been easy going for college football?s ?it? program.

The Buckeyes have some scraps on them. They have been battered along the way to a 10-0 mark. It hasn?t been all smooth sailing for Ohio State to this point for a team which has rarely looked dominant-especially on offense. The quarterback position has been the biggest source of soap opera drama since the offseason. And, it continued right up to the opening kickoff of the season at Virginia Tech. Who would be the starter under center?

Cardale Jones got the nod ? but J.T. Barrett would get reps. For a time, there really seemed to be no rhyme or reason to when either would play-other than pulling a guy when he was struggling. Consequently, the offense often has been inconsistent.

The only constant has been running back Ezekiel Elliott. Quarter after quarter, game after game, the guy has delivered. While radio talk show hosts babbled incessantly about Cardale vs. J.T. and journalists furiously typed on their laptops about what the coaching staff should do about the quarterback conundrum, Elliott coolly and calmly churned out 100-yard games. He?s up to 15 in a row in what has become the quietest Heisman campaign in the history of the Heisman.

The 181 yards rushing by Elliott today is the 20th 100-yard rushing game of his career, which ties him for second-most all-time at Ohio State with Eddie George. Elliott also moved into third place on Ohio State?s all-time rushing list with 3,565 yards, passing Tim Spencer who rushed for 3,553 from 1979-82. Eddie George is second with 3,768. What?s it all mean? Elliott is an all-time great at a school with a lot of all-time great running backs. And that's impressive.

"I grew up in that era with Archie and Eddie, and somebody told me that on the sideline,? Urban Meyer said. ?Even to say that just kind of takes your breath away because I grew up watching those guys. I know that if I had any choice at tailback in the country, I got mine. I think I speak on behalf of my team. He's a tough guy."

Where would Ohio State be without Zeke? Scary thought, huh?

Finally, a week before Halloween, Barrett was anointed the ?man? at quarterback-then promptly got arrested for an OWI and suspended for a game, adding another juicy chapter of drama to this strange ride for the Buckeyes.

Barrett was back this week for Illinois. He hit 15-of-23 passes for 150 yards with a touchdown and pick. He also ran 16 times for 74 yards and score. It was a classic J.T. Barrett line. A little bit of passing ? a little bit of rushing ? and awhole lot of leadership and mojo.

"I wouldn't call it exceptional, because I think he got pressured a little bit,? Meyer said. ?But he is a very good tempo quarterback, and that's something we are evaluating too. We need to do more of that. He manages the offense very well. The only negative of the whole night, even the interception, is that he was hit, our pass protection. We are going to work extremely hard on that."

The timing of Barrett?s emergence couldn?t be more perfect with the season and all its delicious potential payoffs hanging within reach.

?Our defense is playing lights out, and that's obvious,? said Meyer of a unit that allowed just 261 yards to Illinois and is seeing end Joey Bosa come to life down the stretch. ?The only issue that I have, I think, is to control the line of scrimmage on both sides. The negative is that every time we have to be more balanced as we are getting ready. We know what is coming down the road next week, and have to be a little bit more balanced than we were. That starts right now with pass protection. That's the only negative. The positive is controlling the line of scrimmage and the run game, and our defense just did a marvelous job. Really that's back-to-back weeks of playing excellent."

On to the Michigan State game ? finally.