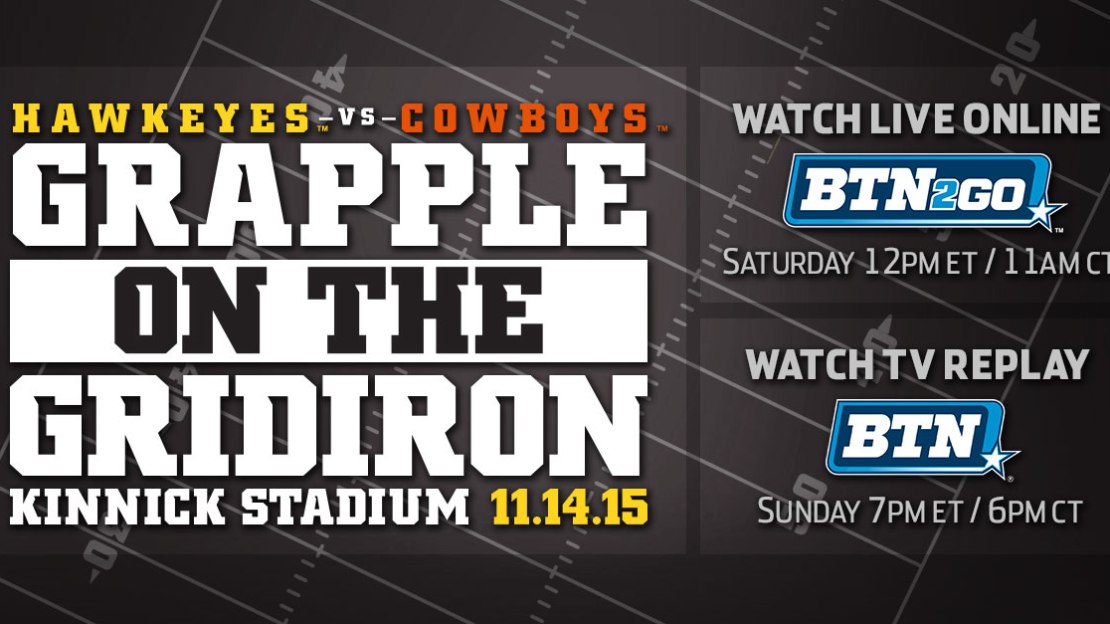 Remarkable days in time are measured by their impact far beyond those 24 hours. The stage is set. This Saturday, college wrestling's two most storied programs collide when the top ranked Cowboys of Oklahoma State invade the heartland to battle No. 4 Iowa at Kinnick Stadium.

It's great to have powerhouses meet early on – similar to when college football and basketball teams meet up early to create a buzz. I think about all the memories that will be made this weekend in Iowa City between family, friends and wrestling fans. These are the kinds of days that are talked about decades down the line as many fans will hit both the wrestling match and the football game.

In short, it will be a very cool day.

[ WATCH LIVE: Click for the direct link to watch Grapple on The Gridiron live Saturday on BTN2Go.]

The Hawkeyes have been involved in 49 of the top 50 dual meet crowds in NCAA history. Billed as the ?Grapple on the Gridiron,? Iowa will help set the national attendance record for the twelfth time. With the forecast calling for sunny skies and temperatures in the 50's, this historic 50th meeting between Pistol Pete and Herky the Hawk will break the record of 15,996 that Penn State and Pittsburgh set nearly 2 years ago.

As of Tuesday, over 32,000 tickets have been sold and the anticipated nice weather should add thousands. Iowa has led the nation in attendance for nine consecutive seasons and this event will make them all but a lock for 10 straight. Wrestling will once again ignite the flame on what could go down as one of the best days in Iowa sports history. Just hours after the wrestling match, the undefeated Hawkeye football team hosts rival Minnesota, a key game in the College Football Playoff landscape.

Iowa and Oklahoma State are college wrestling's most storied programs. The numbers are nearly impossible to truly comprehend and appreciate. The teams combine for 57 team national titles with the Cowboys claiming an unprecedented 34 (seven more than any other NCAA individual sport) and the Hawks with 23. No other school has more than eight wrestling championships.

Iowa is coming off a second place team finish last season, making it eight years in a row the Hawks have earned a team trophy, the longest active streak in the country. The last time the Hawks took a championship trophy back to Iowa City was 2010.

Oklahoma State finished seventh last March in St. Louis and is looking for its first team title since 2006 when it won four straight. Oklahoma State boasts 139 individual national titles and 444 Cowboys have stood on the podium as All-Americans. The Hawkeyes meanwhile have claimed a total of 81 individual crowns while earning 313 All-American honors.

The Cowboys lead the all-time series 27-20-2, but Iowa has outscored OSU 54-13 in winning the last two contests, including a 30-7 victory back in January of this year in Stillwater. The 30 points were the most by an Iowa team against OSU since 1995. Iowa raced out to a 19-0 lead and had their arm raised in eight of the 10 weight classes.

When you look at the depth, recruiting ability, graduation and how these teams choose to manage their redshirts, things can change in a hurry.

Lets get to the meat and potatoes of this showdown. According to the latest Intermat rankings, the Cowboys have eight wrestlers ranked in the top 15, while the Hawkeyes have six. It looks as if we'll see three matchups where both guys are ranked in the top 10 with Iowa having the advantage on paper in two of those.

Assuming the meet starts at 125 pounds, the first match will be huge in setting the tone. No. 4 Thomas Gilman of Iowa and seventh-ranked Eddie Klimara. Gilman added a bonus point in the dual last season with a 15-5 major. I expect a closer match on Saturday.

Cory Clark is currently the highest ranked Hawkeye (No. 2 at 133 pounds). Last season, Clark gave Iowa a finalist for a 26th straight year, dating back to 1990. The national runner-up must get to his offense and get bonus points for Iowa. I would expect Oklahoma State to send out NCAA qualifier Gary Wayne Harding. True freshman Kaid Brock beat Harding at a tournament last weekend 10-4.

I'm interested to see what OSU decides to do at 133 with Brock and at 157 with Joe Smith. At 141, the Cowboys have top -anked Dean Heil. The sophomore finished fourth at his first NCAA championships last March. Earlier this week, Iowa head coach Tom Brands confirmed Logan Ryan would get the call for the Hawkeyes at 141. This is an interesting dual from the standpoint that of the 10 weights, five of them have a pretty heavy favorite. It goes without saying that for those favorites, winning is not enough. You can not leave points on the mat. As with any high level match, bonus points are golden.

In the second of the top 10 matchups, Iowa will have All-American and 3rd-ranked Brandon Sorensen, while OSU counters with Anthony Collica, an NCAA qualifier last season up at 157. Sorensen is coming off a very impressive redshirt freshman campaign where he finished as a Big Ten runner-up and fourth in St. Louis.

The 157 pound weight class is the most up in the air weight class heading into this dual. Iowa has a couple guys who may get the call. Will it be senior Edwin Copper or redshirt freshman Skyler St. John? I would expect Cooper, but that is a guess on my part. Across the way, OSU has options with Chance Marsteller, Ryan Blees or true freshman Joe Smith. Last week, Smith defeated both at the Oklahoma College Open. I have a gut feeling we will see Blees. God only knows who will be toeing the line Saturday at 157. Regardless, this match will play a big role in the outcome of this
match.

At 165 for Oklahoma State looms the preseason favorite for the Dan Hodge Trophy, two-time NCAA champion Alex Dieringer. The senior is a bonus points machine. He scored bonus points in 28 of his 33 wins last season. Dieringer is a combined 65-1 the last two seasons, his last loss coming back in January, 2014 to Iowa's Derek St. John in the Iowa/Oklahoma State dual inside Carver Hawkeye Arena. It will be a tough task for either Patrick Rhoades or Burke Paddock to keep Dieringer from scoring bonus points.

The match that I am most looking forward to is at 174 pounds. Kyle Crutchmer, fifth on the podium last season for the Cowboys, and Alex Meyer for Iowa. The sixth ranked junior has been behind Mike Evans and now will get his chance to be the man. Last year, Meyer scored a couple wins against top-10 guys while filling in for Evans. I'm excited to see what he can do and he'll have a monster opportunity when he opens his season against Crutchmer. I can't wait for this match! I'm interested to see where these guys stand in mid-November.

Expect another battle at 184 between No. 12 Sammy Brooks and either 15th ranked Jordan Rogers or Nolan Boyd. Boyd beat Brooks in the dual last season. I'm really interested to see what kind of progress Brooks has made following a disappointing NCAA tournament in which he went 2-2.

Iowa is a heavy favorite at 197 pounds with two-time All-American Nathan Burak, ranked fourth, while OSU has a similar advantage at heavyweight with Austin Marsden, an All-American two years ago who currently holds down the No. 5 spot in the rankings at heavyweight. Like Brooks of Iowa, Marsden has something to prove and a big win out of the gate in this kind of environment would be a good start.

I'm looking forward to seeing how this thing shakes out. As Tom Brands often says, ?I don't make predictions.? If things went their way, I would not be surprised at all if Iowa won six matches. Having said that, I could also see the Cowboys winning seven matches. The Hawkeyes will have to weather a couple storms, especially at 141 and 165.

They are all big, but I again point to 157 and 174. I also think Gilman and Clark getting off to a good start is huge for Iowa, especially to keep the crowd jacked up. Every match comes with an entirely different set of circumstances from the last. We can break down the numbers and analyze things until we are blue in the face. Who is going to have the courage to take it from the other guy?

It's been fun to talk about this dual the past few months, but the time has come to get on the mat and let things fly. Lets do this!

It's only mid-November, so regardless of what happens Saturday, there is still a long ways between now and New York City in March. But, make no mistake about it, this is a big time match and both teams want to represent themselves well. Both teams have their hammers and they each have a few question marks as well. It's going to be a great day for wrestling and I applaud all involved for making this happen. Wrestling needs this!

Wrestling needs to somehow do a better job of making more than just a handful of days a year really special and this day is big. This event will make an impact moving forward.