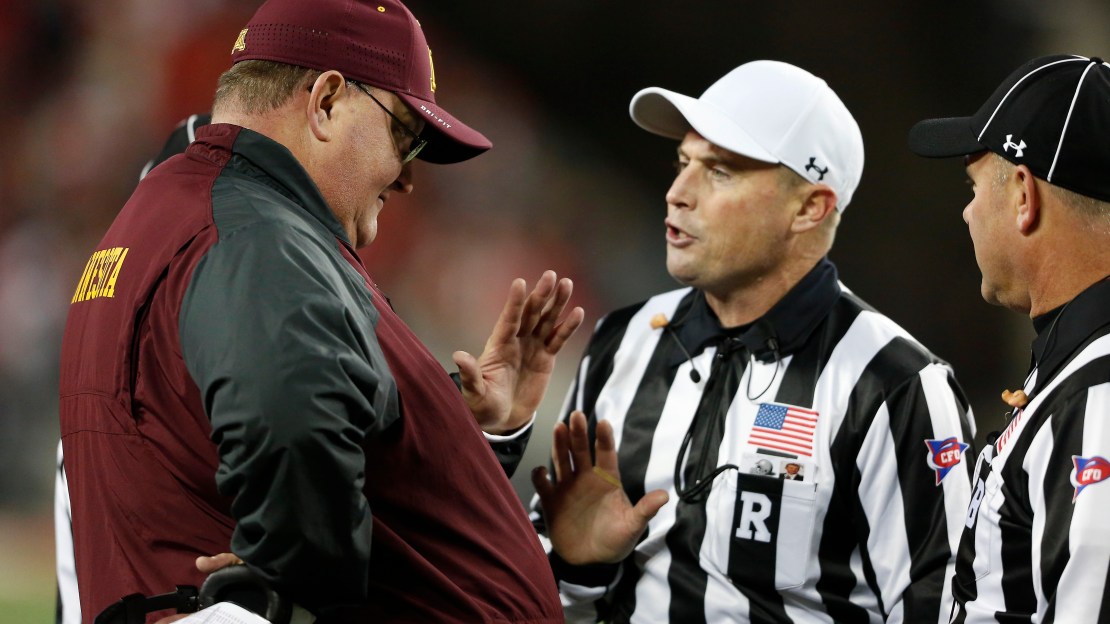 Just when you thought the Big Ten season couldn?t get any more exciting, boom! Nebraska upsets previously unbeaten Michigan State at home. Iowa eeks out an eight point win at Indiana. Wisconsin gets a stern test at Maryland and comes away winning by a touchdown. Ohio State finds itself in a one-score game in the fourth quarter in Columbus against Minnesota before winning by 14. And then Northwestern lets a 20-7 lead slip away ? to eventually win on a last second field goal against Penn State, 23-21. As the adage goes, ?any given Saturday?.

Aside from the theatrics, Illinois got one step away from bowl eligibility with a convincing victory at Purdue and Michigan picked up its seventh win of the season with a 33-point win over Rutgers.

This weekend presents a tripleheader of games on BTN, beginning with Purdue taking on Northwestern in Evanston at noon, followed by Nebraska making its first-ever trip into New Jersey to take on Rutgers at 3:30pm, and in the nightcap, Minnesota tackles undefeated Iowa at 8pm (all times eastern).

With 12 Big Ten teams in action on Saturday, here are five facts to ponder when you tune into BTN this weekend.

Despite some unfortunate recent injuries, Iowa continues to spawn out great production on the ground. Senior leading rusher Jordan Canzeri missed his second straight contest with a high ankle injury last weekend at Indiana. Meanwhile, redshirt sophomore running back Akrum Wadley posted 120 rushing yards on 11carries and a touchdown against the Hoosiers before leaving the game with an ankle sprain. However, junior LeShun Daniels was able to help carry the load the rest of the way as he posted 78 yards on 23 carries and a pair of touchdowns. Despite having to use a variety of rushers in the backfield over the last few games, the Hawkeyes continue to have the league?s second-most potent rushing offense, averaging 205 yards per game on the ground. This is currently Iowa?s highest season rushing average since 2002 (214.2 ypg). All three of those previous named rushers for the Hawkeyes have posted at least 300 yards on the ground and three rushing touchdowns this season. Of all teams in the nation, only Michigan State and USC have also had three different players go for at least 300 yards and three rushing scores.

Minnesota has joined the list of Big Ten teams who are relying more on the pass than on the run this season. Much like Wisconsin and Nebraska, the Gophers are trying to find a new identity in their offense with the loss of the explosive David Cobb from last season. And the numbers are perfect evidence of that transition. After passing on just 32.2 percent of their offensive plays last season, the Gophers have gone to the air on 50.6 percent of their plays in 2015. That +18.4 percent increase in the largest of any team in the FBS. And behind that passing attack is redshirt junior quarterback Mitch Leidner, who is currently in the midst of the best passing stretch of his career. He has thrown for 899 yards over his last three games; the most by any Minnesota QB over a three-game stretch since Cory Sauter had 909 between Sep. 14 - Oct. 5, 1996. With at least 250 passing yards against Iowa this weekend, he would become only the second player in program history to pass for 250-plus yards in four straight games: (Mike Hohensee - four straight in 1982).

Purdue has been surprisingly dangerous inside the opponent?s 20-yard line this year. The Boilermakers had scored touchdowns on twelve straight red zone trips in Big Ten play, which was the longest streak in FBS, before coming up short on a fourth down play in the fourth quarter against Illinois last weekend. Nonetheless, Purdue has scored touchdowns on a league-high 74 percent (20-of-27) of its trips into the red zone this season; the seventh-highest mark in the FBS. They have also scored touchdowns on 92 percent of their red zone trips during conference play; the highest mark of any team in the nation. And some of the Boilermakers' red zone success should go to redshirt freshman quarterback David Blough, who has accounted for nine of Purdue?s last 13 touchdowns over their last four games. With nine passing touchdowns and four rushing scores on the season, only UCLA?s Josh Rosen (14) has been responsible for more touchdowns this season among all FBS freshmen.

When the ball is kicked off to Northwestern, try and keep an eye on sophomore Solomon Vault. That is, if you don?t lose sight of him once he takes off running. Vault had a 96-yard kickoff return for a touchdown in last weekend?s win against Penn State. It was the longest kickoff return by a Northwestern player since Jason Wright returned a kickoff 100 yards for a TD against TCU on Sep. 7, 2002. For Vault, it marked his third career kickoff return touchdown, which breaks the Northwestern school record. He is the first Big Ten player to have three or more kickoff return touchdowns in his first two seasons since Indiana?s Marcus Thigpen, who scored all three touchdowns during his sophomore campaign of 2006. Vault?s league-leading 28.4 yards per kickoff return average is currently the eighth-highest among all FBS players with at least 15 returns this season, as well as the highest by any Northwestern player over the last 13 seasons.

Rutgers and its struggling offense is expected to get a big boost with the possible return of Leontee Carroo. After missing the last two games with an ankle injury against Ohio State on Oct. 24th, he was updated to ?probable? for this weekend?s matchup with Nebraska. Carroo has only played in 15 of 36 possible quarters this season due to the injury and two separate suspensions, but he has caught three touchdowns in three of five contests he has appeared in. He is the first Big Ten player with at least three games with three TD catches in a season since Purdue?s Taylor Stubblefield (three) in 2004. And boy have the Scarlet Knights struggled offensively without their most dangerous weapon. Rutgers has been held to fewer than 300 yards of offense in each of its last three games, the first time that has happened since a four-game streak in 2010. Starting quarterback Chris Laviano?s numbers without Carroo this season are also staggering. In four games without his main target, he has averaged just 116 yards per game through the air while throwing just two touchdowns and six interceptions.