Week 11 previews: Floyd of Rosedale under the lights? Yes, please! 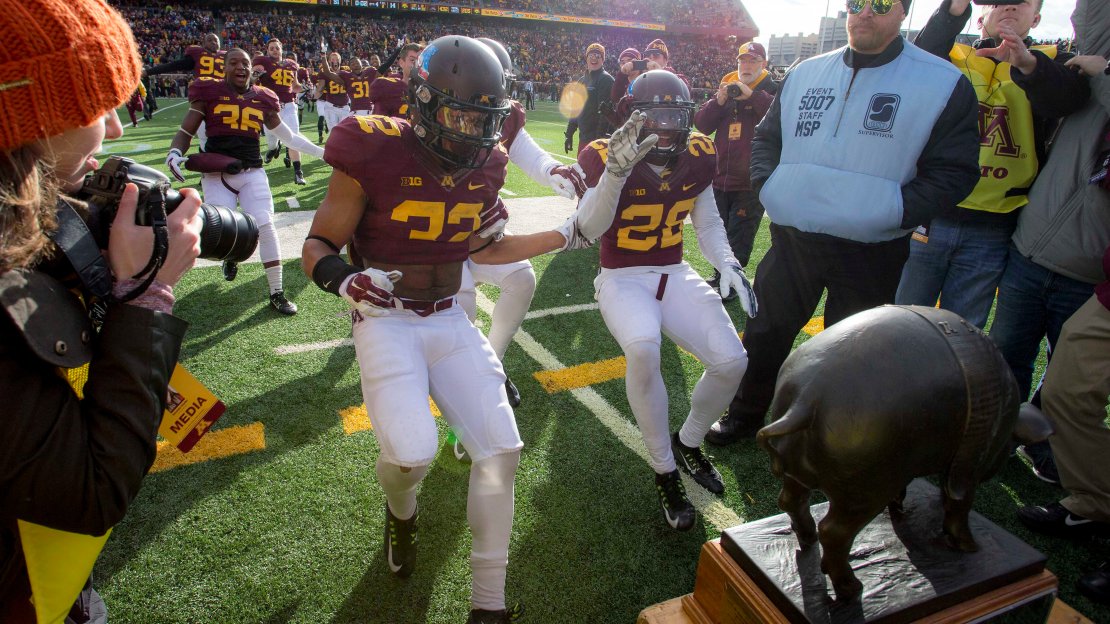 The stretch run is heating up. Can Ohio State and Iowa stay unbeaten? Will Nebraska finally win two in a row? Can Michigan State get back on track?

No. 5 Iowa hosts Minnesota in the biggest game of the week at 8 p.m. ET on BTN (watch on BTN2Go). The Big Ten West-leading Hawkeyes will look to reclaim the coveted Floyd of Rosedale trophy following a disappointing loss last season at Minnesota.

Wisconsin and Penn State are off this week, resulting in a six-game Big Ten slate.

After a two-game losing skid, Northwestern has two nice wins in a row at Nebraska and vs. Penn State. NU has been excelling in tight games with four wins by nine points or fewer this season. A big key last week: RB Justin Jackson returned to form, as he ran for a career-high 186 yards against the Nittany Lions after struggling of late. QB Clayton Thorson got hurt last week (lower body) and was replaced by Zack Oliver in the first quarter. Thorson is expected to play Saturday. The Wildcats have won three of the last four meetings in the series but their loss came at home in 2010, the last time these teams have met at Ryan Field. The Boilermakers must regroup after a demoralizing blowout homecoming loss to Illinois that saw them outgained 595-263 and killed their bowl hopes.

A drama-packed season continues for the Fighting Illini, who saw A.D. Mike Thomas get fired this week after head coach Tim Beckman was canned in August. Bill Cubit has done a good job keeping this team on track. Illinois is coming off its most impressive win of the season, a 48-14 thrashing of Purdue that saw the ground game come to life with 382 yards. The return from injury of Josh Ferguson (133 yards rushing) helped, as he and true freshman Ke?Shawn Vaughn (180) ran through Purdue like a hot knife through butter. Ohio State will be considerably more challenging. The Buckeyes will arrive in Champaign riding a 29-game Big Ten regular-season winning streak, which is tied for the longest conference win streak in FBS history. OSU also has a national-best 22-game winning streak. J.T. Barrett was suspended last week after his arrest for OVI but will start. Ohio State has won 10 straight games in Champaign, last losing in 1991.

The Spartans are coming off a tough loss at Nebraska that knocked them from the ranks of the unbeaten. What will be MSU?s mind-set? The Spartans still control their destiny in the East. If they win out, they will be in Indianapolis for the Big Ten title tilt. However, it won?t be easy. After Maryland, Michigan State plays at Ohio State and hosts Penn State. If the Spartans win out, they will hold the tiebreaker over Ohio State and Michigan due to head-to-head wins. The defense must step up. MSU didn?t force a second-half punt at Nebraska and the d-line didn?t notch a sack, as the pass defense continues to flounder. The unit allowed a season-high in yards (499) and points (39) at Nebraska. The Terrapins have lost six in a row in what has become a lost season. Maryland leads the nation with 30 turnovers, averaging 3.3 turnovers per game. At that pace, the Terps would have 40 turnovers in 12 games, which would shatter the most by a Big Ten team in the last 20 seasons. More bad news for Maryland: It will be without star kicker Brad Craddock (wrist).

The loser of this game is out of bowl contention, as each squad has six defeats-though going to a bowl with seven losses is a possibility. Defense has been the undoing of the Scarlet Knights in the last four games. Against Indiana, Ohio State, Wisconsin and Michigan, Rutgers allowed 198 points and 2,068 yards. They have been outscored by 110 points in those four games. The Scarlet Knights are the second Big Ten team since 1970 to allow 48-plus points in four straight games. The only other team to do so was Northwestern, which did so in five straight games from 1981-82. The offense could use WR Leonte Carroo, who has missed the last two games with an ankle issue. The Cornhuskers are coming off a huge home win vs. unbeaten Michigan State. Can they build on it? The offense is rolling, ranking second in the conference in passing, averaging 281.2 yards per game. They will face a Rutgers team that just allowed Michigan?s Jake Rudock to throw for a career-high 337 yards. While the NU offense is rolling, the defense continues to have issues. The Huskers are 11th in the Big Ten in defense (431.0 ypg). The pass defense is awful, ranking second-to-last (319.1 ypg) and allowing 20 TD tosses.

For once, finally, the @Huskers came out on the right side of a close game. pic.twitter.com/rRlxood14l

The Wolverine are coming off their best offensive effort of the season, notching season-highs in points (49), total yards (487), and passing yards (337) in a romp vs. Rutgers. And the defense got back on track after two tough games, limiting Rutgers to just 225 yards with only 97 of those coming in the air. The Wolverines allowed just 3.8 yards per play and the only touchdown allowed was on special teams. This team is still hungry, as its East Division hopes are alive. Losers of five in a row, the Hoosiers are trying to right a listing ship and get to bowl eligibility. Defense continues to be an issue. The fewest amount of points allowed during a current five-game losing streak is 29. IU is allowing 41.0 points per game in that stretch. Another big problem: The fourth quarter, where the Hoosiers have been outscored 84-20 in the last five games. The Wolverines have been shaky away from Ann Arbor. They lost at Utah in the season opener, led only 6-0 at halftime at Maryland before putting the game away and needed a goal line stand on the final play of the game to win at Minnesota. Still, history is against IU, which has lost 19 straight games against Michigan-the second-longest active losing streak by a Big Ten team against another Big Ten team.

The battle for iconic Floyd of Rosedale resumes! The Golden Gophers are seeing a once-promising season slip away. Tracy Claeys had the ?interim? tagged ripped away and was named Minnesota?s head coach on Wednesday. The Gophers have played two tough teams under Claeys. They had Michigan on the ropes and made the Ohio State game interesting. Still, the Gophers lost both and their bowl hopes are in serious jeopardy. They have lost three straight and four of their last five after a 3-1 start. Injuries have been ruinous-especially along the offensive line. An inconsistent rushing attack has been a big issue. The team?s rushing totals in the last six game: 204, 74, 326, 65, 144, 33. This will be Iowa?s first home game against the Gophers since 2012 when Iowa won 31-13. The Hawkeyes have won six straight in this series in Iowa City, last losing in 1999. Iowa is rolling, searching for its first 10-0 start in school history. It can thank a deep collection of running backs for its success. Jordan Canzeri didn?t play for the second straight game last week because of an ankle injury and Akrum Wadley left the game with an injury as well. No problem, as LeShun Daniels was able to carry the load, running 23 times for 78 yards and two touchdowns.