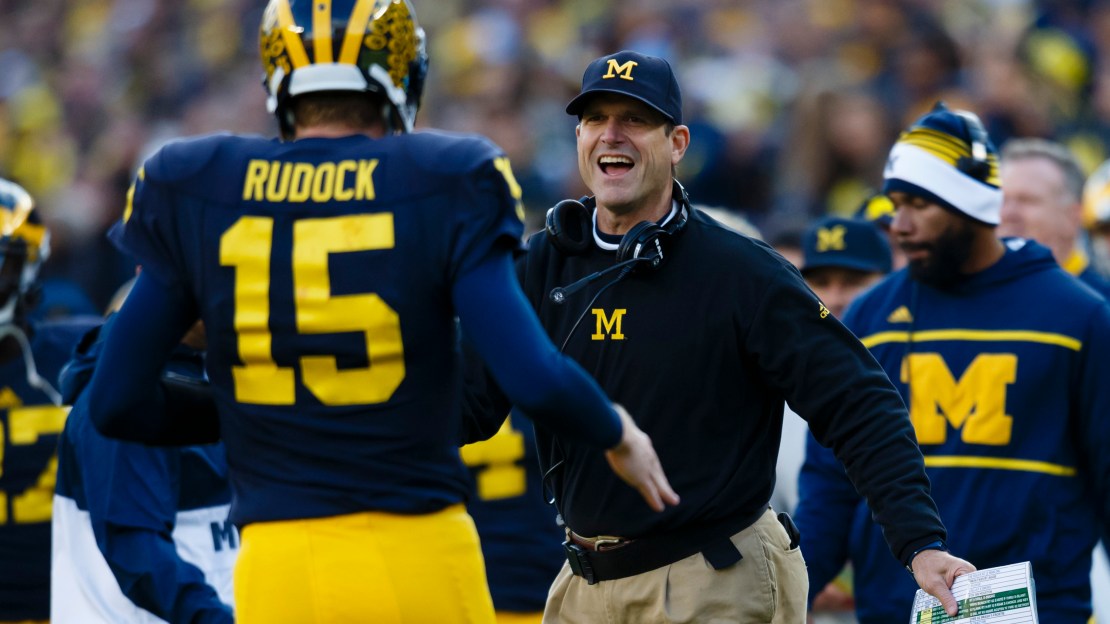 Why did Jim Harbaugh go for two points early in the third quarter when his team was up 25 points? Was it because the RU players talked some trash in the tunnel at halftime?

Speaking of Michigan, you had to be impressed with Michigan QB Jake Rudock vs. Rutgers. That may have been his best game yet coming off an effort at Minnesota in which he got banged up and knocked from the game. He showed toughness on a TD jaunt early on vs. RU, making the dash to pay dirt even though he was sore and knew he was gonna take a hit.

"That's a courage play," Harbaugh said. "Toughness is respected by everybody who plays this game.

It?s all right there for Iowa: A chance to clinch the Big Ten West and play in its first Big Ten title game if it wins its next two games: Minnesota and Purdue, both in Kinnick. Do that, and the finale at Nebraska on Black Friday is moot. This has been one of the most surprising seasons by a Big Ten team that I can recall in a while in my lifetime. No one saw this coming.

Who has been Ohio State?s best player? Cleveland.com makes a case for safety Vonn Bell. Interesting. Better than Ezekiel Elliott?

"What (Bell has) done, we've always thought he had that playmaking ability," co-defensive coordinator Luke Fickell said. "What you've seen from him more is consistency, the way he practices, the way he studies, the way he goes about his business. He's really raised his level. The preparation has kinda fallen in suit with how's he playing on the field."

The great Mike Griffith of Mlive.com has four questions in the wake of Michigan State?s loss at Nebraska.

How much did the stunning lose impact the Spartans? playoff chances? Griffith notes the short answer is that MSU still controls its destiny to win the Big Ten championship, and one would think a one-loss Michigan State would somehow finish among the nation's top four by the time everything gets sorted out. But there are no guarantees, particularly if the Spartans don't start playing a better brand of football and winning games more impressively. MSU will need to win out and get help. Bottom line: There is hope-and a lot of football still to play.

Wisconsin had to be bummed when it found out RB Corey Clement couldn?t play on Saturday because of lingering issues with a sports hernia.

UW managed just 74 rushing yards on 14 carries in the first half and finished with 117 yards on 40 carries. That came one week after Clement rushed for 115 yards and three touchdowns on 11 carries in a 48-10 victory over Rutgers. The Badgers are off this week then host Northwestern on Nov. 21 and then closes the regular season Nov. 28 at Minnesota. Let?s hope Clement is available.

Dan Duggan of NJ.com has 10 takeaways from Rutgers? loss at Michigan.

It has been a tough run for the Scarlet Knights, who have been outscored 146-33 during a three-game losing streak. But RU still can earn bowl eligibility if it wins its last three: Nebraska, at Army, Maryland. It?s possible.

Illinois is just one win from bowl eligibility after an impressive win at Purdue. It was great to see RB Josh Ferguson play after he missed three games with injury.

Nice story from Zach Osterman of IndyStar.com on Tom Crean, who finally has found peace after 18 tumultuous months.

Osterman notes that Crean has weathered 18 months of turbulence, problems off the court and inconsistent performances on it. Through that, he and his staff have built a top-15 team, his most talented since the group ranked No. 1 overall in the preseason of 2012.

Great start to exhibition play for Purdue. While most people focus on newcomer Caleb Swanigan, don?t forget about sophomore Vince Edwards. He looks primed for a breakout and could be one of the team?s top players.

Edwards scored 18 points in 19 minutes on 6-of-9 shooting to lead a balanced, and largely mistake-free, offensive onslaught in a 92-43 win vs. some team called Northwestern Ohio.