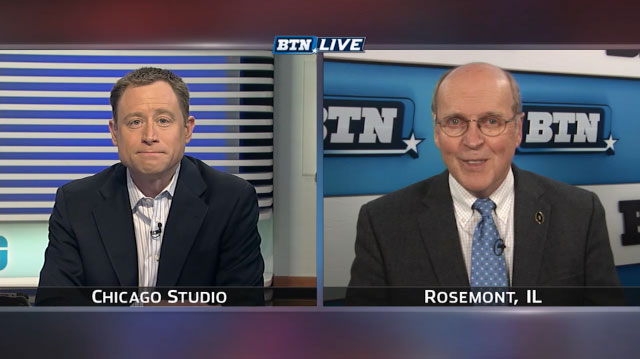 So, Pat Forde of Yahoo! Sports reports that Purdue will bring back Darrell Hazell. Honestly, I would have been stunned if Hazell wasn?t retained. It?s not Purdue?s M.O. to jettison a coach after three seasons. Plus, it would have cost the school over $6 million to remove him.

The injury issues for the Michigan State offensive line are well-documented. The unit sounds like it is getting healthy after the bye week with center Jack Allen looking good and ready to go. And, that?s huge, as the great Joe Rexrode of the Detroit Free Press points out.

When this unit is healthy, it is the best in the Big Ten.

Michigan offensive coordinator Tim Drevno ?absolutely? expects QB Jake Rudock to play on Saturday. So, there is that.

"He was good (Tuesday), he threw the ball around, breaking the huddle, he looked good," Drevno said. "He looked good to me. … Absolutely (I expect him to play), yes.

"I really do. Feel good about it."

Rudock, a 6-foot-3 fifth-year senior, has started all eight games for the Wolverines this season. After being knocked out of Saturday's contest at Minnesota in the third quarter by a serious hit from two defenders, Rudock left the field and received treatment from Michigan's medical staff inside the locker room. But, I will say this: If Wilton Speight had to play vs. Rutgers this Saturday, I think he would do OK.

Penn State?s Christian Hackenberg looks like a different QB. Here is a good film study of why.

He?s thrown for 1,415 yards with 12 touchdowns and no interceptions in his last six games. He?s also added two rushing touchdowns and a receiving touchdown in that span. He has 45 touchdown passes in his career and he needs two more to pass Matt McGloin for the most in school history. I am happy for ?Hack?.

The AP hoops poll came out earlier this week. And Ohio State wasn?t in it-or the coaches poll, for that matter. What happened the last time the Buckeyes weren?t in the preseason polls?

The last time Ohio State wasn't ranked? It was 2008-09 season. And the Buckeyes finished 22-11, fifth in the Big Ten, and earned an eight-seed in the NCAA tournament and lost to Siena. Not too bad for not being ranked. I think Thad Matta will prove ?experts? wrong this year-once again.

We all know about Northwestern?s quest to play in the NCAA tourney for the first time. But, do the Wildcats have enough talent this season to pull it off?

I think NU may have enough with guys like Vic Law and Alex Olah. I?m actually a little excited typing that.

In the wake of Mike Riley?s rough initial campaign, Rich Kaipust of Omaha.com takes a look at the debut seasons of Bill Callahan and Bo Pelini.

In 2004, after Callahan took over for Frank Solich, NU let a 5-3 season get away by closing 0-3, capped by a home loss to Colorado that snapped the Huskers? historic 35-year bowl streak. In 2008, after Pelini replaced Callahan, the Huskers were 5-4 after a humbling 62-28 loss at Oklahoma, but went 3-0 to finish November and took NU to the Gator Bowl on New Year?s Day. Just some perspective.

?We all agree with it,? said Daniels. ?That?s legit, so we all roll with it.

?We each bring different things to the table. Derrick is a good receiver out of the backfield. Akrum and Jordan are shifty guys. Me, I?m a big power runner.?

The Deadly Horsemen have combined for 1,423 yards, which would be first in the nation. The per-game average of 177.9 yards would be second. The 18 touchdowns would be first. I didn?t anticipate this type of production. Credit the o-line, too.

Indiana learned a few things in its exhibition hoops game.

How about freshman Thomas Bryant? He had a double-double with six offensive rebounds. His 5-of-16 shooting performance will need to improve. Still, his promise and talent are apparent.

Meanwhile at Purdue, the status of big man A.J. Hammons is unclear after he didn?t play in a recent scrimmage.

"He's got to take care of his business more than anything," Matt Painter said earlier this week. "He's a guy we need to lead by example and when you get old in a program, you can't just say the right things. You have to go out and lead by example. We'll see for this weekend."

The door being open for Hammons to play Sunday would indicate he is not suspended. Hammons is a senior. I thought he would be motivated to do everything right this year.

And finally, take a moment to read this: Good look at how the advice of Jerry Kill?s father helped him walk away.