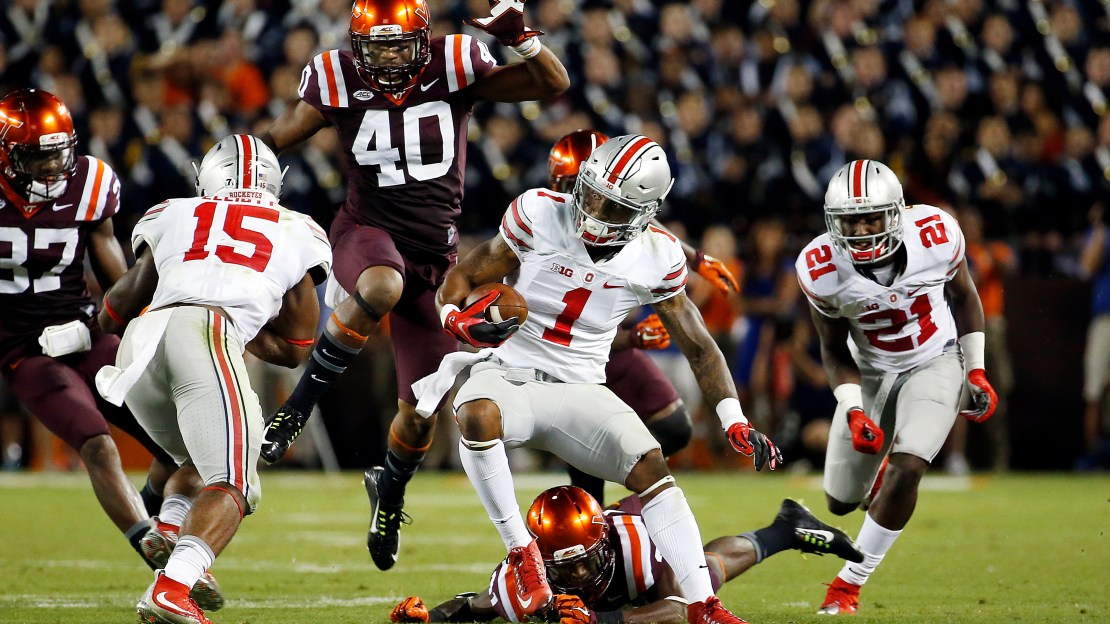 With J.T. Barrett suspended for this week?s Minnesota game, Braxton Miller will back up Cardale Jones. What are reasonable expectations for Miller? The gang at Cleveland.com debates it in this video.

Don?t be shocked if Miller takes some snaps. I sure as heck would use him under center. He?s the most dynamic weapon in the nation.

Mlive.com has a good look at some interesting numbers surrounding Michigan State. And here?s an interesting one: The Spartans haven?t lost a Big Ten road game in three years.

MSU last lost a Big Ten road game on Oct. 20, 2012, at Michigan. Since then, it has won 12 straight conference road games, a school record that is four games longer than any previous streak in school history. The streak is also tied for the second-longest active streak in FBS. Only Ohio State, at 13 games, has a longer conference road win streak. Since Mark Dantonio took over prior to the 2007 season, Michigan State is 25-9 overall in Big Ten road games, including 19-3 since 2010. Enjoy this golden age, Spartan fans.

That?s three losses in a row for Illinois. Now, its mettle will be tested beginning with the game at Purdue this Saturday. Will the losing stop? Well, it depends.

The past five months for Illinois, starting with the allegations of abuse and mistreatment by former Illini Simon Cvijanovic to the abrupt firing of former coach Tim Beckman a week before the season opener and the recent losing skid, have featured a whirlwind of adversity, one situation after another it seems like. So, a win would be nice to get Illinois back on the bowl track.

?This season is definitely going to go down as one of the most interesting ones we?ve had around here,? Illinois right guard Ted Karras said. ?We?ve got to end it on a good note.?

Rutgers WR Leonte Carroo tells NJ.com it has been a long season. He is right. But has there been a better receiver in the Big Ten? Nope.

Carroo missed the first half of the season opener as a result of a suspension for violating curfew during training camp. He then was suspended for the third and fourth games after his arrest on a simple assault charge that was eventually dismissed. And three weeks ago, he injured his ankle. When on the field, Carroo has been unstoppable. He has 24 catches for 527 yards and a Big Ten-leading nine touchdowns.

There wasn?t much for Penn State to complain about after a 39-0 win over Illinois except for the kicking. Joey Julius struggled with two PATs blocked and a kickoff out of bounds. He was pulled for Tyler Davis who made both of his field goals and three extra points. Now what? Stay tuned.

Wisconsin RB Corey Clement looked good in his return last week, but he?s still feeling pain after surgery that kept him out since the opener.

Clement, who underwent surgery Oct. 1 in Germany to repair a sports hernia, was told by the surgeon he could feel soreness for up to eight weeks.

"I'm still going through the process," Clement told Jeff Potrykus of the Milwaukee Journal-Sentinel. "It's only going on Week 5. I'm where I thought I'd be, a little sore but getting through it.
"I've got to push through it."

He looked pretty good last week playing for the first time since the opener, Clement rushed 11 times for 115 yards and three touchdowns in UW's 48-10 victory over Rutgers.

Beathard continues to deal with a right groin injury that he appeared to sustain during the second half of Iowa?s 29-20 win over Illinois on Oct. 10.

?It?s tough to try and get up there to 100 percent, because each week I?m starting to get a little bit better and better, and then I?ve got to play,? Beathard said, ?and then it goes back.?

If backup QB Tyler Wiegers ever has to take over for an extended stretch, I?d be worried.

Nice story from Ian McCafferty of InsideNU.com on Northwestern DE Dean Lowry, who has gone from a two-star recruit to a NFL prospect. I love stuff like this.

The great Tom Shatel of Omaha.com took a look at the letter Nebraska A.D. Shawn Eichorst wrote to fans in which he said the program was in rebuilding mode. Shatel wonders if anyone is buying it.