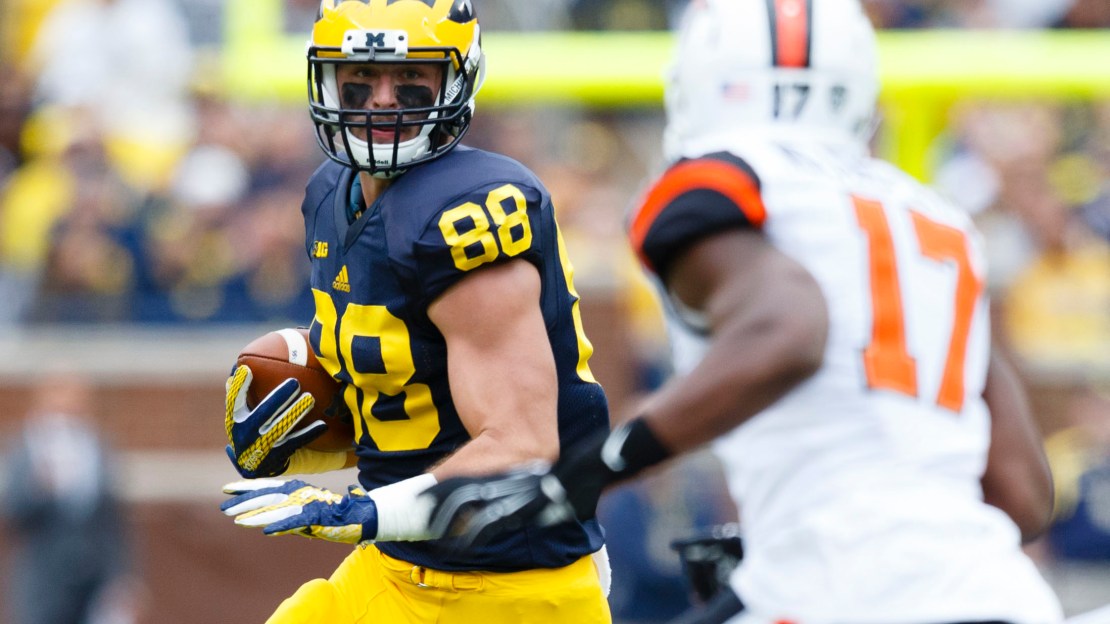 The Michigan offense remains a work-in-progress under first-year coach Jim Harbaugh. But one thing the Wolverines have been able to count on each week is tight end Jake Butt.

I caught up with Butt as Michigan prepped to play host to Rutgers at 3:30 p.m. ET Saturday on BTN (watch on BTN2Go).

Q: Have you been pleased with what you have been able to accomplish so far this season?
A: For sure. It has been a fun ride. I haven?t been this involved in the offense since I have been in college. I am definitely pleased with what I have done in the passing game. I am blocking better but it?s not where I?d like it to be. But I think I have gotten better as a blocker these last few weeks.

Q: So is this a more tight-end friendly offense than it was in the past?
A: Yes. The old staff played a lot of tight ends, but we would be decoys to get other guys the ball. There are a lot of plays in the game plan where the tight ends are the primary read.

Q: What has Jake Rudock meant to the offense?
A: He goes on in huddles calling out a play that may take eight or nine seconds. We are calling two or three plays in the huddle with checks, kills and alerts and all this. It takes a guy who is really locked in and cares about the team and program to run something like that. It?s a tough, tough offense. Jake means everything to our team, just to be able to execute it at the level that he has this whole season.

Q: Will the offense be OK if he?s out for a while and Wilton Speight has to play?
A: For sure. Wilton is perfectly capable of leading this offense to victories. You don?t want to start thinking like that (Rudock being out). I think Jake will be just fine. Once he got settled in (at Minnesota), (Speight) led our offense and was 3-for-3 on that last drive with a touchdown. He showed what he could do.

Q: Were you nervous the first time you met Coach Harbaugh?
A: Absolutely. I think everyone was. When he walked into the team room for the first time, you could have heard a needle drop. It was nerve-wracking. You hear all the stories about how intense he is. He came in and set the standard right off the bat.

Q: Any stories of how competitive he is?
A: When he wants something done in practice and we aren?t doing it right, he wears cleats and gets out there and shows us. He doesn?t move as good as he used to, but he?ll go out there and show us how to run a route. And he?ll show you how to block. Once, he was talking about the importance of down blocks in a team meeting. He demonstrated by punching the podium and knocking it over and breaking a few other things. When we were at Cracker Barrel, he got mad when he couldn?t beat this peg game and get it to one peg. He was genuinely mad at himself when he couldn?t get it down to one peg.

Q: Did you envision Jabrill Peppers being this big a part of the offense?
A: I really didn?t. No one knew what he would mean to this offense. We always wondered if we were going to use him on offense. We didn?t have too many packages in for him early in the season. These past few weeks, he has been a huge asset to our offense.

Q: What did you do the night after the Michigan State game?
A: It was my roommate?s birthday, so we had a bunch of family in town, 20-30 family and friends. We grilled out and had a bonfire. It was good to spend time with family after something like that.

Q: Were you surprised Minnesota went for the win Saturday night?
A: No. I think that is what you have to do at that point when you are that close to the goal line. You have to go for the win in that situation. But you don?t know if it?s the best call going with the quarterback sneak against into the teeth of our defense.

Q: What were your emotions when you saw the defense stopped Minnesota?
A: We talked about how bad it felt last year when they ran over and took the Jug. So we wanted to the same thing to them. When we saw we stopped them, we ran over there as fast as we could.