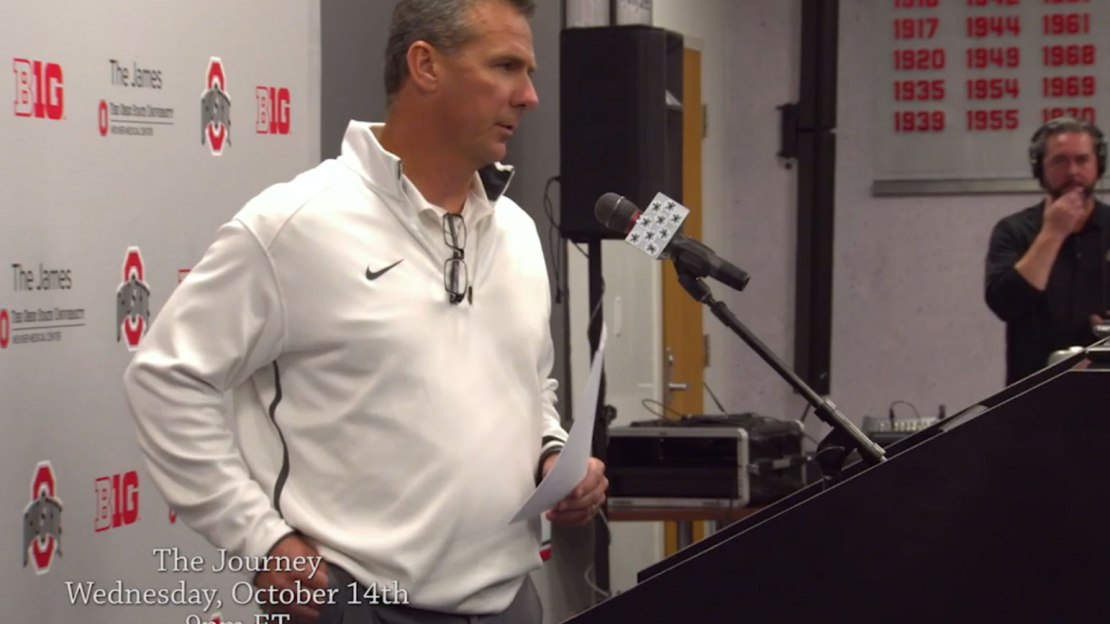 So, J.T. Barrett will forfeit his scholarship?

On Monday, Urban Meyer said that Barrett would have to complete counseling through the school and would also forfeit his scholarship for a term. But, Barrett will remain a captain. OK. I guess I don?t see the connection with getting arrested for OWI and having your scholarship revoked. Seems unprecedented for such a transgression in all my years in the business. Interesting.

Did Purdue have a breakthrough win vs. Nebraska? The great Pete DiPrimio of the Fort Wayne News-Sentinel checks it out.

?It will certainly help,? Darrell Hazell said. And then, ?From this point on, it?s not about patting yourself on the back. It?s about coming back to work and getting ready for the next game. That?s how you build, week in, week out. You?re not satisfied with the results. You keep moving forward.?
But lose at home to Illinois this week, and it all goes out the window.

To say Mike Riley?s debut isn?t going as planned would be a massive understatement. Nebraska is 3-6 and in peril of finishing with a losing record. How bad have things gotten? Cornhusker A.D. Shawn Eichorst has posted a letter of fans on the school?s website.

But Lee Barfknecht of Omaha.com thinks Eichorst owes it to fans to speak after the program suffers what he calls its worst loss in 60 years.

No doubt, Jabrill Peppers has emerged as a key two-player for Michigan. He?s doing a lot. Even Jim Harbaugh admits as much. How long can this go on for? And, it?s quite an indictment of the lack of playmakers on the Michigan offense if a defensive player has to be used this extensively on offense.

Where would this attack be without QB Jake Rudock? He has been a key cog who is making progress from an injury that sidelined him last week at Minnesota.

Speaking of Harbaugh, he provided another gem yesterday when he said he takes a vitamin every day ? a steak.

Indiana?s Kevin Wilson says his team?s Sunday practice was one of the best of the year as it comes off a bye. Hmmm. Could this be a build-up to the Hoosiers stunning visiting Iowa this Saturday?

Illinois is sinking, losing three in a row. And, the Illini are seeing their bowl hopes slip away, too. Blame it on a struggling offense that can?t run the ball. And is this team tired?

The lack of depth at several key positions for the Illini is apparent. Cubit said he wasn?t sure after Saturday?s loss if running back Josh Ferguson, who has missed the last three games after suffering a first-quarter shoulder injury against Nebraska on Oct. 3, will play next Saturday at Purdue.

?I talk to him every day about how he?s feeling,? Cubit said. ?When he feels like he?s ready to go, he?ll go.?

It?s Tuesday, but the sting of that loss to Michigan remains for Minnesota. Interim coach Tracy Claeys says he will learn from the experience and improve his clock management.

Joe Christensen of the Minneapolis Star Tribune says Claeys didn?t tab another coach to replace Jerry Kill as a second voice on clock management. Claeys became a committee of one, even though he?s a defensive coordinator, who has much to learn about the team?s offensive playbook.

While on the subject of Claeys, he doesn?t think his bosses should rush to give him the full-time job.

?I want them to feel good that I am the right person for the job,? Claeys told WCCO radio. ?It has to be a two-way street in order for it to work. So hopefully they?ll work through that process as quick as they can. And obviously the quicker it gets done, it does help recruiting.?

It would make sense to maintain continuity from Kill?s staff and give the job to Claeys. But, that?s just me.

Michigan?s defense had been a steel curtain most of the year, but Minnesota punched some holes in it and outgained the Wolverines 461-296. And Michigan allowed just 10 plays of 20 yards or more over first six games — but permitted 13 in the last two games. The great Nick Baumgardner of Mlive.com breaks it down.

Ari Wasserman of Cleveland.com wonders if Ohio State?s Raekwon McMillan is one of the top 10 linebackers in the nation. But is he even the best on his own team? Darron Lee and Joshua Perry also are pretty good.